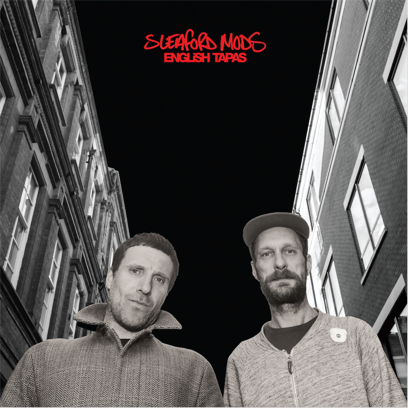 Sleaford Mods will release ENGLISH TAPAS, their first full-length for Rough Trade Records on March 3rd 2017. The album was recorded at Steve Mackey’s (Pulp) West Heath Garage studios in London. Previewed by last fall’s TCR EP, English Tapas will be supported by the band’s first ever North American tour, from March 30th to April 9th. All dates are below.

The album will be available on CD, Digital, and LP, with an initial pressing of the LP on red vinyl. There will also be a very limited edition cassette (150) – which will includes their 2015 set from Banksy’s Dismaland.

Jason Williamson discusses English Tapas: “Andrew walked into some random pub and saw ‘English Tapas’ scrawled on the menu board. Underneath this beautiful coupling of words were its components, half a scotch egg, cup of chips, pickle and a mini pork pie. It says everything about this fucking place. It’s comedy, it’s make do, it’s ignorant and above all, it’s shit”

Also coming next year is the definitive Sleaford Mods documentary film. Made by Christine Franz and titled Bunch of Kunst, it took over two years to film. It charts the rise of the band from back street pub venues to rock arenas. The film will be released in early 2017.

“This documentary film is the perfect antidote to those sexy, racy, rocknroll yawns most bands hide behind. We are indeed A Bunch of Kunst”– Jason Williamson