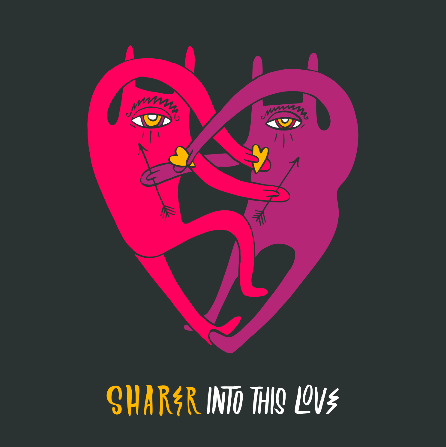 “I was so honored to start working with the amazing JD Samson. I have always been a massive fan of her work and now that we are bandmates, I get to both bear witness to and be a part of her outstanding open-mindedness and remarkably creative mindset. Never have I sung words with the same intensity as JD’s. It’s poetry, absolute poetry. “Into This Love” is, to me, an ode to the higher power that is love, a place that knows no gender, no religion, no social barricades, and no logic. I am so very INTO THIS LOVE.” – Nick van Hofwegen (Young & Sick)

“Into This Love” is a favorite for me, mostly because it was the song that made me realize what a great team Nick and I were. His arpeggiators were exactly what I had in mind to match the vocal melody, and we kept thinking in synch for the rest of the production and writing process thereafter. We aren’t stressed and that is clear in our songwriting. This project is fun for us and hopefully that feeling is apparent in the music. – JD Samson

Earlier in August, they released “Body Tonight, a track that has vocals by Jo Lampert (Tune-Yards, AVAN LAVA) and Xavier Smith, alongside Nick and JD.