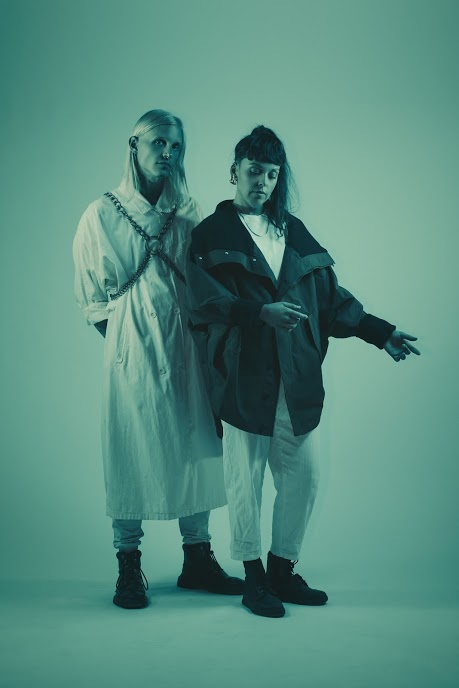 Los Angeles electronic and alt-R&B duo, Rituals of Mine release their SLEEPER HOLD (Remixes EP) on February 5th via Carpark Records  (Toro Y Moi, Cloud Nothings, Greys). Ahead of the album’s release they have shared a wonderful remix by Skylar Spence of the closing track, “Burst.” The song is now available via Carpark Records and streaming services.

Rituals Of Mine on Skylar Spence:

“I’ve been a fan of Skylar Spence for some time now and it just seemed like a perfect fit once we became label mates. I found out that we were mutual fans of each other and I was so excited to hear his take on BURST because of our polar opposite sounds. This remix is fun, it’s full of energy and really blows the roof off what fans have heard from us before. Stay tuned for more!”

“BURST,” “HEAVYWEIGHT,” and “BAD NEWS” are some of the first songs Terra Lopez wrote after feeling empowered to be more honest with herself. The sudden and tragic changes in her life forced Lopez to reconcile with old pains. The EP’s nightmarish yet self-assured first single “BURST” is Lopez processing her past traumas and demanding space that she has lived without for so long. “I am starting to realize that my story, my life is worth writing about, so this track is the first step.” Lopez explained about the track. “‘BURST’ is about reclaiming my story and showing up for myself.” The track’s haunting and staccato instrumental is in stark contrast with Lopez’s confident and melodic vocal delivery. Having the intimate space of a studio, occupied by only her and a producer, meant that Lopez could write from the heart in a way that didn’t feel possible when there were more people in the room. “This new material is very direct and focused on what I want to express with things I’ve held in for so long.” says Lopez. “It’s finally me addressing all of that trauma because I finally had the space to do so.”

Rituals Of Mine is the duo of songwriter Terra Lopez and live percussionist Adam Pierce. Inspired by ‘90s trip-hop, footwork, and downtempo R&B, Rituals of Mine has crafted a uniquely heavy sound that fuels its cathartic and uplifting performances. For the past decade that Lopez has been actively crafting music, multimedia art, and poetry, she has always seen her creative output as a necessary therapy. “For a long time I didn’t go to therapy, and I used music as a release.” explains Lopez. “I’m able to convey on stage what I can’t off stage, and these songs that we’ve written and performed—I’ve clung to them as a means of survival almost.”