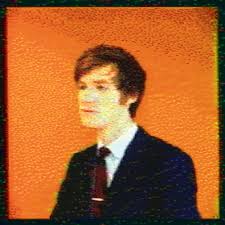 East India Youth the electronic artist also known as William Doyle is to release his second album Culture of Volume, which follows his Mercury Music Prize nominated album Total Strife Forever put out early last year. Mixed by Graham Sutton and with artwork by Dan Tombs, most of the album was recorded in Doyle’s home in London, UK.

Previously a part of the indie band Doyle and the Fourfathers, this recording name comes from the East India Docks area in East London. The ‘Youth’ part comes from the area and lively nature of the house he lived in; “…this place was the start of something new for me; I was creatively reborn”.

To open this release, “The Juddering” sees static noise jump about as noisy layers build and pulse. Following this instrumental opening, in “End Result” Doyle’s vocals navigate the melody with ease, and he ponders on the long notes; “The end result is not what was in mind, the end result is always hard to find”. The effect is a sweeping, moody track.

“Beaming White” is seductive track with the lyrics to match; “I cross the line you draw for me, diving into heady abandon where your limbs are enveloping, holding me down…” whilst “Turn Away” is a true synth pop number. “Hearts that Never” picks the pace up a notch with a constant rhythm made up of electronic synth notes that marry with Doyle’s aching message repeated; “Hearts that never ever let you go”. It’s contemplative electronic music, but it also makes you want to get up and dance.

“Entirety” has a sharper edge and a euphoric feel. It’s another solely instrumental track from East India Youth. By contrast “Carousel” is grand and sweeping, filled with strings and vocals sounding something more akin to Rufus Wainwright than the modern electronic pop we are used to from East India Youth. Closing track “Montage Resolution” is made from ambient noise that builds and scatters in a beautiful way.

Indeed, the range in this release really is admirably broad. From euphoric electronic pop to introspective lyrical ballads; East India Youth has got it going on.