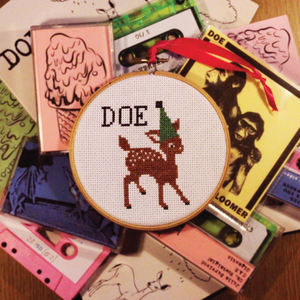 Legitimate indie rock, in the truest sense of it as a “genre” never really died, it just hibernated for a while. Bands like Les Savy Fav, Sleater-Kinney, and Modest Mouse arose in the late ‘90s where public interest had taken a dip, and they kept it alive to one degree or another, but the network of groups had dwindled. Now at the halfway mark of this decade, it’s great to see a band like Doe make a record that sounds like the type of release that even major labels were messing around with in the late ‘80s and early ‘90s.

The majors still don’t care, but in a day and age of Internet proliferation, it doesn’t matter anymore. Doe are an awesome band, and their record First Four, which compiles their first handful of EPs, is a fiery and limber rocker wherein every song sounds like your favorite until the next one starts. The band has a tightness that recalls the Breeders song from which they take their name, but subtracting the sugary vocals for something more strained and with a foreseeable objective. Not that this band doesn’t understand pop, as the Breeders always did. “Late Bloomer” effortless swirls the dueling guy/girl vocals of guitarist Nikola Leel and drummer Jake Popyura for something that sounds like it could have been on a That Dog or Juliana Hatfield Three record. Likewise for the bumping “Redo Improve” which takes the rough and tumble guitar and crafts into something that will make you sway back and forth in your chair. It’s also noteworthy to note that these youngsters are English, and do American indie better than most Statesiders right now (occasional long vowels from Nikola are the only indicators).

It’s amazing to think that only a year ago, detecting an early PJ Harvey influence in music was hard to come by, but now it seems like it’s everywhere from Mourn to Torres. Doe borrow from Polly Jean, but only in traces. “C.A.E.,” which is arguably the album’s best track doesn’t sound like a Rid of Me pull in its structure, so much as the desperation in Nikola Leel’s voice in its chorus, and the way she and Jake Popyura duet together like two lovers longing for the same thing, while singing at the opposing walls.

A perfect blend of anger and bouncy pep, First Four finds Doe taking an old set of clothes, washing them good and clean, and strutting the hell out of them. This album is lean and memorable, and is a most worthy continuation of the legacy of their indie rock forbearers.