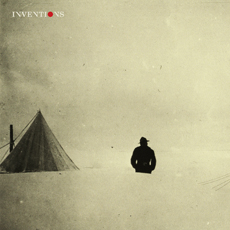 To call ‘Maze of Woods’ an album would be a half truth, it’s a collection of songs, but not in the sense of 3 minute pop occurrences produced to merely serve a purpose. The instrumental nature created by Inventions’ sophomore effort bestows a cinematic feel and something that conveys a soundtrack aesthetic to the 8 celestial flourishes. Inventions is the brainchild of Mark Smith from Explosions in the Sky and Matthew Cooper, known for his work with Eluvium. The duo are well versed in the elusive manner of ambient music and ‘Maze of Woods’ finds the pair immersing themselves in the ways of crafting different textures through abstract soundscapes. Its sound is a warm and hazy fog of static where you can imagine broad sweeping cinematography taking in rolling green hills, snow-capped mountains and spring sunlight piercing through lush forests. Although with ‘Maze of Woods’ traversing at a glacial pace, a feeling of noir is a recognisable undertone, with the record’s shadowy moments taking you on a moonlight drive down an abandoned highway, with the occasional headlight blemish disrupting the darkness.

Each track blends into another, with a constant stream of evolving sound; opening moment ‘Escapers’ adopts clipped beats, swelling surges of sound and sampled vocal snippets, with one poignant lyric cutting through “Be a limited struggling human being”, ensuring an organic soul can be found through the walls of ethereal mist. ‘Escapers’ is something of an anomaly as the rest of ‘Maze of Woods’ shifts into an almost intangible persona, nodding towards superfluities that are barely there. ‘Slow Breathing Circuit’ trembles with an otherworldly chime and ‘Moanmusic’ crackles with melodic drones that twinkle as they disperse. ‘Wolfkids’ manoeuvres the album back towards beats and expanding plumes of sound similar to ‘Escapers’. Closing track ‘Feeling The Sun Thru The Earth At Night’ forays into an almost evangelical stance, where murmured chanting wafts over heart-like thumps that are wrapped around droning tinges.
‘Maze of Woods’: A collection of songs to happily get lost.