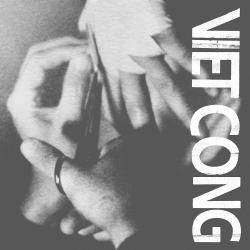 The death of Women guitarist Christopher Reimer was an unexpected close to the possibility of the band ever reforming. Aside from it being just a total tragedy that a talented guitar player would die so young, listeners would be left in limbo wondering if bassist and vocalist matt Flegel would ever get his footing again as Women were starting to get before their 2010 on-stage breakup. Prayers were answered when new band Viet Cong began playing shows all last year, the band consisting of Flegel, Women drummer Mike Wallace, Scott Munro, and Daniel Christiansen, the latter who once played in a Black Sabbath cover band with Flegel and Wallace.

Viet Cong aren’t so much the New Women, but more of an offshoot of the group that still carries their chalky form of post-punk, but with added experimental elements, such as keyboard drones, sound loops, and the occasional long, unfolding song structure. Their debut album, Viet Cong, is seven songs and keeps it interesting with varying tempos and attacks while all staying awash in the band’s crumpled, flame-beaten world. The name Viet Cong is a most fitting choice for the new group – these songs have an anxious, battle ready sound, like a troop ready for ambush, but also just as ready to go on a suicide emission. Lyrics stream with a need for fighting, all without full certainty as to why – “What side are you on, man” asks Flegel on “Bunker Buster.” “I think we look the same/I know eventually you’ll tell me where you came from.” Their sound isn’t cocky at all – Flegel’s voice is failingly urgent and scared sounding, like Paul Banks after being awake for five days straight – but their sound is powerful and sure of itself, throughout the record.

Their most popular song thus far is “Continental Shelf” which boasts an Echo and the Bunnymen-style hook over a post-hardcore breakdown. On it, Flegel can hardly contain his composure, hollering “Don’t want to face the world/It’s suffocating/Undesirable circumstances/I can’t feel.”  The track is certainly the most accessible but this isn’t an album that should be too hard to sink one’s teeth into if you’re not all about the artier side of post-punk. It has “Silhouettes” as well, which is an uptempo body mover in the vein of Bloc Party or Interpol’s “Roland,” albeit covered in cinder and ashes. If you are however into something a bit more brainy, you’re in luck! The album’s centerpiece is a six-minute proggy piece called “March of Progress” which sprawls at first with rumbling and drone tone. The song then gets adorned with fluttery picking (synth harp, perhaps?) before finally taking off in the last two minutes. The album’s closer, “Death” is a jangle rock opus, starting innocently enough before giving way to heavy stomps and a pounding conclusion over 11 minutes.

Viet Cong isn’t the most immediate record, but it’s certainly effective in its ashy power. The songs pound and pummel along as Flegel’s shaky voice guides you through the violent tour. While not quite as fresh sounding as Women’s Public Strain, its war drumming apocalypse is an interesting turn, and may prove to be a more rewarding record in the long run.