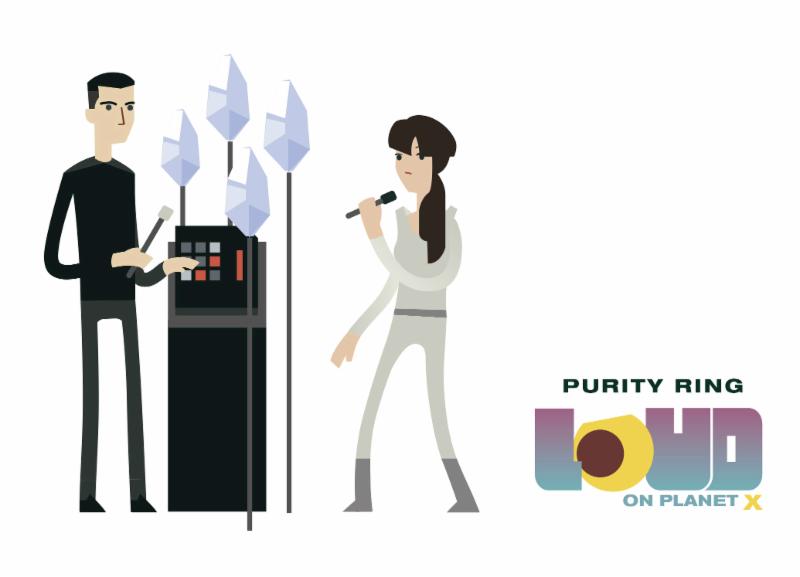 Toronto based studio Pop Sandbox announced the addition of Purity Ring to the list of top musicians featured in their upcoming indie video game, ‘LOUD on Planet X’, joining Tegan and Sara, Metric, F*cked Up, METZ, Austra, Lights, July Talk, and Cadence Weapon. In addition, they have offered up a sample of the second score to the game from Brendan Canning & Justin Peroff of Broken Social Scene – stream via Soundcloud – along with details on the limited edition 7″ vinyl, with original artwork by indie comics superstar Michael DeForge, available only to ‘LOUD on Planet X’ Kickstarter supporters – campaign ends June 5!

Targeted for a Fall 2015 release, ‘LOUD on Planet X’, will be availablefor console and mobile. Combining rhythm tap and tower defense style gaming, ‘LOUD on Planet X’ allows you to use an assortment of power-ups (amps/strobe lights/fog machines/bouncers/etc.) to help your artist defend their stage, against hordes of attacking aliens, as you tap along to the music.

Pop Sandbox is an award-winning small studio based in Toronto, Canada. Pop Sandbox brings together top practitioners from a variety of backgrounds and disciplines into a creative environment that fosters innovation in both content and form. Over the past 5 years, they have worked with a diverse group of filmmakers, artists, journalists, social workers, technologists, playwrights, animators, composers, game designers, activists and musicians on groundbreaking graphic novel, film, videogame and interactive experiences.