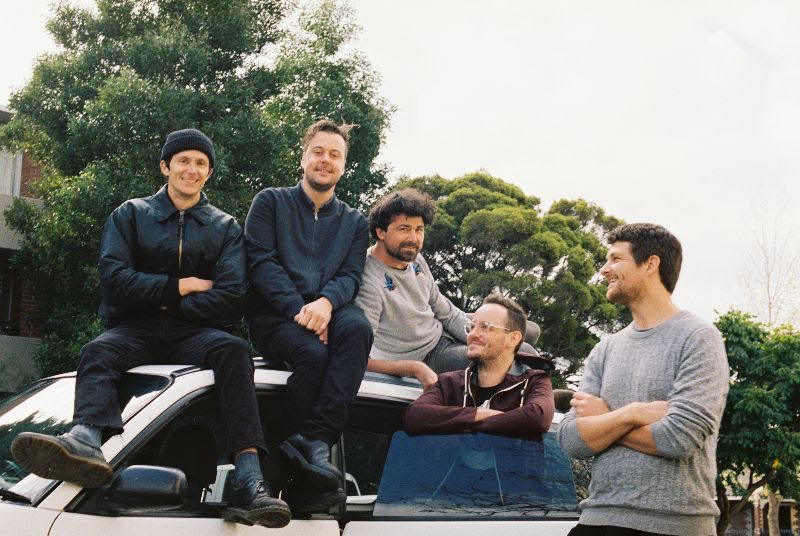 Possible Humans Adam Hewitt on “Lung of the City:”

“Lung of the City,” is the album’s leadoff track, and brings the bands driving rhythms and melodic guitars into full focus. “Resenting a home town is lazy and leaving it doesn’t make you cool, however correct. It’s a relationship worth understanding, because maybe it doesn’t want to see you either.”

Possible Humans formed in 2012 as a loose amalgamation of some solo projects, existing mostly by way of reckless and ambitionless improv jams in Melbourne’s most notorious third-rate rehearsal space (now defunct) after hours on the roast in the All Nations Hotel, the unassuming pub at the other end of the street. The group was initially four: Leon Cranswick and Hewitt brothers Steve, Mark and Adam. Both pub and dungeon proved increasingly difficult to escape, especially once Adam’s longtime partner in crime Samuel Tapper started showing up to fan the flames.

Demos of actual songs soon circulated, with all members contributing. The earliest recorded result was a 7″ made on 8 track reel-to-reel and cassette at the old Kensington Wool Sheds and released by Sydney pal Sam Wilkinson on his Strange Pursuits label. ‘Cuz’ and its flip ‘Toroid’ were written by Mark and Steve respectively, though lines of authorship in the group were blurring.

The improvised tape Ringwood/Ozone followed, released as spontaneously as it was played. Of all its preposterous details the most ironic is that Steve, the band’s ‘spiritual leader’ and original creative force, did not play on it. Did not even turn up that night. Which was an interesting twist to the band’s new Stooges-like communism. No one, least of all PH members, can tell who was playing what on it. Instrument-swapping was rife in the early days but now Mark usually drums, Sam and Steve do most of the singing, and Adam and Leon do everything. Influences have probably always included Guided By Voices, Neil Young and Wire.

A lot of the songs on Everybody Split were first recorded – or demoed, in hindsight – at Sound Recordings, Alex Bennett’s splendid all-analogue studio in Castlemaine. But the songs needed more time, and the tunes hit their stride some years later alongside new ones with Alex Macfarlane at the helm, whose DIY approach to recording did the trick. Macfarlane, a longtime fan of the band, released the debut LP on his own Hobbies Galore imprint and it sold out in a day.

The lyrical content of Everybody Split touches (among other things) paranoia (‘Nomenclature Airspace’), the comedies of insect social media use (‘Stinger’), freedom and other existential complications (‘Absent Swimmer’), sympathetic galloping (‘The Thumps’), the acceptance of relative motion (‘Lung of the City’), leaving the funpark after ‘too many goes on the gravitron’ (‘Orbiting Luigi’), and, as Steve puts it, ‘the whimpering man in the strong dog and vice versa… sarcasm and paradox at the roots of depression’ (‘Aspiring to Be a Bloke’). The record culminates in an epidural baby’s saga of enlightenment (‘Born Stoned’), and a song about a girl and the end of an era (‘Meredith’).

courtesy of Trouble in Mind