The Simple Joys of Phantastic Ferniture 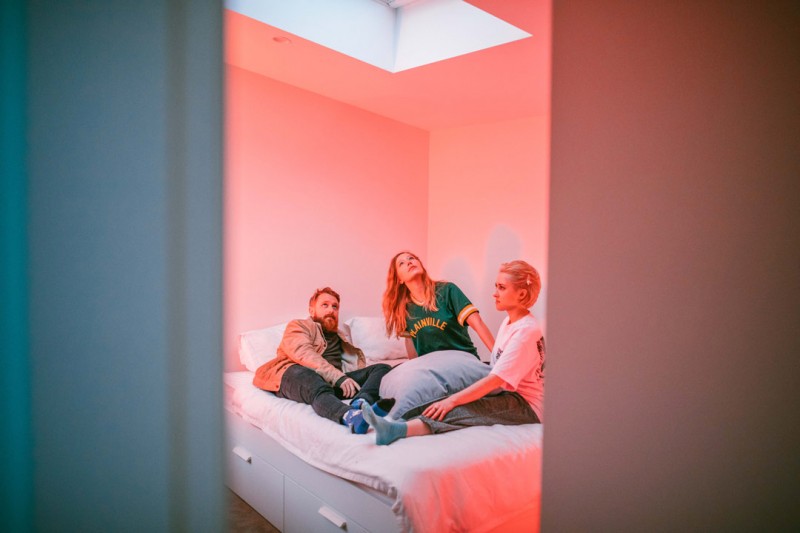 Few acts have quite the trajectory that Australia’s Phantastic Ferniture can boast. After joining forces over the years at home in Australia, Julia Jacklin, Liz Hughes and Ryan K. Brennan slowly built up a loyal fan base for their seasonal band. Jacklin’s solo effort quickly gained a lot of success, but in a bid for something more fun and simple, she returned to her friends to make some indie pop with depth on their self-titled debut. We caught up with Phantastic Ferniture ahead of a string of Australian dates to discuss their new shape and what the future holds for them.

Northern Transmissions: Considering you had all been up to music in the last few years, what led you all to work together on this new project?

Julia Jacklin:  Well really we’ve been playing in this band for over 4 years. It started before any of us were seriously working on our solo work. It was all very relaxed at the start, just a reaction to the pressure we felt in our work. There always feels like there are these steps you have to take in music if you want to achieve ‘success’. With this project we didn’t want to bother with those we just wanted to be spontaneous and play shows when we could.

Liz Hughes: We started this project because we wanted to do something musical that we didn’t take seriously. Performing and baring your feelings through songwriting is inherently nerve wracking for most people.We wanted to start a project that wasn’t really a representation of ourselves as individual personalities. To me that’s what a band is – people coming together to create something that can only be created as a collective. It takes the pressure off.

NT: I also heard the whole ideas started in pizzeria basement with 10 people wanting to form a band, so what did this 10 person group almost look like and who else was almost in the group?

JJ: Don’t think any of us remember who exactly was in that circle. There was a lot of alcohol involved. Probably some strangers on their way to bathroom made it in.

LH: It looked like a bunch of drunk 20 somethings getting carried away with an idea in an excited “Let’s actually do this!” kind of way, with zero expectation of it becoming real. I think we quickly realized that an indie rock band only needs so many instrumentalists and out of those 10 people, 9 or so were guitarists. I’m fairly sure there was a banjo player at that point, and perhaps a slide guitarist too. We also realized pretty quickly that banjo isn’t the most indie-rock compatible instrument.

NT: I was also interested to hear that Julia was tired of playing sad music, so what broke you from that and what has it been like seeing people react to this new music live?

JJ: I love sad music and I think we all do, as a group we all tend to lean towards melancholy in our solo work but it’s nice to be able to play in a group where the goal is more to just make the audience have fun and forget about their troubles. Instead of reminding them. I think that’s been a huge part of why we’ve kept going, just playing for people who look really happy. It’s not always a given.

LH: I don’t think we will ever tire from playing sad music. There’s something so heartbreakingly beautiful about revelling in melancholia through music. It’s such a timeless feeling, and it does make you feel youthful – that sense of wonder and drama and beauty and sadness that comes with first love, first heartbreak, first sadness, first experiences of joy being so closely linked with melancholia. Music is a way of reliving those significant moments in our lives. The joy we see in our audiences at Phantastic Ferniture shows is a different kind of joy. It doesn’t feel overly complex – it’s just this knee-jerk reaction to the sound – it makes people smile and want to jump around. It feels uncorrupted – simple and pure.

NT: On this note, you actually decided to ditch your go-to instruments on this project, so what prompted that change and were there any unexpected side-effects?

JJ: It wasn’t that we ditched them completely more just took a different role in a band than we had before. Ryan had never played drums in a band and Tom was usually a lead singer/guitarist or a drummer but he took on bass. I have always sung but I’ve never been a lead singer in a band without playing an instrument. Playing that role is so different than just being able to hide behind a guitar. I think for me it gave me a whole lot of confidence on stage because I realized if I don’t have fun on there, the audience won’t. You put on a crap show if you worry too much about embarrassing yourself.

LH: Well, we were all guitarists so we had no choice. One of us had to play drums and someone had to play bass. I didn’t really fancy myself a lead guitarist but I had to take on that role, and I really wanted to. It’s such a different experience not being the front person in a band and I love it. I think we also liked the idea of playing different instruments because it took the pressure off. Throwing yourself in the deep end leaves little room for self criticism. If you’re just trying to stay afloat you’re relying on your instincts, and I think Phantastic Ferniture was a bit like this for us. We had no time or space to critique ourselves because at the beginning, we were up on stage just trying to keep up with the tunes and get through each song in one piece.

NT: How else did your “Don’t over-think things” ethos affect the writing and making of the record?

LH: As we’ve always had a lot of other things going on in our lives, we haven’t really had the capacity to do anything but not overthink it. A lot of the components of Phan Fern are quite last minute and thrown together right down to our songwriting, shows, videos and photo shoots. Julia and I bought our costumes for the Fuckin N Rollin clip 3 hours before the shoot from the men’s section in Kmart. I remember I was super broke from recording my first solo album and could only afford to buy something that was around the $10-$15 mark. We rocked up to the shoot with no plan but to “sing and dance in front of the camera”.

JJ: I think it just took the pressure off us to try and achieve perfection. We didn’t ever really question if a song fit our style, we’re still not even sure what our style is to be honest! We just trusted our gut every step of the way in the creative process and now it almost feels like we can listen to the record as fans. We can’t even remember a lot of the things we put on there almost.

NT: Why did you decide to form Makeout Records for this album and do you have additional plans for the label?

LH: I think it was more of a question of “Why not?”. We were in the position where it was possible and we had the support we needed to get it off the ground. It means we call the shots on everything we do in Australia and that’s a really cool thing and fits with the ethos of the band.  I’m really proud of the music community I’m a part of and I really want to foster it and participate in as many ways as possible and a label seems like a great way to do this.

NT: Now that you’re actually touring Phantastic Ferniture more, how are you looking to balance all the projects you have?

LH: It’s always a balancing act. We just fit everything in where we can. Julia and Ryan are two of the most hardworking people I know.

NT: With you taking some time away from other projects and this taking priority, what does the rest of the year look like for Phantastic Ferniture and what’s your biggest goal for now?

JJ: I think we’re just going to tour the record in Australia and make sure we put on some really great shows. We haven’t played since before Christmas last year so we’re just really excited to play again.

LH: Yeah I think we will tour the album and then just enjoy the feeling of having finally released the record! Julia and I both have solo records to release and we are pretty keen to get those out into the world at some point so that will be a focus too.