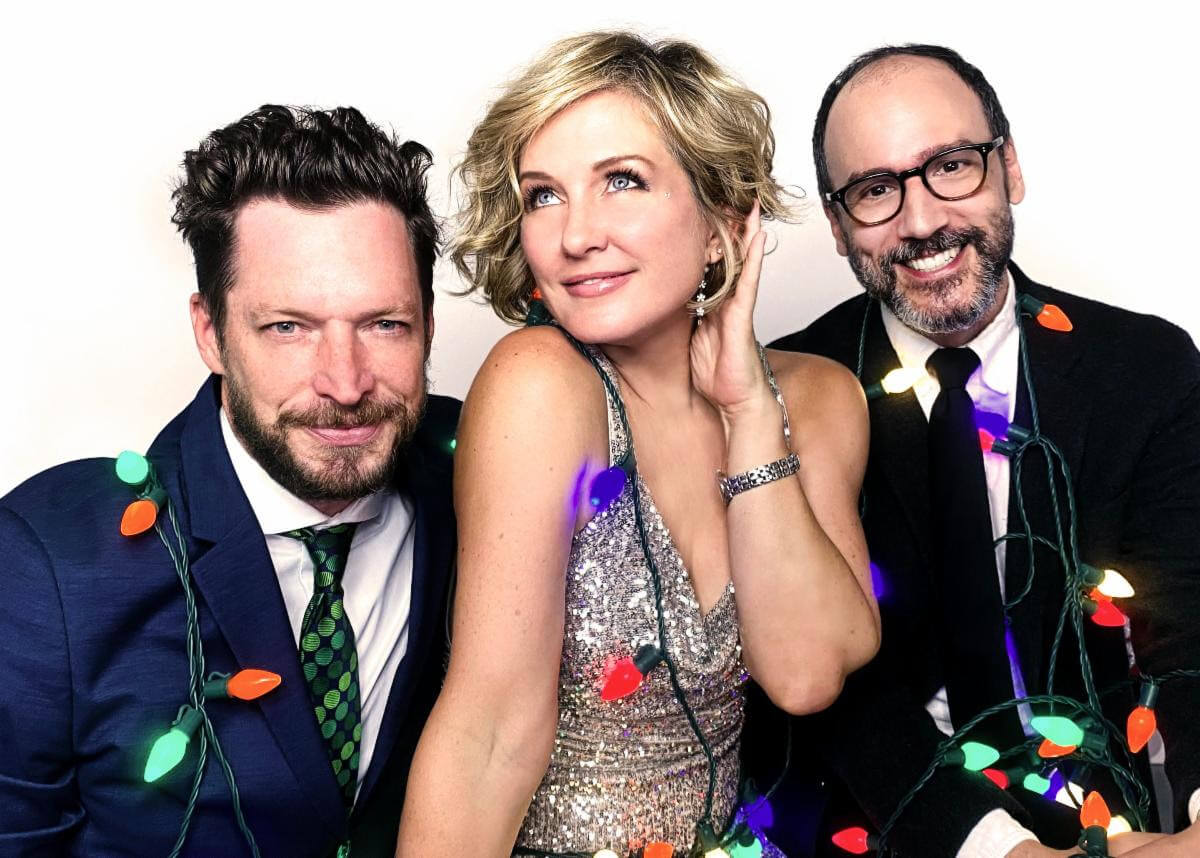 I haven’t been on the phone for even a minute with Syd Butler when he comments that as someone from Vancouver I should probably know more about hockey. The charismatic and, quite funny bass player of Les Say Fav and member of the Late Night With Seth Myers 8G Band then proceeds to school me about the Canucks recent acquisition of Washington Capitals goalie Braden Holtby. “This is a hockey house and The Capitals are my team”, Butler says with a chuckle before his wife, actress, singer, songwriter and the also very charismatic and funny, Amy Carlson yells over the proceedings that “Adam, If you could see me now, I am hitting my husband over the head to make him stop this” to which Butler responds, “But I’m just trying to catch him up on what’s happening in Vancouver” to which Carlson responds, “Syd, he doesn’t care.”

This continues for the absolutely delightful thirty minutes I have been granted to speak with the couple and as hectic as this may seem for a Tuesday morning at 8 am, I was so happy to soak up every minute of it. In fact, it was akin to being at a family gathering and listening to your extended family playfully tease and banter with each other. Now, with everything that is happening with the pandemic right now, this is something many people aren’t going to be able to experience but through Butler and Carlson’s musical project, Office Romance, you’ll be able to get the kind of warm fuzzies typically reserved for a more normal holiday season. The band has just released Holidays Of Love, a ten track album made up of all original holiday material and even though things seem pretty bleak at the moment, it is sure to pump some of that holiday spirit straight into your heart. The project also features Butler’s Les Savy Fav and 8G bandmate Seth Jabour as well such friends and musical luminaries like Matt Hitt, (Drowners), Fraser Campbell (multi-hyphenate musician and composer), Britta Phillips (Luna, Dean & Britta) and Kia Warren/Liza Colby (SUSU Band) PLUS there are even contributions from all of the Carlson/Butler and Jobour children as well, making this a real family affair. It may seem like an uphill battle to try and write an album that can hold up to some of the classic and contemporary holiday hits, from Elvis and Boney M to Vince Guaraldi and Mariah Carey, but Office Romance tackle the project with an aplomb and style that works its magic in the most wonderful way.

Holidays Of Love was, in part, directly inspired by Butler and Jabour’s stint as members of the 8G Band and the fact that they have been coming up with original music now, almost daily, for the past six plus years. “Having to write original songs every day for the show, really gave us the confidence to trust our instincts,” Butler explains. “From doing this we’ve been able to sort of take the mystery and anxiety out of songwriting and feel more confident about trying other things. We have tended to become less precious about it all and it’s good to be in a more freeing place with it. With Holiday Music you have to have a certain sort of structure. So that also gives you a little bit of a path. Seth and I have been writing together for so long and it’s just like how you can kind of sit down and come up with something that sounds like Sonic Youth or the Pixies but, in this case, it’s a holiday song.” The record was recorded in quite a unique manner as well with all the music tracked last summer long before there were even lyrics. “We recorded all the music over three days,” Butler says. “The initial idea was to just record three songs but it was so much fun to be in the studio with everyone that we decided we wanted to switch the focus on that first day to writing with everyone.” “They were just shitting out ideas,” Carlson says laughing. “All they do is write songs and we ended up with so many song ideas that day and we gathered up a handful that we really loved and ran with them.” With the tracking finished and both Carlson and Butler’s other projects piling up, as well as family duties, it wasn’t until the pandemic hit North America and lockdown happened when they were able to focus on finishing the album. It was up to Carlson to write all they lyrics on the record and she was very much up for the challenge as she is an absolute Holiday Music fanatic.

“I’ve always loved Christmas songs,” she explains. “Growing up and still now, every year, I’m always like ‘let’s get going with Christmas music’ already. My parents had these compilation records that I was obsessed with growing up. There was Maurice Chevalier and these ones that we would get from Firestone Tires. These classic sounding songs with amazing vocalists. Those songs were just in my bones but when I was starting to write what I love about the holidays, it was a little intimidating. There were some days where I just had zilch and I had to write ten songs! Somehow it got done. I mentioned some of my frustration to the SUSU band members and they said something that made things a little more clear to me and that was that there are a million songs about being in love, so if all these people can find different ways to express the same emotion, then I should be able to do that same thing but about the holidays. I remember when I had finished (album opener) “Magic in The Air” I went out for a walk after being up all night working on it and I was so exhausted but so happy and it all kind of just came through from there.” After the song’s lyrics were wrapped, a new set of challenges came up. How was the band supposed to be able to record all these new vocal parts, with the guest singers they wanted, who were also in their own quarantines? “It was a bit of a tedious process with having people record their vocals at home and then send them to us and then us sending notes and back and forth and so on,” explains Carlson, “and I was worried that people wouldn’t be into it but everyone was so great. We had Matt Hitt (of indie rock act Drowners) sing on a couple songs and I was giving him lyrics and sending him scratch vocals and it was so tedious that I thought he would just be bored to tears but that guy is the coolest and there was no ego there at all.” “Matt is a real cool guy,” Butler emphasizes, “Cheeky. Model. Leather Jacket. Cool Dude.

We had these songs and I thought that he would just be perfect for him and it was a bit of a shock to us how excited he was about to sing these.” Then there was the time that Butler and Carlson were able to get some time at a studio on Martha’s Vineyard to record her own vocals for “Magic In The Air”. “I was really wanting to sing this song,” says Carlson. “I just got the feel of it. It was The Go Gos. Belinda Carlisle. I really wanted to go for it. We managed to get some time in a studio in Martha’s Vineyard. With the safety protocols in place, the engineers were all in the control room and we couldn’t go back and forth and also we couldn’t turn the air conditioning on, so we are in the studio with our kids, trying to get everyone to be cheerful and we are all just sweating because it’s like 105 degrees. The kids were swearing at me,” she says laughing.

With how many hurdles Butler and Carlson seemingly had to jump through to get the record done, they truly did it right. Even myself, not a genuine Christmas fan and with all that is happening in the world, someone that wasn’t overjoyed about the possibility of listening to a holiday record but I found myself shocked and surprised by how much Holidays Of Love affected me. Clearly there is a lot happening around the world that most days you just want or need to tune out to save your sanity but besides all that, this is an extremely well crafted record that taps into the feelings of connection that the holidays bring us. It’s the time of year where you are able to see and celebrate the love you have for your friends and family. It takes you back to simpler times and teases the excitement of what the new year may bring. We are all just living day to day lately and while walking around the neighbourhood listening to the album, I remembered what those things felt like and it was really nice to be able to feel something positive again. These feelings are aptly summed up by Butler when discussing the instrumental “Flurry” that appears at the album’s midway point. The song was written and performed by the couple’s 12 year old daughter and as he explains seeing her excitement about playing music and learning about music and being playful about music without being at all jaded is something that Office Romance was hoping to achieve with this album. “You sometimes lose sight of being playful as you get older but because of our jobs and with this record we are able to retain those feelings more and more lately.” I think that when you sit down, whether it is with your loved ones in person or over Zoom this holiday season and listen to Holidays Of Love, I guarantee you’ll feel, even If it’s only for a moment, exactly the same.