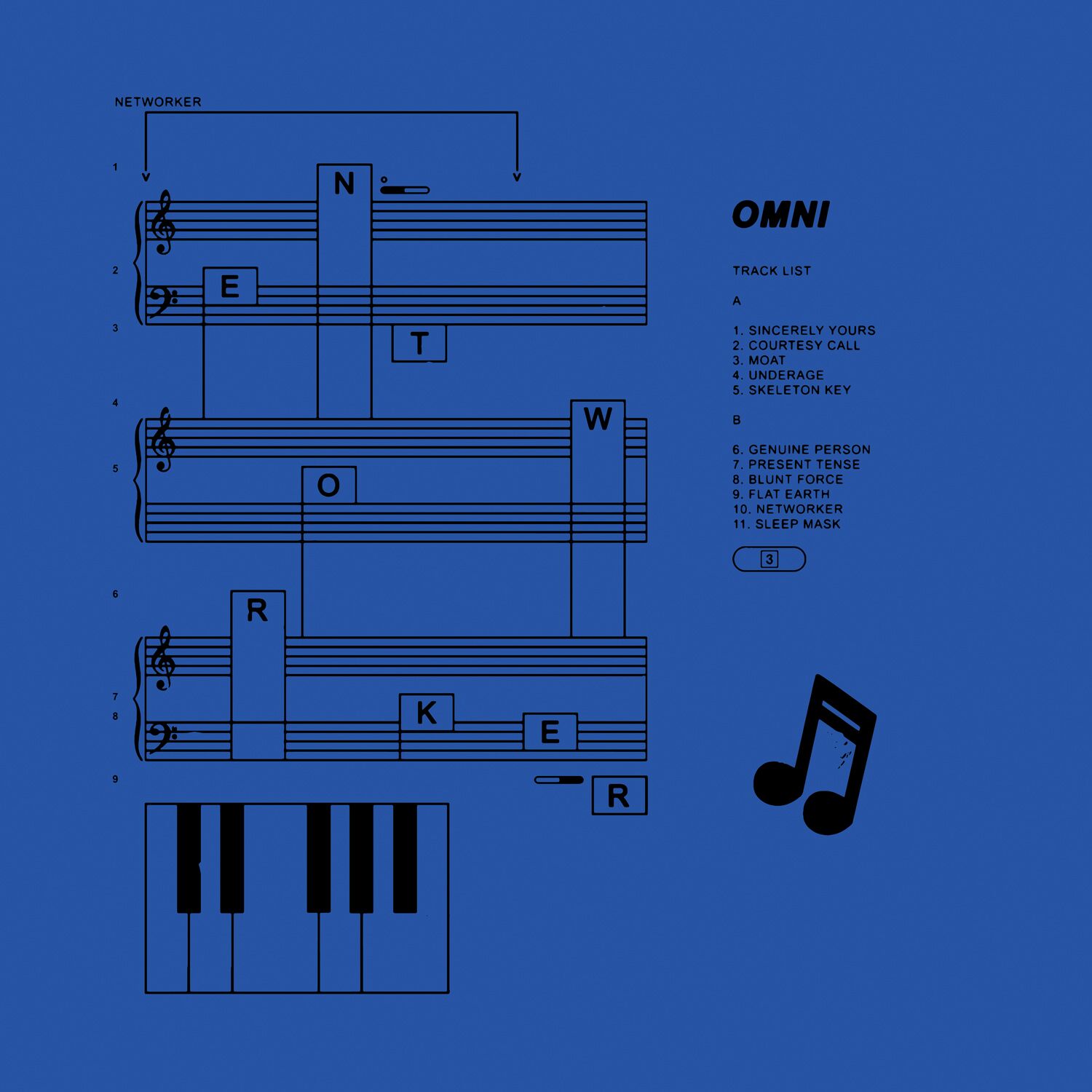 We’ve come to the point in the circular narrative of music where many bands are embracing the sounds of the 90s and 00s and tackling these with a contemporary spin. It’s not something that is necessarily planned out but just artists who grew up in these decades taking cues from songs they grew up with and making it their own. Omni seems to exist outside this era of inspiration. The Atlanta based trio seem to be mining the 70s and 80s post punk worlds and updating those, slightly, with a more modern and more subdued indie take. It’s strangely refreshing to hear the songs that make up their third, and first for Sub Pop, album Networker, hark back to the more angular and minimal days of those eras comparatively to the more overwrought and, frankly, over indulged eras of the other previous two decades.

Networker kicks off with “Sincerely Yours”, with a bouncing bass line and Wire-esque guitar riffing before the drums kick in, rather subsided, holding time with their clenched hi hats. The production and mix on the album immediately stand out. All the parts exist in their own space, never intruding in on each other but always working together in their deceptive simplicity to create something much larger than their sum. The vocals sit perfectly in with the music projecting just slightly above a soft monotone. Yes, it could be labeled as a throwback but Omni keeps everything super fresh and modern sounding even when they are wearing their older influences so plainly. “Courtesy Call” has a sinister Gang Of Four type of swagger to it with its constant stream of starting and stopping. “Moat” steps things up tempo wise but still keeps the albums clean, sophisticated minimalism going. So much in fact that the addition of a simple shaker part stands out so much amongst everything else that is going on. You really get the sense that there is absolutely no fat on this album at all. Every sound you hear is one that Omni made sure is apparent in each of the albums songs.

Produced by the band, Philip Frobos on bass/vocals and Frankie Broyles on guitars/drums/keys, and their longtime collaborator Nathaniel Higgins, over the course of a few sessions earlier this year, Networker is cleaner than the bands previously produced outings which lends a nice airy element to the proceedings. “Underage” still has those post punky elements that make the other tracks so outstanding, such as those angular, stabbing guitar lines, but rhythmically the track moves at a boppier pace, feeling almost like something out of the sixties, complete with a simple, hooky synth part. “Genuine Person” has a Devo-esque dueling guitar part that is an instant ear worm and a nice languid pace that is carried almost entirely by the vocal melody. It’s actually really nice to hear how much of the albums tracks are in fact carried by the singing instead of most bands insistence on having the pace determined by a non stop barrage of drumming. The drumming all the way through Networker is minimal and refreshingly thoughtful. The under two minute “Blunt Force” has a surprising jazzy feel that makes it stand out amongst the rest of the albums tracks while still retaining the overall aesthetic of the record. Album namesake and highlight “Networker” opens things up a bit with a more lush arrangement full of synths and a remarkably hooky and lush vocal melody that bursts open the song during the chorus. “Sleep Mask” brings the record around full circle to the start with some stellar drumming amongst the requisite stop/start rhythms of the guitars and a sly little bass line that plays around in the space between it all.

“Networker” may seem on its surface like a throwback to the past but Omni doesn’t seem content to just throw up old ideas instead infuses a freshness to styles that have come before. This isn’t a band mimicking a style, they way they approach these songs musically and the way they play them together suggests the work of a group of people who are super capable at what they do and have a clear idea on how to do it. While they reference sounds and styles from the 70s and 80s if we were to compare this to another record it would have to be the classic album Grab That Gun by The Organ from 2004. This was a band that took the “post punk” aesthetic of the past and made it their own thing. Case in point with Omni and Networker, it may look to the past but the past does in no way dictate to it at all. It’s a fresh and often exhilarating collection of songs by a band that is startlingly proficient.