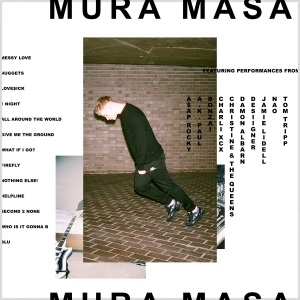 Not many people are already producing music at 15, but by the sound of the new record from Alexander Crossan (aka Mura Masa), starting early pays off. Pulling in artists like Bonzai, Desiigner, A$ap Rocky, Charli XCX and even Damon Albarn, Crossan knows how to get the best out of his collaborators. On an album equal parts pop and experimental, Crossan makes something both accessible and intriguing all at the same time.

Opening on the clang-filled “Messy Love” he blends the worlds of electro-pop and ambient indie beautifully. Throwing a wash of sounds over a driving beat and sublime vocal delivery, his starting track sets the stage well for cross-genre magic. Coming in dirty on the gritty bass of “Nuggets,” all driven forward by the forceful vocals of Bonzai. Adding a dance-ready beat and funky syncopation, the track is a party track with depth.

“Love$ick” rips out on a piercing drum-track, before A$ap Rocky’s sad story gives another layer to the track. The quirky distorted vocal track that floats above the steel drums also adds its own emotional pull to the track that carries more emotional weight than many vocal tracks like it in pop. With her signature brash attack, Charli XCX leads the charge with a note of regret on “1 Night.” The mix of a sombre pop track with something more club-inspired in its flow leads to a track that works for every mood thanks to some catchy hooks.

Desiigner’s weird sounds, and surprisingly stripped back vocals on “All Around The World” lend a vulnerable new layer to his sound. While the remaining sections of the track feel all too straightforward and done, the production is impressive nonetheless. “Give Me The Ground” provides a small, rustic interlude, with creatively auto-tuned vocals to add more density to the sound.

“What If I Go” brings Bonzai’s sublime vocals back on a track that goes from sparse upbeat pop to an absolute party in one heavy moment. The pounding beat and sense of pure joy lifts the already euphoric track to something all the more invigorating. Once again a little too generic, “Firefly” still has some truly gripping moments in its builds thanks to NAO’s vocals.

Jamie Lidell’s vocals on “Nothing Else” along with the preppy instrumentation is hard to describe as anything less than sexy. The mix’s very attacking attitude along with its intense dance groove comes together for something that sounds like the best collaboration Bruno Mars and Justin Timberlake never made. Rolling its bass relentlessly “Helpline” has a distinct rush to its mood. The energetic choruses, layered with endless samples makes for a buffet for the ears.

Going a lot more barebones “Second 2 None” is a much darker and brooding track than most of the record. Thanks to the passionate vocals from Christine and the Queens takes the already stirring sound and makes something deeply personal out of the track. “Who Is It Gonna B” once again brings in more ambient tones with its constant build. Although sonically fun to listen to, its final release just doesn’t land quite right. Bringing in Damon Albarn for “Blu” the two producers share beautiful duet over the most simple yet effective tracks of the record. The result is one of the most enchanting tracks on the album in its basic bliss.