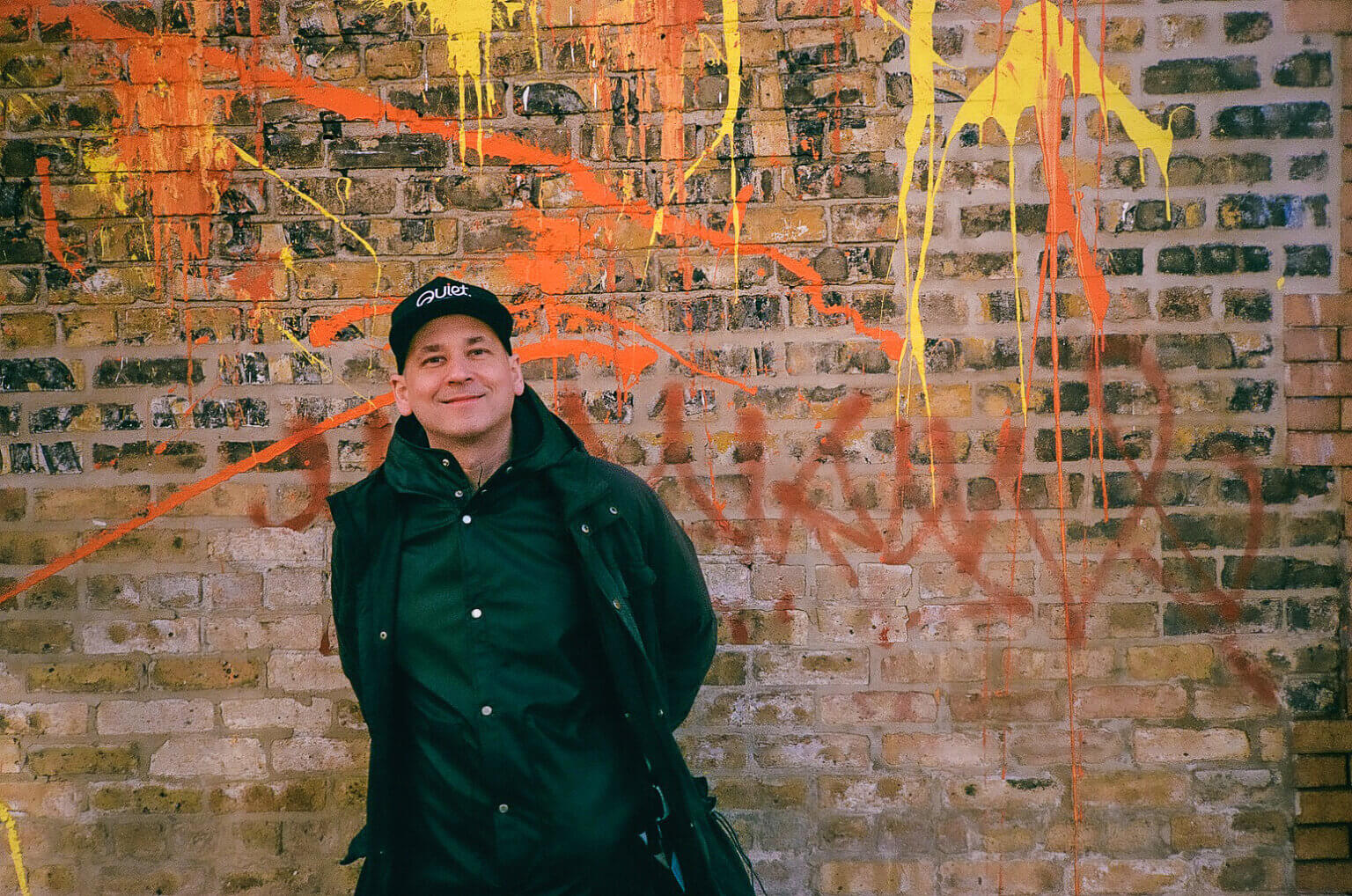 Depending on how you look at it, there are either 21 years or a matter of days resting between Chicago lo-fi project Love of Everything’s latest releases. Last week, Bobby Burg uploaded Lived in Chicago, 1999— a recording of the band’s debut performance at the city’s legendary Fireside Bowl— to Bandcamp. He also released a super limited, 25-cassette pressing of the concert through his aptly-named Record Label. Today, as the launch title to Joyful Noise’s new Gray Area cassette series, Burg is issuing a more recent run of tunes called Echo Frenz. In fact, it’s the first proper release from Love of Everything in close to a decade.

Part of the gap, of course, could be due to Burg’s prolific run as a member of iconic experimentalists Joan of Arc, whom issued their final LP, Tim Theo Melina Bobby, last December. Like Joan of Arc, Love of Everything has seen several musicians enter its sphere, but the socially distant times of the ongoing pandemic means Echo Frenz is full-on solo Burg. Throughout, he adorns his cherubic, shushed vocals in acoustic guitar and Casio-manipulated tones. Take “Total Life,” where the organic string work is contorted and refracted into an almost overwhelming rainbow slipstream of sound. Elsewhere, looped organ patches and retro drum machine patterns set the punchy tone for “Own Best Friend,” a Dayquil-cheery electro-pop ode to solo music-making that, eerily enough, conjures these COVID times through iso-minded lines about “never leaving the house again.”

Caught shortly after hitting the post office to send out some mail-order items, Burg got into the return of his Love of Everything, Deep Fake tech, and a leftfield duet with Glenn Danzig.

Northern Transmissions: In addition to the new Echo Frenz tape, you’ve also just released the audio from the first ever Love of Everything show back in 1999.

Bobby Burg: Right, I made a tape! I actually sold out of the pre-order. I can’t believe that 25 people bought them; I was totally shocked. I thought I was going to have them for a few years. It was something no one wanted that I wanted to make for fun.

NT: Having it timed so close to the release of the new tape, was there naturally a lot of comparing/contrasting going on, thinking back to that first show and how the project has changed in the decades since?

B: For sure. Because a lot of the Love of Everything stuff isn’t on streaming services, I thought could tell a story by comparing the releases.

NT: What do you remember most about playing that first show?

B: I remember we borrowed Tim Kinsella’s Fender Twin amp. I used it, and Matt Clark, the other member of Love of Everything [at the time] — and also a Joan of Arc member—stood on top of the amp while we were onstage.

NT: Obviously you went on to have this long collaborative relationship with Tim as a member of Joan of Arc, but had you been friendly with him on a personal level at that point in your musical career?

NT: Why has it been so long between Love of Everything releases? Why did you pick it back up again?

B: Well, Joan of Arc had ended, so it seemed like a good idea. And it’s the only band I can do safely right now! I’ve always been doing Love of Everything in the in-between times; I just don’t always put everything out. This batch of tunes was “lockdown tunes”. I just made them in the last two months leading up to [the final Joan of Arc album]. I had the goal of finishing them by the release date of Tim Melina Theo Bobby.

NT: As you’d mentioned, this is something you’d been working on through the pandemic. With a song like “Own Best Friends,” I’m wondering if you can get into some of the ideas presented in the song, these lines about “never leaving the house again” and wondering where all the “other echoes” have gone.

B: It’s really just a song about being in a band with yourself. That’s what Love of Everything has been for me all along. What I was trying to get at earlier was that it was easy for me, mentally, to transfer [back into this project]. It was more that I got Love of Everything back than that I lost Joan of Arc.

NT: Were you experimenting with any new sounds on the album?

B: This is classic Love of Everything instrumentation, though the drum machine this time is the Roland TR-08, which is like a fake 808. I’ve always used a Casio SK-1 in Love of Everything, and I used it a lot in Joan of Arc, sampling other members as we were playing. What I did was that I limited the SK-1 to sampling the acoustic guitar.

NT: What can you say about “Misery Tomb”? The press release for Echo Frenz mentions that there’s an “uncredited” Glenn Danzig backing vocal on there. I don’t know if I’m projecting, but there is this deep, almost triumphant, Misfits-style “whoa…” buried in the mix.

B: I made another mix that I couldn’t put on Echo Frenz. There’s a Samhain song called “Misery Tomb” that this is kind of a cover of, but [the Samhain] song is just him howling. I thought of this as a cover of an instrumental song, but with words. Basically I wanted him to do it, but I couldn’t really [sample the original]. He’d get mad, or something.

Actually, let me see if I have this…So, I sent you the link to the Samhain song. Cue it to one minute in and then, in another player, cue up my song. When you hear me say “not going mental,” unpause the Samhain song. It’ll sync up.

NT: Can we get into “Daily Face Off”? Actually, first off, when was the last time—if ever— you saw Face/Off, the action movie?

NT: So, you know, the basic premise of the movie is that they [Nicolas Cage and John Travolta] swap faces, but do you remember that there’s also this sick anchor fight in it—like, swinging an anchor on a moving speedboat. Honestly, it’s worth a revisit for that alone.

B: I’m going to watch it tonight. I mean, you can’t have a song called [“Daily Face Off”] and not be familiar with the movie. It’s just rich with content. This anchor fight? I need to experience this again.

NT: How about just the idea of swapping faces as it relates to “Daily Face Off,” then? There’s this image you conjure of blading off someone’s face and wearing it, but not feeling sure about how that actually changes things in the long term.

B: It’s like, you can do whatever you want, but [overall] you’re probably going to be the same.

NT: Have you ever fooled around with Deep Fake technology?

B: Yes, a little bit. I was just messing with it this morning—you know, the app that came out where it brings old photos to life. It gives them subtle facial gestures, like blinks.

NT: What old photo were you testing that with?

B: It was a group shot of my brother, my sister and I. It chose to only work with my face, though, and it was so small in the photo that it just looked pretty abstract.

NT: If it had animated your siblings’ faces— their mouths for instance— would you have tried to have a conversation with them, like, vicariously through the photo?

NT: Have you been in touch with your family throughout the pandemic?

NT: So you have this new Echo Frenz limited tape coming off the heels of another limited tape. Is there even more Love of Everything on the horizon?

B: Yes, for sure. I have something other releases in the works that I’m going to put out on Record Label; some old stuff and some new stuff.

NT: Joan of Arc may have wrapped last year, but have you been putting any more work into the Aitis Band with Melina and Theo? Is there an Aitis Band III?

B: Ray Borchers from Aitis Band painted the Echo Frenz cover! She was making the cover painting upstairs while I was recording down in the basement. We’re going to re-issue Aitis Band I and II on cassette; Aitis Band III has been tracked and is currently being produced/mixed by Nate Kinsella.