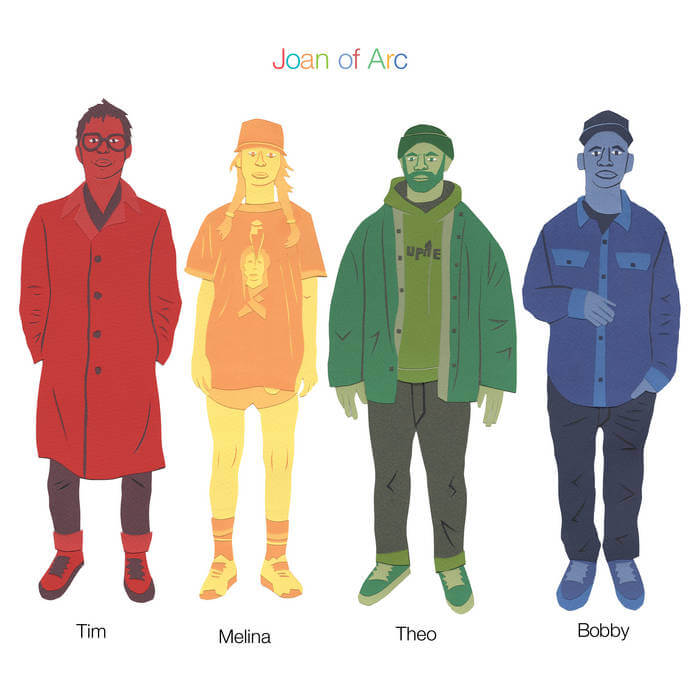 In the closing moments of Joan of Arc’s “Upside Down Bottomless Pit”— itself the last song on the Chicago outfit’s final album, Tim Melina Theo Bobby—Tim Kinsella whispers, perhaps, his running arts manifesto: “There’s no bleachers; there’s no sidelines; there’s no out of bounds.” Across 25 years, roughly as many albums, and through its countless contributors, the ever-morphing collective have blurred the boundaries of rock, folk, dance music, electronic experimentalism, musique concrete, and more to the delight of many—or, depending on who you ask, the consternation of many others. The current iteration of Kinsella, Melina Ausikaitis, Theo Katsaounis, and Bobby Burg have fittingly delivered a well-rounded and widely varied finale, but then again….haven’t we been here before?

Back in 2001, following four full-length releases, Joan of Arc delivered How Can Any Thing So Little Be Any More? as their first formal goodbye. Pinging between snow-capped post-rock and recordings of literal children making songs up on the spot, it was a rather challenging and confrontational listen. Kinsella reformed the group in 2003, altering the roster for another 17 years before settling into this final lineup. Unlike that initial swansong, Tim Melina Theo Bobby is a more approachable listen.

The spindling, textural guitars overlapping throughout “Destiny Revision” recall the interplay found on early Joan of Arc records like 1997’s A Portable Model Of and 1998’s How Memory Works, but it also drills into the band’s more recent pivot towards rhythmic electronic beatmaking. To that point, “Feedback ¾” glistens with post-Drake dancehall rhythms and crystal-sharp synth arpeggios. Ausikaitis’ lead vocals perhaps hint at wrapping up Joan of Arc, at least vis-à-vis cinema metaphors (“It’s a natural conclusion…Don’t worry, he marries the girl next door”); She continues
making movie connections on “Rising Horizon,” comparing herself to a figure from Kenneth Anger’s Scorpio Rising.

While not as terror-fried as 2017’s He’s Got the Whole This Land Is Your Land in His Hands, there are still plenty of spectacularly noisy sections throughout Tim Melina Theo Bobby. “Something Kind,” for instance, has Kinsella and Ausikaitis’ discordant guitars sparking and scraping against each other like a pair of vintage Plymouths, as Katsaounis keeps the band locked into a groove, Sonic Youth-style (maraca in one hand, drumstick in the other). The drum machine boom of “Cover Letter Song,” meanwhile, finds Kinsella exploring the relationship between art and everyday work. His central character is, at various times, an envelope licker; car washer; record store clerk; grocery bagger; parking garage attendant. Through it all, they continue making art (“I prepared various coffee drinks, and waited tables stoned, and I wrote….I mopped floors, and I scrubbed toilets, and I wrote”).

There’s a sly, understated confidence running through Tim Melina Theo Bobby, one that invariably comes out of working on an art project for a quarter century. Joan of Arc’s final album is a graceful, yet still parameter-tweaking entry for the group. Ausikaitis may sing of a “natural conclusion” on “Feedback ¾”, but the members’ artistic drive continues outside of Joan of Arc—Kinsella in Good Fuck alongside his wife Jenny Pulse; Ausikaitis, Katsaounis, and Burg in the Aitis Band. Considering how the various members of the extended Joan of Arc family have blended into countless other projects over the years, it wouldn’t be unheard of for Tim, Melina, Theo, and Bobby to mutate into something new sometime further down the line. Again, there’s no out of bounds.