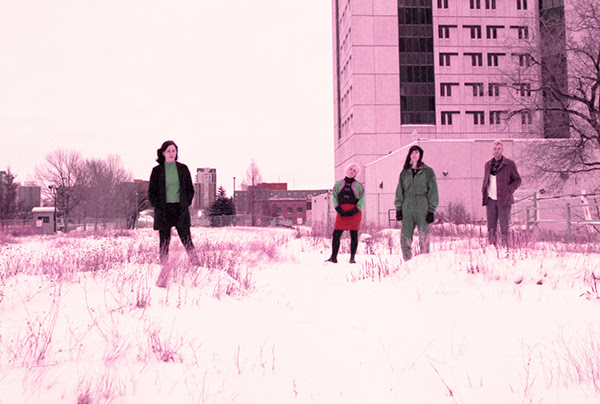 Edmonton, Alberta band Wares, recently shared the third single off their forthcoming release Survival, out April 24th, via Mint Records. The song, ‘Living Proof,’ is described as a synth heavy and dreamlike track based around Wares’ singer and guitarist, Cassia Hardy’s experiences after gender affirming surgery and like much of the album, is about perseverance and being true to your beliefs.

“Living Proof is how I remember the first few moments after waking up from gender affirming surgery. Weightless, euphoric, incoherent from anesthesia. Relieved above all. Availability for trans healthcare varies between provinces. In addition to ignorant or transphobic front line workers, there’s often huge wait times to see qualified doctors. Despite a flawed, criminally underfunded public health system, trans people endure and take what we need to thrive. This song is for us.” – Cassia Hardy

Previous Wares releases have flickered with a slow burn, yet Survival lights the fuse from ominous to explosive in its first 60 seconds. This change in mood can be credited to the past year of touring across Canada with the stalwart live band of keyboardist Jamie Mclean, bassist Matthew Gooding, and drummer Holly Greaves, who also perform throughout the album. Their arrangements are meticulous, while Hardy’s production alongside engineers Mason Pixel and Jesse Gander (Japandroids, White Lung).

“The songs on this album are really personal to my journey,” Hardy concludes. “The worlds inside it are about carving out an identity and learning acceptance so you can join a community for a better world. Finding people and opening your heart to companionship, love, and vulnerability is the real deal. I just want to reach people wherever I can.”