The Limiñanas emerge from the Shadows 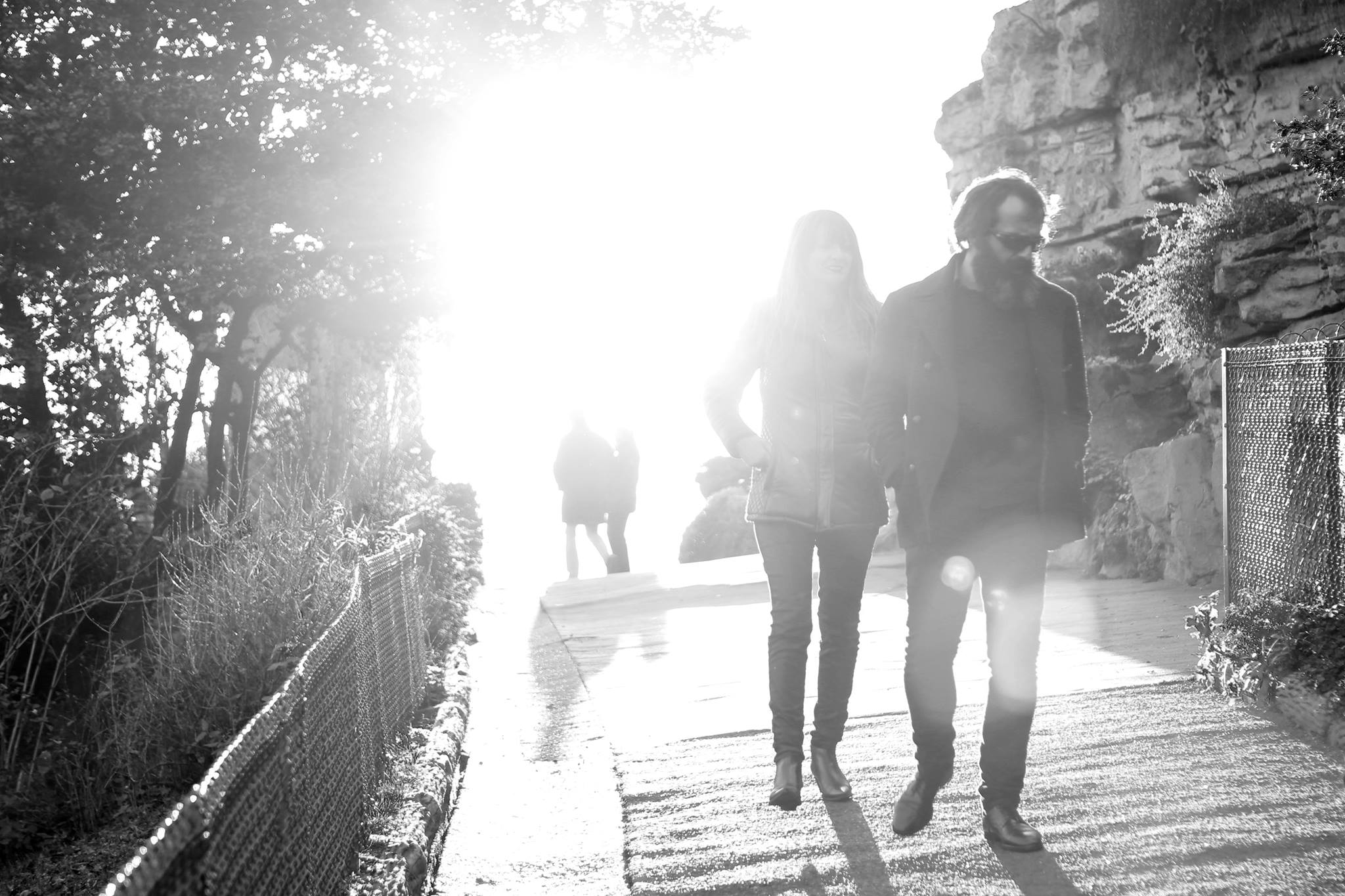 France is a country seemingly synonymous with musicians attached to the sounds of the future – acts like Daft Punk, Justice, Air and M83 come to mind here. The Limiñanas, meanwhile, are known for reflecting coolly – and at times darkly – on the past from both a musical and lyrical standpoint, and do so stylishly to boot. The husband-and-wife duo of vocalist/multi-instrumentalist Lionel and vocalist/drummer Marie Limiñana continue their exploration of styles like Serge Gainsbourg-esque French pop, psych rock and ‘60s Wall of Sound pop on their eclectic and sleek fifth album Shadow People, released back in January. We caught up with Lionel via email to discuss topics as varied as high school gangs, being in a band in a countryside town, and John Waters films. The Limiñanas begin a run of summer dates on June 15th in Castres Cedex, France.

Northern Transmissions: The Limiñanas’ album title “Shadow People” is inspired by an American myth about ghosts you can see from the corner of your eye. Why did you pick that title and why do you think it fits what you were trying to do with this album?

Lionel Limiñana: Shadow People tells the story of a kid that arrives in high school in the late ‘80s/early ‘90s, and who’s going to find his place in the gangs of that time. Most of these gangs have now disappeared from schools, but when I was a kid there were the mods, the skins, the punks, and the hard rockers. This discovery, the music, the films, the codes – all this will be the foundation, the influence and the guide all over his life. The dogmas and rules will always be there, over him, like the shadow people in the Anglo-Saxon myth.

NT: You recorded your newest album at Anton Newcombe’s studio in Berlin, and he collaborated on the song “Istanbul is Sleepy”. What was that experience like, and how involved was Newcombe in the creation of the record as a whole?

LL: We met Anton in 2016, a year before recording the album. He really helped us, firstly giving us the opportunity to play with the Brian Jonestown Massacre in Paris, and then offering us to work with him in the studio. Anton is an extremely generous and altruistic person. He was really involved in the recording and production of Shadow People. When we got to Berlin with 75 per cent of the album drafted, we had at least twice the number of tracks that ended up on the actual album. Anton recorded the guitars, Mellotrons and keyboards. Andrea Wright, his sound engineer, took care of the pre-mixes as the sessions went on. After four days, the album was almost done.

NT: You also have a song “The Gift” with Peter Hook from New Order, who you’ve worked with prior to this. How did you get acquainted with him?

LL: Michel Duval introduced us to Peter Hook. Marie and I have been huge fans of his music, his bass-playing and his books for a very long time. Michel knows Peter from the Joy Division time. We sent him demos and he agreed to work with us. We first recorded “Garden of Love” for [our previous album] Malamore and then we suggested for him to work on “The Gift”. We met Peter at Le Trianon in Paris for the first time last winter. Until then, we communicated by email. He’s as cool as it can get, and like [French musician] Pascal Comelade, he’s got the magic to get the sound and melody of a song with only a couple notes on his instrument.

LL: The record that I listened the most when I was a teenager was Fun House by the Stooges, and a Jacques Dutronc best-of, En Vogue, as well. Fun House changed my life. With my high school friends, we spent hours trying to correctly reproduce the Stooges’ songs. We bought fuzz pedals and amps on credit. Nicholas, our guitarist, was the first to understand how Ron Asheton mixed the fuzz and the wah-wah, and how to play around with the feedback. Our singer at that time – who is still one of my best friends – ended up naked at all our shows, and it was crowded since we were almost the only band in Perpignan back then, and obviously that gives one a very special status in high school and parties. That’s how we started. In a small countryside city, that didn’t go unnoticed. I guess that, besides the sound and my fascination for Iggy [Pop] and the Asheton brothers, we saw ourselves in what the Stooges told – particularly when they talked about boredom.

NT: You’ve also said that this new album is inspired by where you were at during your high school days. What kind of music that you listened to at that time really inspired this album the most?

LL: When I was in high school, I listened a lot to American garage punk from the ‘60s: the Back From the Grave [compilations], the Pebbles and also all the bands influenced by that culture. The Cramps, the Fuzztones, the Fleshtones, the Creeps. Then the Stones during the Let it Bleed period, the Formidable Rhythm and Blues compilations, the Kent compilations, the Who, the Remains, [and] the Seeds.

NT: “Le premier jour” has the “Be My Baby” drum beat, which we’ve heard in a lot of modern songs. What do you think it is about that rhythm that makes it still so catchy and inspirational for music?

LL: The productions and ideas of Phil Spector have been looted by everyone. It’s a shame that we only talk about his mischief with justice and his catastrophic wigs. The Ronettes, Darlene Love, The Crystals, Ike and Tina Turner – all these albums give me goosebumps. We humbly try to recreate his studio techniques, like doubling the vocals with some shift, doubling the snares, the toms; all that stuff. The “Be My Baby” beat is one of the [parts] that we borrow from him often. But we shouldn’t forget about the Wrecking Crew, they are responsible for many things we find fascinating. Regarding the beat, we’ve done that at least three times already.

NT: You are from a smaller city in France called Perpignan, which has just over 118,000 people. You’ve said before that it’s a place with no clubs or places to go out at night, and also one with a lot of unemployment. How much do you think being in an environment like that one helps provide inspiration for making music?

LL: Most of it is thanks to a cocktail of unemployment, boredom, record shops and libraries. In every small countryside city where you can find those ingredients, there is something interesting going on – in music, plastic arts… How can you explain that a city like Perpignan has hosted bands that [have] recorded for [labels like] In the Red, Norton, Born Bad, Trouble in Mind, Because and many others; and then nothing in Montpellier, a big student city which is active and full of creative places? Same goes for the U.S. or the U.K. As soon as you start having infrastructure, grants and a certain comfort, music becomes too shaped and loses interest.

NT: On this album, sung parts are often in English but spoken word parts are in French, and there’s a bit of Italian as well. Why is that?

LL: Because they are the two languages that we prefer in pop music – and I don’t speak Italian perfectly! In general, we use French for spoken word when we want to tell a story. But it is a very delicate and fragile language. Writing in French is what takes me the most time, way more than recording all the instrumental parts of the album!

NT: What do you notice about how people in the U.K. and U.S. have responded to your music at live shows compared to when you play to crowds in France?

LL: The reactions in the U.S. and the U.K. were extremely warm and touching. We haven’t played much there for economic reasons. We’re 10 people on the road and it’s very difficult. But I still don’t believe it. I can’t believe that our fiddling in the garage would interest someone! For us, playing in big halls in France is something very recent. We’ve always been a band that plays in bars and clubs.

NT: You have a song on this album called “Pink Flamingos”, which shares a name with a very controversial film from the early ‘70s. How much have films inspired your music over the years?

LL:You’re the first person to talk to us about “Pink Flamingos” as a reference to John Waters! Thanks so much! That’s the difference with France! Cinema is at least as important as music for us, and also food! During my child and teenage years I watched a lot of films. I love the films of John Carpenter, John Milius, Tom Holland, Roman Polanski, [Stanley] Kubrick, [George] Lucas and [Steven] Spielberg that I binged when I was a kid. But also the films of the ‘60s and ‘70s: comedies, dramas, fantasy films – from [Federico] Fellini and Dino Risi to Dario Argento. Then French cinema: the classics, [Jean] Gabin, Lino Ventura, Bourvil and also early [Jean-Luc] Godard and the film noir. Lots of things.

NT: Lastly, what do you hope people will get out of the Limiñanas’ latest album that they might not have gotten out of your previous material?

LL: I hope they will remember a story, an image, a riff. But it’s too pretentious. I really don’t know how these albums are perceived. It’s a bit particular for us. We tell a lot of stories, even though it’s usually through references that are only understood by our friends. We didn’t hear about yé-yé on the promo for this record, and that feels good. We are actually anti yé-yé.

Answers are translated from French.