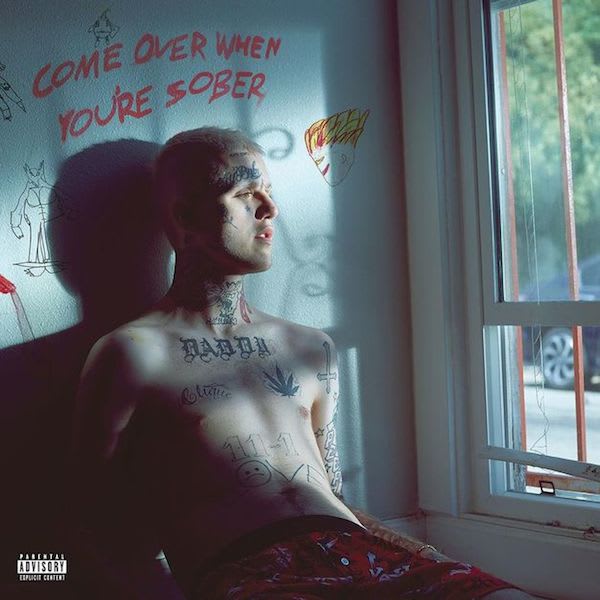 Come Over When You're Sober Pt. 2

Posthumous releases run the risk of tarnishing a great body of work, but Lil Peep proves he was on the verge of something interesting. Through a mix of rock and hip hop, Lil Peep tests the limits of genre as it appears today and manages to create something that works as a fit for both. Though it’s not always the most separated from either genre’s tropes, Lil Peep has a swan song worth checking out if you were already a fan.

The overall mood of the record is one of its finer points, as the writing can often be predictable or at least too familiar. On a track like “Broken Smile (My All)” you’ll recognize hooks from a range of songs, but there’s a distinctly powerful energy that the hazy production brings out of the song. Though this isn’t quite enough to save it all, this kind of sound makes something like “Runaway” mesmerizing and while its mix of genre’s can feel excitingly experimental at times. As a kind of collage work of a track, the song is definitely a lot more intriguing than you’d expect. Even with its cutting riff however, “Sex With My Ex” loses a lot of this mystery and ambitious decision-making, as it tends to let its style really overtake its substance noticeably for generic hip hop.

With a tone of 90s pop-punk, “Cry Alone” pulls back into the more addictive genre-merging that Lil Peep was great at. While it’s lyrically a little so-so and hard to understand, Peep makes its catchy moments matter. There’s a lot of inconsistency to the album though as a whole, where tracks like “Leanin'” often meander or go through the motions pretty overtly. Though “16 Lines” itself isn’t the most original track either, its mix of disorienting effects creates a smoky tone that matches its story and emotions with really impact.

It’s heartbreaking to hear the exploration and ideas that Peep was bringing out on “Life Is Beautiful” as it showcases a new world for his sound that starts to feel excitingly new and distinct. More than anything, it’s the sense of brightness in his outlook that makes this one of the more testing listens emotionally on this posthumous release. “Hate Me” starts pretty straightforward in terms of pop, but the way its acoustics transport you into a world of echoes, really gives so many parts of the arrangements a unique flavour. This attention to detail really shines next to many of the one-trick productions of the album, and shows the promise in Peep’s writing that we lost. The same can’t be said for the ineffectual “IDGAF” where Peep completely disconnects both within the context of the song but also from a writing and performance perspective.

To round out the record, tracks like “White Girl” and “Fingers” show the most indie-rock colours of the record, and start to blur the lines between the two from the writing side. Here the sense of jaded lyricism fits the music a lot tighter and sees Peep trying to define what they mean to his life, while closing the album memorably.