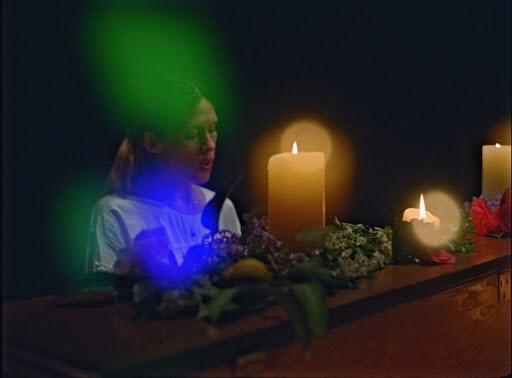 Lia Ices has dropped a video for the title track of her full-length Family Album. Directed by Aaron Brown (Cass McCombs,  Girls), the clip represents the relationship between the artist and the human aura, which exists beyond the capacity of our physical eyes. Setting out to deconstruct the relationship between invisible human energies and contemporary filmmaking, they used “Aura-photography”, which captures the energies emitted by all living creatures.

“Family Album (the full album) comes from my realizing the power of my femininity and tapping into the wonder that is nature. As with all of my music, I am documenting myself, I am documenting my life. It’s a spiritual practice that helps me process what it is to be alive.

The song family album is about crystallizing a very specific moment in time; the preciousness of my tiny daughter, the real threat of losing our home to a wildfire, knowing that I found my own Eden on the mountain and then imagining it disappearing. It is about gratitude for the here and now. The video for the song takes that documentation even further by capturing my aura as I perform the song in one take, adding another layer to what one can communicate when they lay their heart out — the poetry, the melody and the light.

Making art is communal,” says Ices. But that doesn’t mean Family Album isn’t the most Lia Ices album to ever exist. Part of that is allowing a higher level of collaboration than ever before, part is motherhood, part is Sonoma’s Edenic Moon Mountain, part is the Wild West freedom inherent in Californian lifestyle, part is an awareness of herself, and, most significantly, of growing ever more into that. Ices started her own label, Natural Music, because she felt empowered by herself, by the places that she was able to reach within herself and translate into music, and she wanted to follow the freedom that feeling gave her. “There’s a synchronicity to it, about the way things have happened or who I’ve met,” Ices says of Family Album. There’s a “universal timing” to this record that it’s had since its beginning, with Ices’ ripening. “It keeps being a teacher to me, it has its own energy field around it.”

Family Album, was released via Ices’ own label Natural Music. She went into the studio with the late producer JR White (Girls) – marking the last album he worked on. Lia says, “experiencing JR’s creative genius so intimately is a gift I will always cherish and I’m so grateful my songs were touched by his magic. This album means something different to me now that the person I made it with is gone — it is a symbolic reminder that music is eternal, he lives forever in this album.” They recorded Family Album all over California: three studios in LA, one in Stinson Beach, and one in San Francisco. “There’s a clarity to the album,” Ices says of the production, “you can hear what I’m saying, you can hear what the instruments are doing. But I really think that because the production supports the ethos you can dive in even deeper.” It was organic: Ices, White, and the four-man backing band she had record with her, live in the studio.