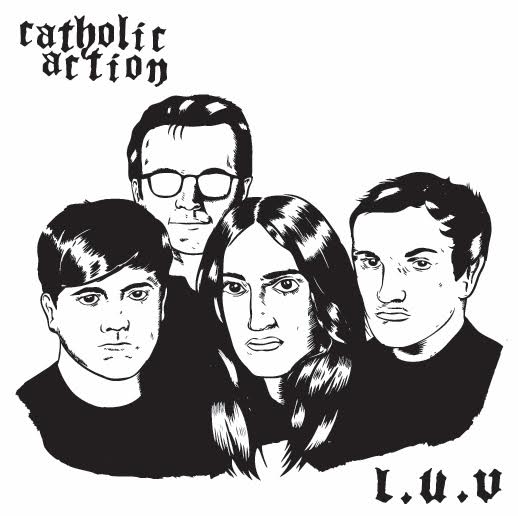 Catholic Action are a product of Glasgow’s famously fertile music scene but have won fans across the UK. After a run of well received gigs in their hometown the group are ready to release their forthcoming debut release L.U.V. for Luv Luv Luv Records (Spector, Only Real, Splashh, The Garden). Listen now via SoundCloud below.

The four-piece band are centered around vocalist and guitarist Chris McCrory – already known for being the drummer in Casual Sex, another of Glasgow’s leading musical lights.

McCrory, still only 24, became a full-time producer and recording engineer straight from school after establishing his own studio. While helping many of the artists in Glasgow’s burgeoning DIY scene, McCrory is also an exceptional songwriter in his own right and his group quickly became the most talked about in town.

Catholic Action were formed in 2014 by McCrory alongside Jamie Dubber on bass and Ryan Clark on drums. Andrew Macpherson later joined as lead guitarist to add an extra punch to the group’s own brand of glam noise rock.

The group were personally invited by Alex Kapranos to support FFS at their sold-out show at the Barrowland Ballroom last August. Just days later, Carl Barat was in touch to ask them to open for The Libertines when they played Glasgow’s Academy the following month – an invitation to open on Swim Deep’s UK tour in October 2015 followed.

L.U.V. was recorded at the Green Door Studio in Glasgow and produced by Sam Smith (Casual Sex, Mother and the Addicts). The single was mixed at Parr Street Studios in Liverpool by Rich Turvey (Blossoms, Clean Cut Kid).

Catholic Action will perform live at: