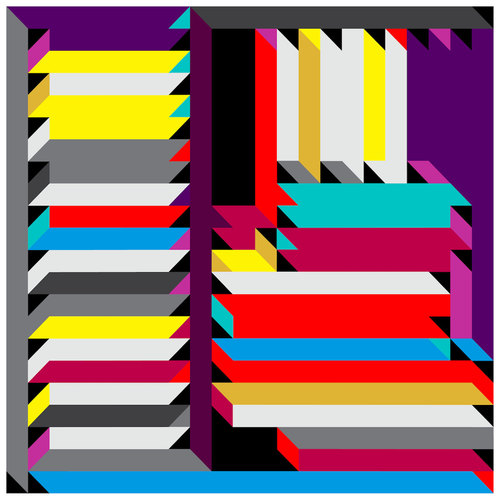 You know when a press release states “a sensory overload of information” you’re in for a wild ride! For Battles’ fourth LP, the bizarrely titled ‘Juice B Crypts’, the smorgasbord of noise is brain meltingly overwhelming. The now duo, bassist Dave Konopka departed earlier in the year, leaving guitarist/keyboardist Ian Williams and drummer John Stanier to carry on with the band’s audio melee, took the direction to construct, reconstruct, construct once more and generally rip things up until they were happy with the sounds they could bend and break into whatever mould they wished to use. Like on Battles’ second outing ‘Gloss Drop’, ‘Juice B Crypts’ contains a range of guest artists including Yes’ Jon Anderson, Prairie WWWW, Shabazz Palaces, Xenia Rubinos, tUnE- yArDs and Liquid Liquid’s Sal Principato. With each collaborator the album goes off on a weird tangent that’s wonderfully peculiar and otherworldly.

‘Ambulance’ signals the opening chimes to ‘Juice B Crypts’ via a wave of plastic merry-go-round noises before morphing into a jerky, repetitive groove that swells in intensity the longer it rotates. Following track ‘A Loop So Nice’ is the musical equivalent of a cooking stove, full of different bubbling pots of wild and exotic flavours; sounds evolve, dissolve, regenerate and simmer with a quirky, jazzy shuffle. ‘Fort Greene Park’ adopts a retro sci-fi vibe but if aliens decided to claim the blues as their own and then completely destroy it. The record’s title track is a migraine-inducing mesh of sounds akin to all of Las Vegas’ slot machines going off at once while a modem is being dunked in acid.

The one-two finale of the dual parts of ‘Last Supper of Shasta’ featuring tUnE- yArDs, contains enough twists and turns to warrant an album of it’s own; commencing like a heart attack whilst watching a kids TV show before evaporating into a explosion of static, it’s the point ‘Juice B Crypts’ implodes, not before all the electronics disperse, leaving the album to finish on a delicate piano refrain. With the added element of vocalists, ‘Juice B Crypts’s twists and turns take on eclectic terrains; on ‘They Played It Twice’ Xenia’s gospel pipes are wrapped around a whirring synth siren, as if soul music has gone intergalactic before things go interstellar drum ‘n’ bass. ‘Sugar Foot’ featuring Jon Anderson and Prairie WWWW, takes you on a squealing synth odyssey, from a Japanese cyber ritual to a squishy, loose waft through spiralling technicolour. ‘Titanium 2 Step’ summons the powers of Liquid Liquid’s frantic dance-punk, while ‘Izm’ could be a Gorillaz track, with Shazbazz Palaces adding a strutting vocal flow to the sturdy drum beats and quirky boingy nuances.

Juice B Crypts is now available via Warp Records