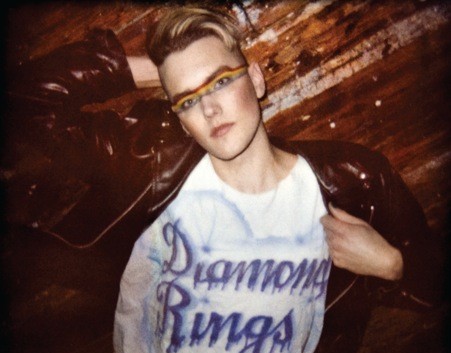 Northern Transmissions chats with John O from Diamond Rings. Catch him and his band live, or check out the new album available on Astralwerks.

NT: Your career prior to ‘Diamond Rings’ was mostly playing in Indie Rock bands. What helped pushed you into going at it solo?

JO: I wanted a platform to explore different musical and visual concepts without the pressure of having to compromise.

NT: It was a bit of a dramatic change musically and personally, was it a little intimidating from the onset?

JO: I was just making videos and music for myself and my friends. Things happened organically.

NT: What happened with the ‘Track ‘All Yr Songs’? Did Sony really force you to remove it from Youtube?

JO: No. YouTube removed it without asking. It really wasn’t that big a deal. It’s back online now and that’s all that matters.

NT: What was the experience like when you Played on Letterman? Did you get to meet fellow Canadian Paul Shaffer?

JO: Briefly. He’s got some great synths and the catering backstage was great.

NT: On ‘Free Dimensional’ you worked in a bit of a bigger studio than ‘Special Affections’, were you excited being able to experiment with so many new sounds?

JO: I recorded most of the tracks for this record on a laptop. The vocals and guitars were recorded by Damian Taylor, who also did all the mixing. He has a great studio and great ears but lots of the experimenting still just happened in my bedroom in Toronto.

NT: Can you tell me a bit about the ‘Remix Rainbow’ releases, how did that come together?

NT: You covered Sebadoh’s ‘On Fire’, what drew you to this song?

JO: One of my old roommates works at a record store in Toronto and frequently gives me ideas for potential covers. The Sebadoh one was on a mixtape that the bassist in my old band played for me on tour years ago. I thought the lyrics were great.

NT: Which five Albums continue to inspire you?

You mean like 5ive the band? Obviously they’re a big inspiration. Otherwise I’d go with Avalon by Roxy Music, Diva by Annie Lennox, Born To Run by Springsteen, Resurrection by Virgo Four, and Futuresex/Lovesounds by JT.