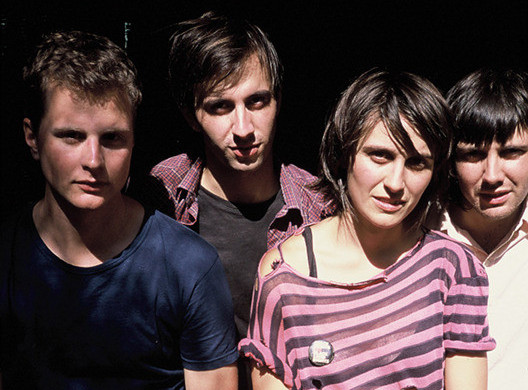 Dick Diver hails from Australia, and consists of two guitarists, Rupert Edwards and Alistair McKay, drummer Steph Hughes (Boom-gates) and bassist Al Montfort (Total Control). Formed in 2008, their first album, New Start Again, met with critical praise. Calendar Days, the follow-up, was described by Rolling Stone as “everyday Australian life made bittersweet and poetic,” and named by The Guardian as the best Australian album of 2013. Now they are about to release a new album, Melbourne, Florida, which continues to explore a musical universe that’s both warm and sharply observant at once. Northern Transmissions wanted to know more, and Alice Severin lobbed some questions down under.

Northern Transmissions: Hello! How are you and where are you right now?

Rupert Edwards: Hi, I’m good and on holidays in Melbourne. Most people are back at work now, suckers.

NT: Is the name of your band taken from the Fitzgerald character in Tender is the Night? Is there a story behind the choice?

RE: Yes. When the band started I was into band names that sounded like one person, like Pink Floyd. I had just read Tender is the Night and thought that would be a good choice.

NT: Calendar Days, your last album in 2013, topped the Guardian list of best Australian albums. Did that success change your approach to songwriting or recording? And do you still like to record in remote locations?

RE: When I was a kid I thought successful bands were, like, Ace of Base and The Spice Girls. Though some people (more than expected) seemed to enjoy our last record, its reception didn’t make a dent in the Ace of Base part of my mind. The approach didn’t change. Leaving the city to record is like natural Xanax, which is good for us.

NT: You put the band together in 2008. How did you all meet, and what made you decide to make music together?

RE: I have known Al McKay since I was a teenager. We started playing music together when we were 19 or 20. But we were frustrated post-teens! Nobody understood us. Haha. Then Al McKay met Al Montfort. He had a good vibe plus he knew Steph Hughes. She jammed with us and it worked. I couldn’t believe my luck and thought it wouldn’t last beyond a few weeks.

NT: People seem surprised that your songs talk about life in Australia. Why do you think that is?

RE: The country is run by people who wear their arseholes on their sleeves. ‘Life in Australia’ becomes for many people a feature of music or art rather than something that is inherent to it. Maybe that will change someday.

NT: You had a notable moment at last year’s Meredith Music Festival where you did a kind of performative statement on climate change. Do you think the moment has come for bands for speak out about issues, and does it reflect a growing awareness that you see in people generally?

RE: If there is one thing that won’t change in the world, it is a band playing rock n roll while having a dig at some of the most woeful people in the world. Bands speaking out – great – but it is fantasy to think that this will have a real effect on anything, beyond making ourselves feel better. Yeah, I am a pessimist. As for a growing awareness – I have no idea!

NT: The new album, Melbourne, Florida, will be coming out in March 2015, and will be your first full-length release in the US. What made this feel like the right moment to get the word out to an even wider audience?

RE: I have always wanted as many people to hear our records as possible and we’ve been very lucky to have Bill and Lisa at Trouble In Mind keen to put out this record in the US.