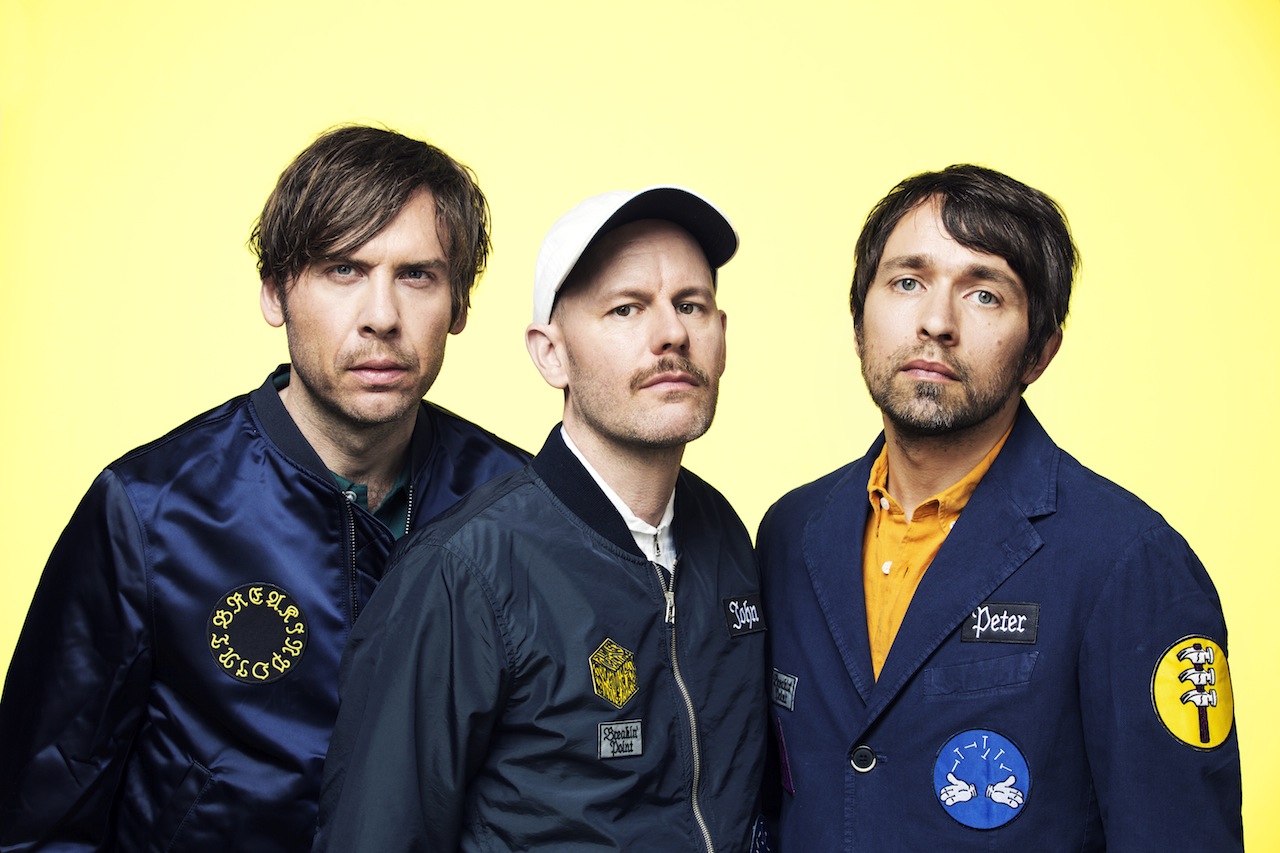 Northern Transmissions: I like that “Breakin’ Point,” the title track off your album starts with the whistle. I feel like it is a such a playful shout out to the track that really helped you break into North America, “Young Folks.” I feel like the song itself, the lyrics and the composition serve to represent your transition from an older, slightly more DIY sound, to something more polished.

Peter Morén: With the whistling, as with “Young Folks,” it wasn’t intentional. It was something we were doing while we were recording, and then someone decided to keep it. This time there was maybe a bit of a reluctance on our part because it might seem so obvious, but after a while it just felt great to bring [the whistle] up in the mix. I whistle all the time. People whistle, so maybe we shouldn’t over-analyze that. When we realized [Writer’s Block] was ten years ago, we thought it was a nice tribute – instead of an anniversary tour, or the big deluxe box or whatever – to put out a new record that we liked a lot, and have [whistling] on a completely different type of song. It’s funny when you actually look at the lyrics because “Breakin’ Point” is about expecting a child, basically. So it is a quite deliberate perspective from meeting a new lover at a bar, which is what “Young Folks” was about.

NT: You have been Peter Bjorn and John since your debut self-titled release in 2002. do you think the music industry has changed since the early 2000s?

PM: It is a completely different landscape. Even when we put out Writer’s Block, it was a watershed. We got a lot of notice around “Young Folks” because of Myspace, which is now a graveyard. But that was when internet stuff just started happening, and you realized you could get hype, or write-ups on blogs without actually having a record out. Now records, physical records, are on their way out. It’s different in different countries but in Sweden, where we live, it is dead. Record streaming is the biggest in Sweden. … It’s hard because when you put together an album, you really put a lot of effort into the order of the songs and making a bigger picture out of it. Then you get into these meetings and everyone says, “Ah, you have to get onto that playlist.” That’s the most important thing, to put the songs on a playlist in Spotify, or whatever. I get it. but it just feels like it’s diminishing the album.

NT: I read in another interview that Breakin’ Point deliberately emphasizes individual tracks over the album as a whole. Is that decision influenced by the culture around playlists and single streaming?

PM: Yes and No. It was a way of approaching the recording of the songs differently. We really wanted to make classic pop songs. We wanted to bring in a lot of different people to make every song shine in different ways. But at the same time, [Breakin’ Point] works really well as an album because of that, because you feel that all the songs are really strong. My background, I come from the Beatles, which is what I listened to as a kid. When you listen to those pop songs, it’s all singles, basically. … I think [Breakin’ Point] is a really strong album because we approached it as singles. In the past we have always had the progressive rock song, or the long drone-y shoegaze song, or a super slow ballad, but we decided on Breakin’ Point to not do any of those types of songs. This time we wanted to focus on shorter pop songs.

NT: And it’s true, the shorter pop songs give your album a really contagious quality. All of you also collaborate in different genres, and I hear those influences in your music.

PM: I would say that comes out when we play our live shows, too. When you have three artists and you mix songs from a lot of the different albums, it becomes a really dynamic, eclectic show. It’s just nice as a live experience, to go from folk, to super pop, to disco, to noisy … we do a lot of different things. As a live experience, I think that’s great.

NT: Since your release prior to Breakin’ Point, Gimme Some, you have collaborated with several musicians, including Canada’s own Drake. What purpose does collaboration serve for you? Is it strictly promotional, or artistically driven?

PM: There’s so many different types of collaborations. If you’re going to do music full time, you’re going to have to do different stuff. You can’t just focus on one thing, and it’s nice when it’s very different. You might go out and play with someone for a couple of shows, or write songs for someone’s record. Or as you say, the one-offs that we have done with bands and artists. You get an invite. It’s so different each time, because sometimes you don’t meet the person. It’s very modern. You just send files over the internet and work in different studios. I think you learn so much from it. Especially when we do stuff individually outside of the band, we get back and have experiences from different scenes. We learn new stuff, and come out stronger as a trio. I think we all really need it.

NT: Breakin’ Point is released on INGRID, which is your collective’s label working in many different media. What made you form and name this collective, as opposed to just continuing collaborations with other artists undefined?

PM: It actually started with this studio that Björn and Pontus [Winnberg] from Miike Snow took over, an old recording studio in Stockholm. They called it INGRID. I think part of the reason was they wanted a really Swedish name. They took over that studio, and from that came the idea to do something bigger than just the studio. We started doing this organization, basically to have an umbrella of activities outside our main activities. If I do a solo record, I have a really quick outlet. I don’t have to go to a label, or try to sell it. I know [INGRID] has distribution. And we have people working with us. We have done some shows together, big festival shows with a lot of people on staff and guests. [INGRID] just makes it easier. We mostly do music, but there are some filmmakers and designers who are also involved in the project.

NT: The branding of this new album is really interesting. The drawings that accompany it are inanimate objects, mostly industrial or related to construction, such as the hammer with three heads. But there is also a hand, a disembodied white glove hand, synonymous with Mickey Mouse, or another such animation. It is goofy, and also a little dark. Who is responsible for this visual concept, and was it a deliberate attempt to balance the more serious topics you discuss in your songs?

PM: It is a Swedish artist named Jonas Torvestig, and he connected to INGRID. He also did artwork for Gimme Some. We liked this pop art thing. In regards to the tools, it sort of came up at the time. even though no particular song had anything to do with it. We worked a long time on this record. We liked this idea of going to a factory, a pop factory, of being craftsmen, putting on working clothes. There are also a lot of songs [on Breakin’ Point] that have related lyrics. “Dominos” is all about different relationships between bosses and understudy, or just everyday grind work, and how socially and politically, one thing can affect the other. And then the song “Pretty Dumb, Pretty Lame” is all about music industry, and that sort of work. There are a bunch of songs that have nothing to do with work, but still, it’s just something that fit in. We all like that absurd mix of fun, and something disturbing and dark. I think it’s nice, and it reflects the music, too.