“Heard Me Right” by Amtrac

Multi/instrumentalist, producer, and songwriter Amtrac has released “Heard Me Right”, a track off his third album Extra Time, available February 3rd via Openers. The single is accompanied by a humorously offbeat and surreal music video shot in LA on vintage video tape. Feeling like a slice of VCR-quality nostalgia from the late 80s/early 90s era of music television, the video finds Caleb Cornett (aka Amtrac) running around LA, putting quarters in parking meters and joyfully dancing in the extra time it earns him. The release follows collaborations with Future Islands’ Samuel T Herring on recent single “Domino” and Diplo and Leon Bridges on “High Rise”.

Featuring Amtrac’s own vocals, “Heard Me Right” is a cut of pristine, shimmering throwback of the highest caliber featuring layer upon layer of gritty synths atop a pulsing backbeat. The video’s vintage aesthetic continues Amtrac’s long fascination with the iconic late-90s wave of groundbreaking electronic music visuals in the vein of pioneers like Basement Jaxx, Fatboy Slim, Aphex Twin, and Prodigy.

Regarding the song and video, Amtrac cryptically alluded to the connection between the visuals and title of his forthcoming LP: “A man takes it upon himself to provide the people of greater Los Angeles with extra time. He can dance, he is strong, he has plenty of coins. Everyone could do with a little more extra time.” 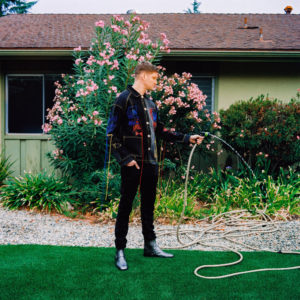