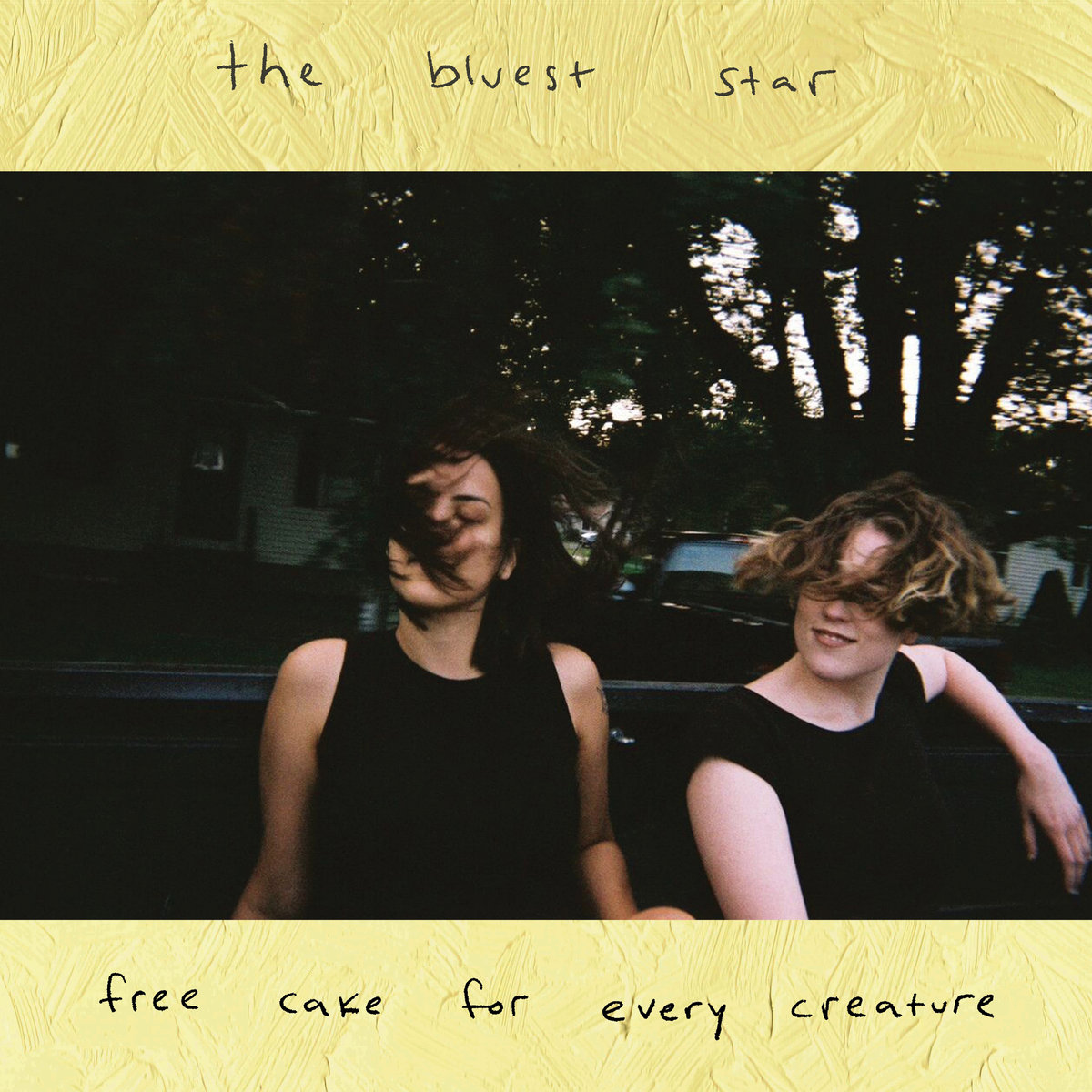 Free Cake For Every Creature

There’s an overpowering feeling when the right mix of alt-country guitars come together over indie pop. On The Bluest Star Free Cake For Every Creature take a Mazzy Star-like sensibility and combine it with the solemn pop of Veronica Falls to make something emotionally complex and exciting. Though its music stands up better on full listens than individual tracks, there’s a magic in its guitar lines.

With rustic guitars opening the way for raspy vocals, the album blooms open on “Riding Into The Sunset In A Busted Car.” It’s Free Cake For Every Creature’s ability to switch the emotions behind these progressions however that keep the song free-flowing and dynamic. “Around You” quickly shifts things into a brighter pop world, with spritely vocals entrancing listeners deeper and deeper into their sound. It’s the magical pre-chorus drums and glistening riffs that make every chorus bounce with that makes it feel like a cheery take on Veronica Falls music. The carefree sounds of “Whole World Girl” take this in a more driving direction for something riff-driven but not overtly out there.

Through the keyboards and drum-machines of “Shake It Out” Katie Bennett and company take a much more relaxed approach and let their calming sounds rush over listeners. While it’s not the most varied track, its simple groove makes for a truly enveloping feeling. “Took A Walk” continues this same energy while using a synth so primal it feels like a dial-tone pitched around. Though it’s less overtly powerful of a sound, it fits the continuation of the album perfectly. With a slow-burning fury, “Sideline Skyline” stomps out with multiple guitars carving out an emotional release in the track. As Bennett lets go of her own emotional fall-backs in life, the track grows into a satisfying sweep of twangy strings.

“Sunday Afternoon” shifts things over to the latter section of the album, as Bennett slowly builds her album’s emotions to a fiery peak while not locking into a distinct direction in the track. Through the colourful storytelling of “In Your Car” there’s a subtle rise in the track’s tension that makes each chorus so exciting. Though it does fade out a little anticlimactically, the sharp narrative makes sure you get what you came for. In the sorrowful vocals of “Tom or Mike or Pat or” the sense of indecision and frustration is too much to bear. As Bennett both laments her position and the freedoms she still has, it makes the music all the more charged and electric.

The pumping drums of “Hometown Hero” even lend a percussive quality to the guitars, and give the song a steady chopping quality. Weirdly enough it’s the song’s soft touches and atypical effects that make it the most fun. Given that “Christina’s World” isn’t doing anything new musically, it’s truly a treat to follow the heartwarming story in its lyrics that make its tempered hooks so impactful. “Goodbye, Unsilently” does this with even more barebones arrangement and style, for a track that really lets its emotions carry it.

Free Cake For Every Creature find a balance in these two styles on “Be Home Soon” as the personal and touching writing is underscored with tons of swinging riffs. While it’s rarely as punchy as the start of the album, it slowly brings you in to understand its story. Like old Cat Power and Basia Bulat, the sparkling string lines of “Night Music” closes the record on a sparse but homey feeling that lets all its little imperfections keep it fun.