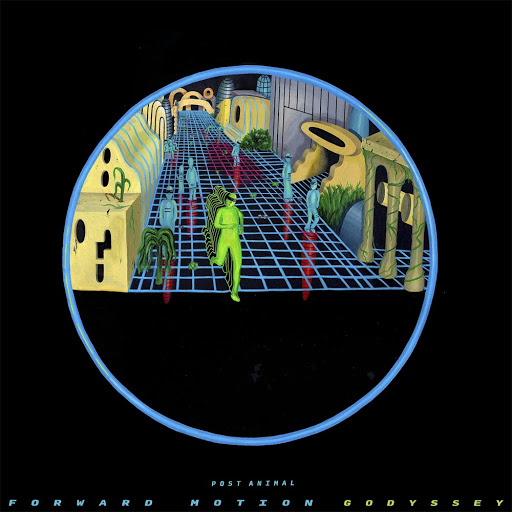 Post Animal are a new animal since Stranger Things star Joe Keery left the Chicago rock group after their 2018 debut album, When I Think of You in a Castle. But the eclectic debut showed a band that was brimming with ideas and hungry to experiment. No doubt, Post Animal would have evolved beyond Castle with or without Joe.

Their follow-up, Forward Motion Godyssey, delivers on their potential to evolve. It also delivers on their stated intentions to throw curveballs at fans and to be as over-the-top and dramatic as they’ve ever been. Opening track “Your Life Away” drifts like a foggy raft ride down a river that empties into an basin of psychedelic guitar solos. The chugging, burning, prog devastator “Post Animal,” which takes “self-titled” to another level, is, indisputably, the heaviest song the band have written. Similarly, the volcanic “In a Paradise” is full-blown stoner-rock.

Not only are most of the songs on Godyssey over-the-top, they’re multi-movement mini-epics. Third single “Fitness” opens with bongos shrouded in cavernous vocals and atmospherics. Two thirds of the way into the track, a gigantic guitar riff falls like a stalactite, rupturing the meditative tranquility. Next is the two-minute synth interlude “The Whole,” a mini-odyssey in itself stuffed with spacey sounds. The cascading “How Do You Feel” begins with a serious tempered electric groove. And speaking of groove, “Safe or Not” builds off of disco and funk. But feet don’t stay planted on the floor during this song; even “Safe or Not” drifts towards lofty heights.

“Fitness” and “Safe or Not” also most clearly convey two of the album’s main themes. “Fitness,” the band’s multi-instrumental Jake Hirshland says vaguely, is about “persistence in the face of loss.” Meanwhile, “Safe or Not,” according to guitarist Javi Reyes, is about “feeling like you can’t be yourself.” But nothing seems to be holding back Post Animal on Godyssey.

As stated by drummer Wesley Toledo, Post Animal also wanted Godyssey to be as poppy as they’d ever been. While Godyssey contains poppy moments for sure, they don’t match Castle cuts “Tire Eyes,” “Heart Made of Metal,” or “Ralphie.” The first dose of pop on Godyssey comes 10 minutes into the album with “Schedule.” The song’s tempo lingers in the mid-range, but “Schedule” radiates with bright synthesizers and ascending guitars. If there’s one song that evokes the vastness and pink, clear-air sunset glow of Big Sky, Montana, where the band spent eight days writing and recording Godyssey, it’s “Schedule.”

“Sifting” bookends the busy, winding, unpredictable album with relative calmness. But unlike “Your Life Away,” “Sifting” functions solely as an outro, unconcerned with grandeur or ostentatiousness. Like the rest of Godyssey, “Sifting” captures a sense of grandeur. However, the grandeur “Sifting” captures is one of dwarfing vastness, at once isolating but serene.

With insurmountable peaks and valleys and surprising twists and turns, Forward Motion Godyssey is sometimes inconsistent. But it successfully disrupts expectations, throwing fans off their scent song after song and even within a single song. Try to follow along, though, and the discovery of new details will be your reward with every listen.