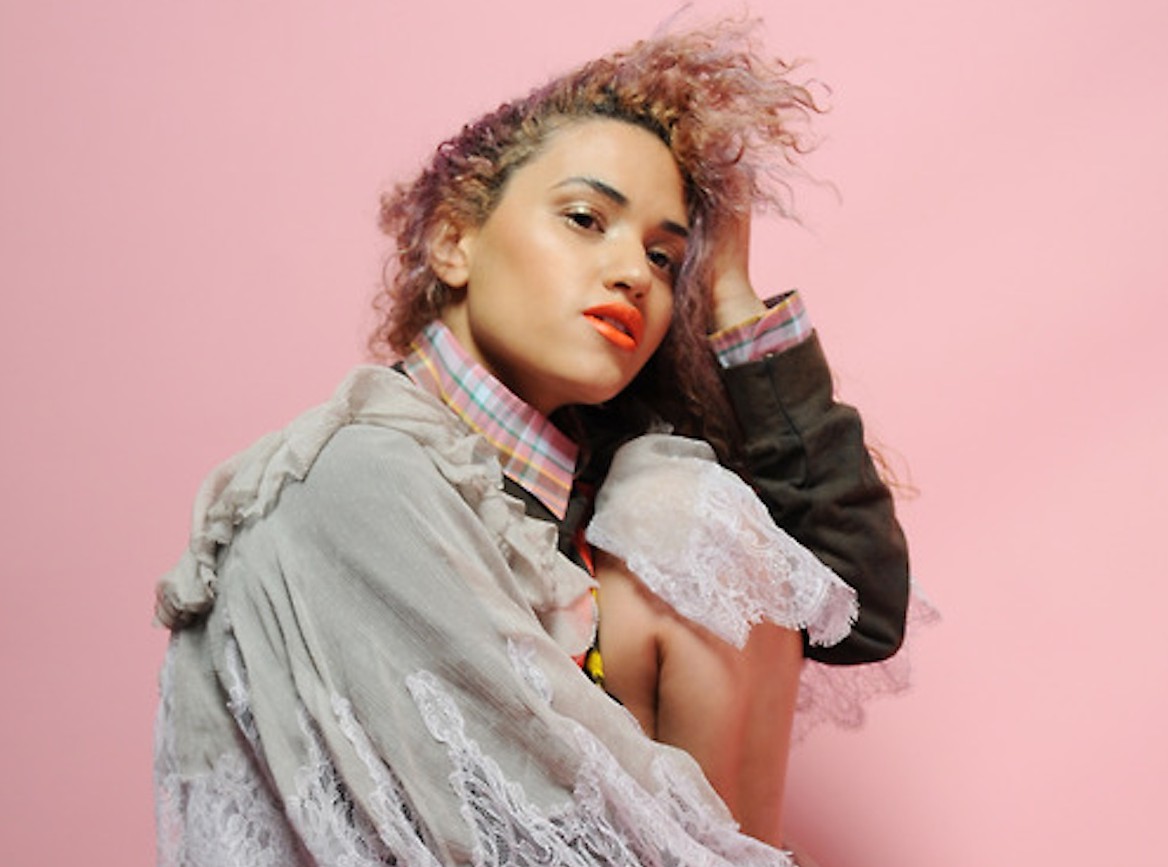 It’s just about time for our interview and things are running a bit behind on sound checks
downstairs at the Piccolo Rialto. It being Pop Montreal, it was hard enough to find a quiet
place for a quick interview. We sided with a bench right outside the Rialto Theatre venue
and began to check. Little did we know a huge dance party was just about to erupt
outside after Arcade Fire’s Reflektor Tapes screening. Lorely Rodriguez aka Empress Of,
and I tried our best to keep composure as the sound of pounding drums and talks of
Lorely debut album, Me, filled the hot September air.

Sean Carlin: Congratulations on your debut album, Me, which came out just last Friday, how
has the success surround that been so far?

Empress Of: It’s been crazy! Yeah, I mean my album came out and then played my show in
New York, Hall of Williamsburg and then I went on tour. It’s just been like crazy. Tomorrow will
be one week.

Sean Carlin: What made you want to write and produce your album, Me, in isolation and was
there a particular reason why you chose Valle de Bravo in Mexico?

Empress Of: Well I didn’t wanna write my record in New York. I don’t find New York a very
creative place. It’s difficult to be an artist there, you know? So I wrote my record in Mexico
because someone let me – Wow that is so fucking loud, this is crazy I can’t believe we’re talking
here.

Sean Carlin: That is the Arcade Fire party, right?

Empress Of: Is it? Namaste. Do you know what is EM café open? No it isn’t. We’re just gonna
do our best here. This is a fucking festival! We gotta deal with this bullshit, live music what is
that?! [laughs]

Sean Carlin: Speaking of challenges I guess – we’ll jump right into it. What were some of the
most challenging parts of the retreat? Were there days where you wanted to give up?

Empress Of: I would say one of the most difficult things about the thing was being alone and
just being comfortable with being yourself and being by yourself and spending a lot of time
alone is one: boring, and two: maddening, and three: daunting. If you’re not a very confident
person you discover that very quickly, you know? I’m talking about completely alone, where you
don’t have anyone to speak to for weeks. I didn’t have internet. So I’m literally just talking to
myself so I can use my vocal muscles, you know? So yeah I would say that’s the difficult part
about being in Mexico, writing your first record.

Sean Carlin: Was it difficult to get out of your comfort zone and be vulnerable when you started
making this record?

Empress Of: That was – oh my god are they done? Are they done? You know what we could
have done, we could have gone to Nouveau Palais, but thank you so much! I think Arcade Fire
is really hitting it off there. Yeah they’re going crazy over there!

Sean Carlin: What made you decide to do this record all on your own?

Sean Carlin: Especially with your first.

Empress Of: Yeah, especially with your first album because now I look back at the record and I’m
just like, ‘thank god, every decision on this record is my doing, and if something falls flat it’s my
responsibility, and at least it’s 100% me’. Sorry I’m amped right now, those drums they got me going!

Sean Carlin: What do you think it was about that place that allowed you to find yourself and
express your emotions so effortlessly?

Empress Of: About Mexico? I think I could have written this record anywhere. Maybe not New
York because all my friends were there to distract the shit out of me and ‘if you feel alone go
hang out with so and so at a bar. If you feel like you don’t want to finish this track go hear like
the greatest DJ in the world with like the best sound system’. Being alone in Mexico, I could
have been alone in like – I mean I finished part of the record in Montreal. I was here for a
month. Not writing but like editing and production stuff. I did a month in L.A. and a month in Montreal and then I did the rest in New York. I lived in an apartment in Montreal for a month, during the winter, so I never left my house. I just literally worked on this shit all the time. Yeah, I could have written this record anywhere. It’s not about Mexico, it’s just about being alone so that I can figure out what is wrong and what I need to fix about myself so I can put it through my music and I can perform it every night. Every night
I play that record I remember why I want to be an artist, even I’m playing to no one in the middle
of nowhere, which is very difficult, and humbling as an artist. Because even if you think of all the
fucking whatever, who gives you whatever, like four stars, best new grill, like whatever, best
new earrings it doesn’t matter but playing for 15 people and having one of them sing your songs
is like OK, you know? You get perspective on how your music impacts people. I’m going on a
fucking rant. Sorry, sorry!

Sean Carlin: Did you have a vision in mind going into the album and did you know that it was
going to turn out the way it did?

Empress Of: I didn’t know what kind of record I was going to make when I started making it.
The record sort of happens as I finish the songs and I was like ‘oh I wrote a record about me,
you know? Oh I’m dealing with all of these issues’ and now it’s not like ‘oh I want a write a
record about fuckin’ gender inequality or class inequality, or social inequality, or my ex-
boyfriend, that’s just what I happened to write about.

Sean Carlin: Making an album on your own has its benefits because there aren’t really any
compromises, but as you’ve mentioned that hardest part is knowing when to stop. Looking back
on the album now is there anything you would change about it?

Empress Of: I just did a piece with Yours Truly, about the making of my album and I went
through every single song, and the last song I finished is “To Get By” and me and my manager
were going back and forth non-stop about whether that track was done, because every other
track we decided we’re done. I was like dude I can’t fucking work on thirty seconds of a whole
record anymore, because he didn’t like this drum break and I was like dude I can’t do this
anymore, this isn’t the end all, be all, there’s another fucking record after this record, and
another one after this record and we were just being so nitpicky about it and at one point I was
like we’ve nitpicked everything on this record, we just have to accept. It’s been like ten months, I
worked on the production, writing and recording for ten months and I was like dude. I could work
on that track forever, like till this day I could work on that track and I actually did after I finished
my record, mixed and mastered it, someone was like yo, you should make a dance edit of “To
Get By” and I was like whoa, whoa, ugh, and my label was like we’ll press it to 12” and like
white label and we’ll make limited edition copies and I was like dude come on I just worked on
this track for like three months, like I’m gonna go crazy! But I did it anyway and I’m selling it
tonight, white label 12” edit of “To Get By”. Holler! [laughs]

Sean Carlin: Besides an album, what did you take away from the retreat?

Sean Carlin: What is your musical background and what made you decide to get into electronics?

Empress Of: My musical background is I grew up listening to salsa and merengue, lot of Latin
music when I was a kid and then I got into jazz and Bjork when I was thirteen, and then jazz led to
classical and I studied a lot of music as a kid thirteen to seventeen and then I got a laptop ‘cause I
was going to college and you needed a personal computer and I went to school to study jazz and
then I immediately switched to the engineering program ‘cause I just spent all my time not making
compositions and stuff and just making little beats.