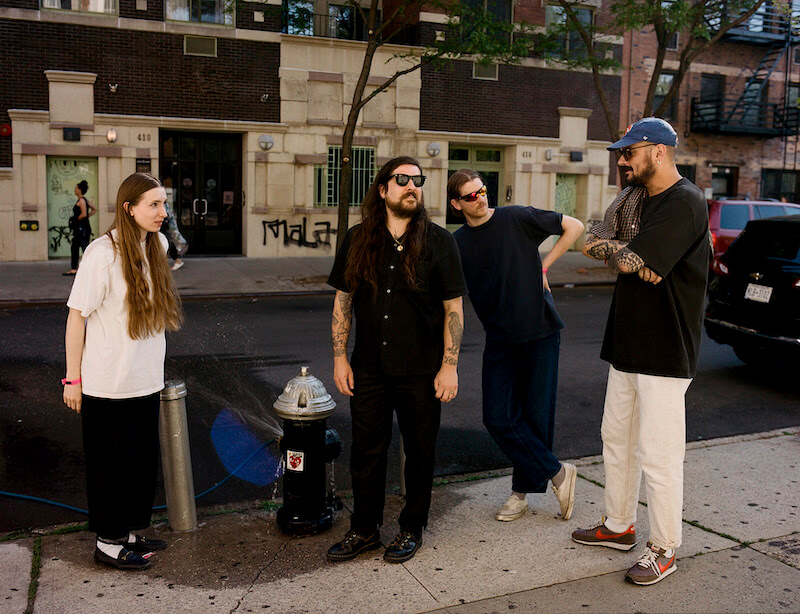 London-based post-punk outfit Dry Cleaning have released a new single, “Anna Calls From The Arctic,” off their highly-anticipated sophomore album, Stumpwork, out October 21st on 4AD. On “Anna Calls From The Arctic,” Florence Shaw narrates an off-kilter conversation with a distant friend. The track is whacked-out and otherworldly. “The lyrics were partly inspired by phone calls with a friend who was living and working in the Arctic,” explain the band. ”The song developed from a keyboard, bass and clarinet jam. This then took shape during our pre-recording sessions with John Parish and Joe Jones in Bristol and finalized at Rockfield studios a month later, with some musical inspiration coming from the dramatic scores of John Barry. The song is observational and sensual.” Today’s visualizer features the band’s drummer, Nick Buxton, displaying perfect form while skating backwards.

Having already started writing their second record before 2021’s acclaimed New Long Leg was released, they proposed to producer John Parish that they spend twice as much time on the follow-up. Listen to the album and you can feel that increased boldness – vocals which coil tightly around deft and complex riffs, great meshes of instrumental texture and the willingness to launch into full-on abstraction. It is a heady mix that is entirely Dry Cleaning’s own, distinguishing it from their contemporaries.

Shaw demonstrated increased spontaneity in the studio, improvising many of her lyrics straight on to the album. The lyrics are almost entirely observational. There is one quote from the artist Maggi Hambling on the woozy title track, text from an old Macintosh computer virus on “Don’t Press Me,” and snippets from the press cuttings library of archivist Edda Tasiemka scattered throughout, but the use of ‘found lyrics’ employed in the band’s early years is now far in the past. “I wrote about the things that preoccupied me over this period, like loss, masculinity, feminism, my mum, being separated from my partner for little stretches in the lockdown, lust,” she continues, preoccupations from which wider political and social commentary emerges. “I think if you make something observational, which I think I do, it’s political,” Shaw says. “There were two murders of women in London that were extensively covered on the news, and the specific details of one of those murders were reported on whilst we were at Rockfield. That coverage influenced some of my writing and my state of mind.” The band’s instrumentation, too, may well reflect our increasingly bleak socio-political landscape, the way it can pick up intense and urgent momentum, or zone out into icy detachment.