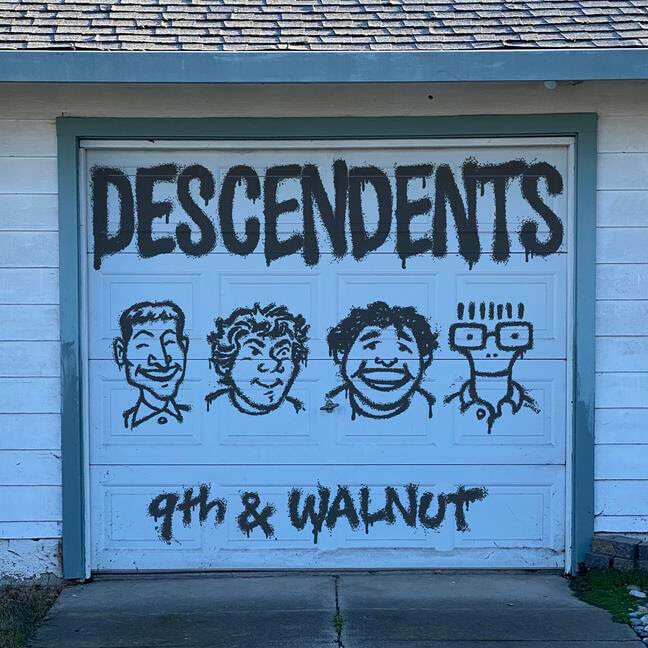 Even through the past few decades of first wave punk-celebrating legacy docs and unearthed demo box sets, some Holy Grails are more surprising than others. Take Descendents’ 9 th & Walnut, a record nearly 45 years in the making. Much of its 18 songs date all the way back to the California punk group’s formation in the late 1970s, back when founding members Frank Navetta (guitar) and Bill Stevenson (drums) were barely teenagers (bassist Tony Lombardo was in his mid ‘30s, mind you, but still…).

While they’d abandon much of the early songbook by the time vocalist Milo Aukerman joined the fold ahead of 1981’s raging Fat EP, the material was eventually tracked in 2002 by Stevenson, Lombardo, and the late Navetta—who would pass away in 2008 after falling into a diabetic coma. After sitting for nearly another two decades, Aukerman added vocals last year, using Navetta’s old vocal guides from the turn of the century session. On the outset, the lost songs of 9th & Walnut provide a thrilling, all-energy rewind that gives fans a chance to more fully understand the trajectory of one of punk’s most beloved bands.

Starting with the good: the music fully rips. Descendents have maintained altered line-ups since Navetta’s departure from the band after the release of their seminal debut album, Milo Goes to College, making 9th & Walnut the first full-length from the initial four-piece line-up since 1981. Despite the gap, the connection between the original members is kinetic, evidenced by opening punk pound-out “Sailor’s Choice,” which runs rampart-crashing guitar chords and Stevenson’s twitchy hi-hat handiwork alongside Aukerman’s instantly recognizable, melodious rasp. “Nightage” is arguably the most classic cut of the
bunch— a Lombardo-penned tune that begins with an ear-worm bass run before becoming a manic fist-raiser.

Between the punchy pace and Navetta’s gorgeously quick-shifting chord work on pieces like “Crepe Suzette,” “Like the Way I Know,” and “Baby Doncha Know,” Descendents definitely deliver a proto-Goes to College sound, but there are also some wild outliers to 9 th & Walnut. “I’m Shaky” delivers a looser, mid-tempo groove and a New Wave-styled call-and-response chorus; the album closes with a seemingly left-field, ultra-gleeful take on the Dave Clark Five’s “Glad All Over”. While the latter is a fun but ultimately inessential part of the canon, it’s also a nod to the tune apparently having kicked off Descendents’ first-ever set.

Though the music is generally on point, the lyrics are a mixed bag. Fit with a mock-vomit finale, “You Make Me Sick” works an early punk edginess that’s both juvenile and charming. Elsewhere, the paranoia-inducing bass spindling of “Grudge” backs a lean but perhaps profound look at sustained hate (”Grudge, it works like a gun/Shoot it at people to make them hurt”).

Descendents’ broader discography has included countless anthems for the lovelorn, and some of it hasn’t aged so well. That can be the case with 9 th & Walnut, too, as the dejected, punk-as-fuck nihilism of a teenager from the 1970s hits differently five decades later. Some of these songs are relatively tamewith their yearning, like the aforementioned “Nightage” (“She is playing with my heart/But that’s the way it goes”), though 9th & Walnut can definitely get ugly. Take the cryptic “Lullaby,” which could be taken as either a missive against, or the rallying cry of an outcast labeled a liar and a “whore” by society
(the song is a predecessor of sorts to the same kinds of claims lobbied on College’s more outwardly misogynist “Catalina”); “Ride the Wild,” a re-recorded version of a song from the band’s first 7-inch, is barely an entendre, and another screed about someone “[running] around with a thousand other guys.” On the surface, “Baby Doncha Know” is about two people growing apart, with lyricist Navetta brutally dressing down someone he “cannot recognize.”

“A lot of Frank’s music, especially during that period, was kind of steeped in bitter resentment,” Aukerman recently explained to Rolling Stone, “I think at the time my 19-year-old self was kind of like, ‘Oh, this is punk,’ and I really liked it for the fact that it was just so in-your-face, but looking back, I go, ‘Wow, that guy was pretty bitter about stuff.’”

So, yes, there are some uncomfortable stretches across 9 th & Walnut, just as there are on other Descendents albums. Coming from the perspective of a 15-year-old kid in the ‘70s, that negativity may make some sense. There is, however, something paradoxically both commendable and questionable about Aukerman preserving those feelings as-is when he, himself, is pushing 60. All told, it makes for an unflinching, honest look back at Descendents’ early days.

It’s undoubtedly exciting to hold up the Holy Grail—to feel the weight of its legacy; to marvel at its craftsmanship—but artifacts don’t often come up in perfect condition. But even while parts of 9th & Walnut still pang with the more complicated aspects of Descendents’ history, hearing these lost songs is nevertheless a triumph in and of itself.