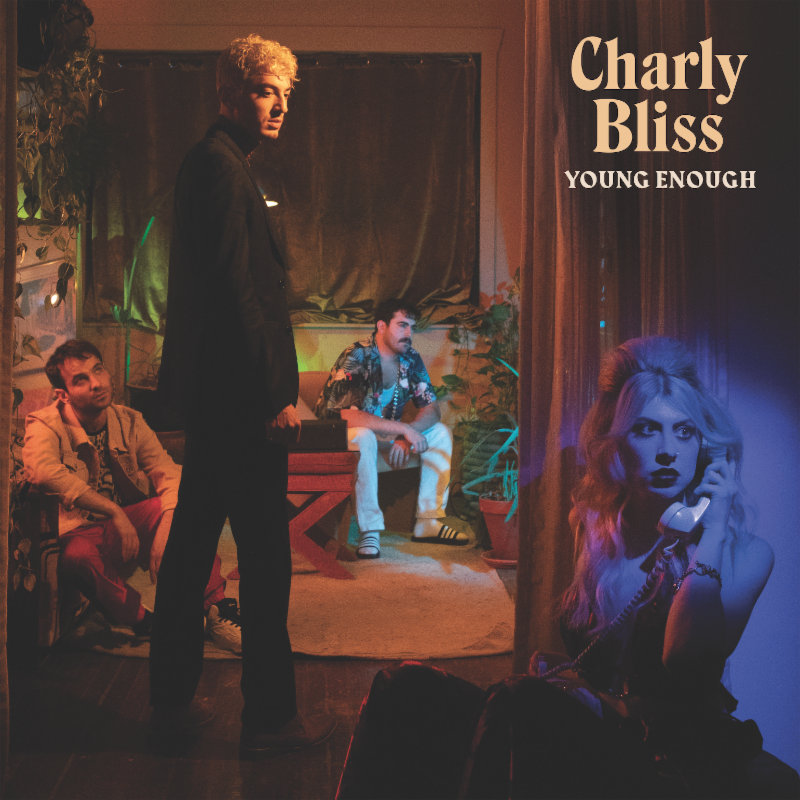 Charly Bliss have announced their new album, Young Enough, with a video for its lead single “Capacity.” Video director Michelle Zauner of Japanese Breakfast, says: “It was such a blast getting to work with Charly Bliss. Charly Bliss has always made great narrative music videos, so I wanted to stay in line with that tradition and take advantage of working with a band that are all such great, funny actors individually. I was watching a lot of heist movies at the time, and I thought a sort of post-heist fall out between friends was the perfect setting for this song about reaching your limit with someone. Eva had an amazing mood board she brought to the table with references to Paris, Texas, Five Easy Pieces and Badlands so it was important for us to showcase a warm, 70s color palette. Per usual, I worked with Adam Kolodny as our DP and my creative collaborator.”

From Eva Hendricks: “It was a dream come true to work with Adam and Michelle on this video. ‘Capacity’ is a song about wanting to kill your inner people-pleaser, and Michelle beautifully presented a parallel concept, which warns of the perils of getting swept up in other people’s bullshit.”

“I don’t know why it’s easiest for me to frame the darkest lyrics in the context of upbeat songs,” says Charly Bliss’ Eva Hendricks. “It’s completely instinctual and not something I ever plan out. It sort of mirrors how I am, and maybe it’s a way of protecting myself. In my opinion, the two best emotional releases are crying and dancing, so it makes sense to me to marry the two.”

That combination is the core of Charly Bliss who, on this record, embraced both sides of that equation more than ever before. Challenging each other to be exposed, to be seen for who they really are as people, and then to double down on the sound that emerged from that process is the story of the band’s evolution from the scrappy upstarts who made 2017’s brash punk LP Guppy, to the confident, assured artists behind the comparatively dynamic, unapologetically pop Young Enough. “We definitely go to different places on this one,” says bassist Dan Shure. “But it still sounds like us. It’s still fun.” As they started writing, they tapped into their mutual love of pop music. “You know, bangers? Songs that just stick with you for a really long time,” Dan says. In particular, the expansive but gritty title track and the synth-driven, emotive song “Chatroom” served as key points of reference for the overall direction of the album.

For Eva, the path to these moments of exaltation was fraught. Many of the singer’s Young Enough lyrics were inspired by a past abusive relationship, one that had Eva – as such relationships are designed to do – doubting herself on many levels. Songwriting, which “wasn’t something that I grew up thinking I could do,” as she puts it, became a new source of respite, and, eventually, of redemption. “You go through experiences of loss or extreme pain and you just keep moving,” Eva says. “You look around and wonder, how has the world not stopped? But it’s also powerful. I’m still here, I’m not a person who is ruled by pain, I still like who I am.” If the singer had any lingering doubts about her craft, they’re gone now. “For a long time I understood my ability to write songs as like, OMG another one just fell from the sky what luck – another one will never come again!” Eva says. “Now I know, I’m meant to be doing this. And I accept and honor that.”

Exposing oneself emotionally, even to close friends and creative collaborators, is never easy — especially when one of those people is your brother. Growing up in Connecticut, it was their parents’ “wildest dream,” as Eva puts it, that she and Sam, the band’s drummer, would wind up playing in a band together, so of course they avoided it for as long as possible. The Charly Bliss origin story begins instead at performing arts summer camp, where guitarist Spencer Fox first met Dan. Eva and Dan also knew each other through musical theater; they did shows together as pre-teens. “We are super hardcore,” jokes Spencer.

It was Spencer who first saw in Eva the possessed energy the bands’ fans are so drawn to, this tornado of joy and rage and celebratory sorrow spinning out to mesmerizing effect on stage night after night. “It was just there,” he says. “It was obvious.” He eventually asked Eva out of the blue if she’d been writing songs, which shocked her a little; dudes didn’t usually care. “I would always ask the guys at my high school who played music if we could start a band or write or do something together, but they pretty much ignored me,” she remembers. “But Spencer totally encouraged me.” Before long, the pair was writing together, and they called on Eva’s big brother to join on drums. “It was kind of like, oh why didn’t we do this a long time ago,” Sam says.

By 2014 Charly Bliss was a fully formed band, living in New York, working the standard barista/bartender circuit by day, rehearsing by night. They recorded and released their debut EP, Soft Serve, and played lots and lots (and lots) of shows. There was a purity to those years. “I loved it,” remembers Eva. “I really loved working in a coffee shop. I’d write songs while I was putting away milk.” After they released Guppy through Barsuk Records in 2017, time spent out on the road increased, as did the Charly Bliss fanbase. But the essence of the band’s sound, two and a half minute torrents of blissfully tight chaos that blew the roof off the place, (not to mention the band members’ lifestyles) didn’t change much. When it came time to record a follow up, that’s when things shifted. They all quit their jobs to focus full time on music and challenged each other to write as many songs as possible. Sam and Eva collaborated more closely than ever and found a prolific songwriting rhythm. After penning 20+ songs, they solicited the input of producer Joe Chiccarelli (the Shins, the White Stripes), who won their hearts immediately. “He just got us,” says Eva. For Chiccarelli, the “infectiousness” he was initially drawn to when he heard the band play live in early 2017, was more apparent than ever. “There is a high level of energy in the vocal delivery, there is a sophistication and musicality in the guitar parts, the rhythm section just works, the parts are simple but they come alive,” he says. “It’s all the elements that make a great band.”

The first five or six songs they wrote, felt good but a little too familiar, like Guppy 2.0. Then things started to open up. “Chatroom” and “Young Enough” were linchpins, as was the soaring, mini epic, “Fighting In the Dark.” The delicate synth confessional “Hurt Me” also felt, as Eva puts it, “like something we hadn’t explored yet.” The entire record sounds like a newly explored realm, from the deceptively easeful confessional “Capacity” to the propulsive, more classic pop of “Hard To Believe.” In the end, Young Enough feels joyful and celebratory, but also infused with a new sense of depth and maturity. “I want people to feel strong when they listen to this record,” says Eva. “Like you’re working through some shit but you feel really strong and beautiful, even if you’re in a lot of pain. That’s what I want people to feel. The opposite of broken.”