Buzzard Buzzard Buzzard have today shared “Break Right In” — a new track taken from their debut album Backhand Deals, which will be released on February 25, 2022 via Missing Piece Records/Communion. The video for “Break Right In” is the first part of a two-part film, and is the band’s second collaboration with director Will Clark – who also directed the Sunny Delight-inspired video for “You.” Speaking about the video, vocalist and guitarist Tom Rees says: “Nothing quite illuminates the unjust society we live in, riddled with bad actors and nefarious despots seeking to limit our freedoms and starve us economically, like four young men playing dress up in a massive mansion. All joking aside, Will Clark is a genius.” “Break Right In” follows the previous tracks “Yourself,” “You,” “Crescent Man vs Demolition Dan” and “New Age Millennial Magic.”

“With the record we’re really obsessed with denying our traditional influences by overwhelming the music with contemporary references so we don’t sound like your dad’s cover band who are really good when they don’t overdo the Guinness and the lead singer remembers his lyric sheet,” says Rees. “We know deep down we love ‘70s music too much to just abandon it in pursuit of being considered relevant, so it seems like the right thing to do to use modern recording techniques and contemporary references to make something inherently new.”

“The record allowed us to discuss the thoughts we have about our lives, the lives of people from Cardiff, the lives of people from Wales, and the lives of people from everywhere whilst openly admitting that we know nothing and we’re just part-time-opinion-havers. The longer we’re a band, I realise that all we ever want to do is effect change in people’s lives and to do that disingenuously would make me feel slimy. So let’s do it honestly in any way possible. Rock isn’t dead, it doesn’t need ‘resurrecting’ or ‘regurgitating’; it needs acknowledging for what it is, and it’s everywhere. If we should ever be considered a band that is ‘bringing rock music back’ I think I would shed a tear — rock should be moving forwards, not backwards.” 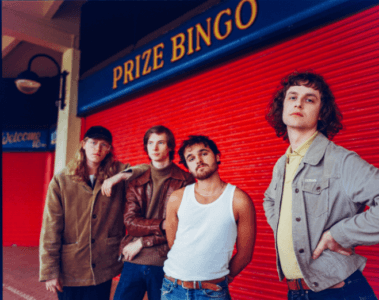