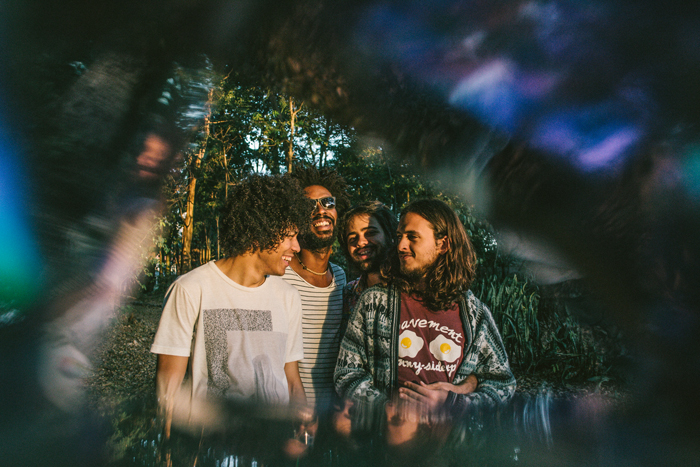 Boogarins have released a new video for “6000 Dias.” The video was directed by Cléver Cardoso and Boogarins and was edited with footage from their first international tour. “We were on tour from March until September (stopping for three weeks in June for the recording of Manual) and we thought the footage fit well with the lyrics,” explain Boogarins. They go on to say, “the lyrics of ‘6000 Dias’ talks about the passage of young and adult life in a very lyrical way, comparing what is important to ‘us’ to what is important to ‘them’ – the song feels like a mantra for us.” Boogarins are currently on an international tour.

Fernando “Dino” Almeida and Benke Ferraz began playing music together as teenagers in the central Brazilian city of Goiânia– recording psychedelic pop in their parents’ gardens, filtering their country’s rich musical history through a very modern lens. The group’s debut LP, As Plantas Que Curam, was a decidedly lo-fi home recording pieced together in isolation, before the pair had recruited a proper rhythm section or played a single gig. By the time the album was released in late 2013 on Other Music Recording Co. Back home, where most young groups sing in English like the popular American and British indie bands everyone listens to, Boogarins spoke directly to their Brazilian audience – literally and figuratively – with their Portuguese-sung rock and roll rooted in the traditions of Tropicalismo but nurtured in contemporary global music culture.

In the midst of their 2014 European spring tour, Boogarins made a two-week detour to Jorge Explosion’s Estudio Circo Perrotti in Gijón, Spain, where they laid down a bulk of the tracking for what was to become Manual. Recorded to tape, the sessions caught a thrilling live band in peak form after months on the road. The group then took the recordings back to Brazil, and for several months, between regular concert dates around South America, they completed the album in Benke’s home studio, adding two new songs and layers of sound and overdubs that tied the new full-band recordings to the feel of their debut.

In yet another country greatly divided by class, where incredible wealth, conspicuous consumption and global business culture butt up against favelas and brutal poverty, the 2014 Brazil World Cup brought huge and much-needed infrastructure investment with it. Instead of uplifting the local communities, entire neighborhoods were pushed aside as huge developments and glassy hotels went up on beaches and in areas long-established as working-class economic and social hubs, with many losing their homes or businesses. Like millions of Brazilians including their own family and friends affected by this snowballing inequality, it deeply resonated with Boogarins, and it’s reflected throughout the new record.

Manual has the same dual meanings in Portuguese and English: “to work with your hands” and “an instruction book.” With the full title being Manual, ou guia livre de dissolução dos sonhos (Manual, or free guide to the dissolution of dreams), the album should more so be viewed as a sort of diary or dream journal. The artwork, by artist Nei Caetano da Silva (taken from a sketchbook in which he used to draw with his children), perfectly represents the mood of the music: deeply personal, emotional, free-flowing and in the moment, tying together thoughts and dreams.