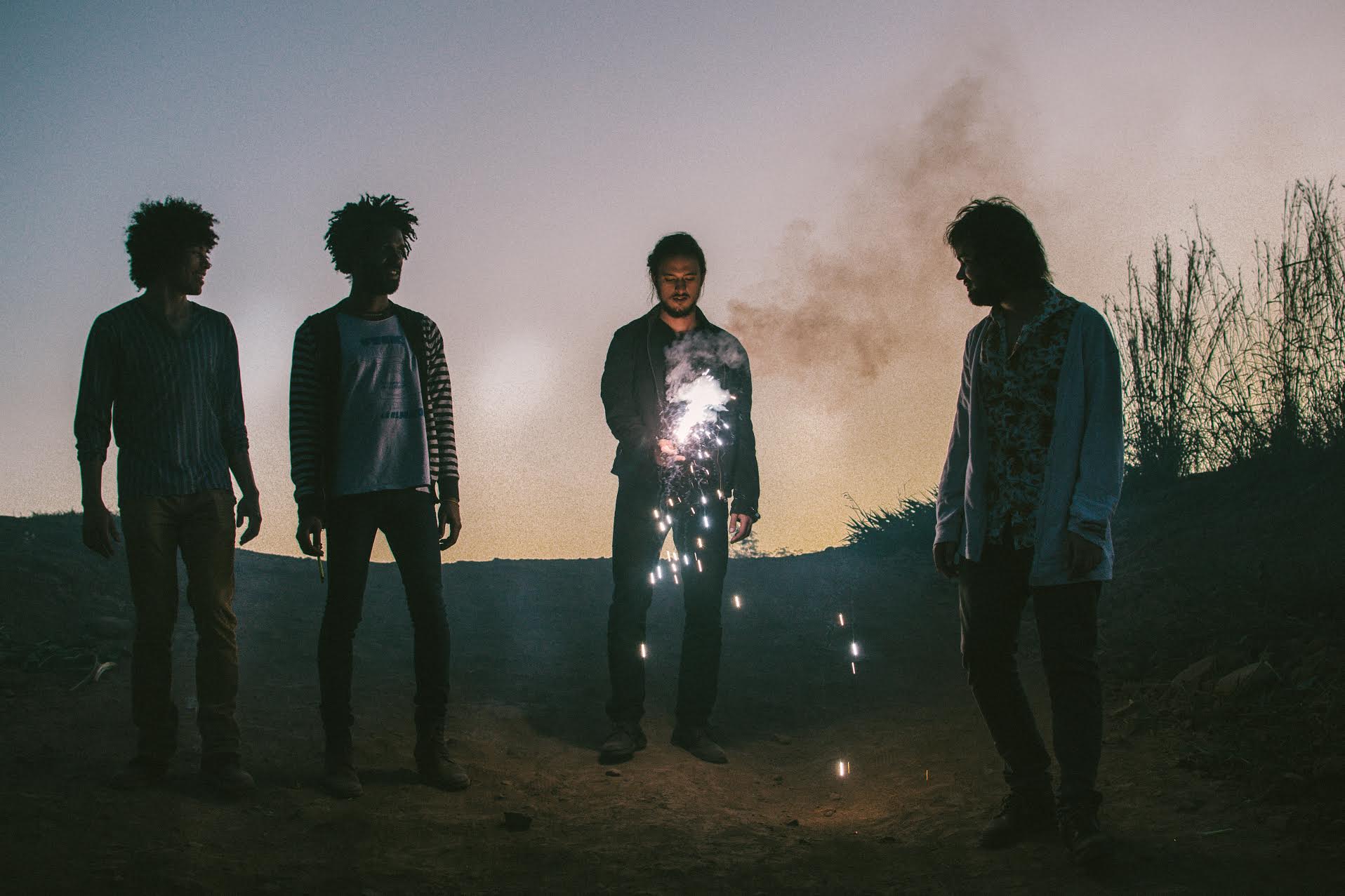 The Brazilian quartet, Boogarins, composed of Dinho Almeida (vocals, rhythm guitar), Benke Ferraz (solo guitar), Raphael Vaz (bass), and Ynaiã Benthroldo (drums), are sure on a roll! Having just released their sophomore record, Manual ou Guia Livre de Dissolução dos Sonhos, the band is ready to take over the US for Primavera, and Canada for Leviation in the coming months, after touring around Brazil. Despite some glitches at the hands of modern technology, I was able to talk to the band about their latest effort, and how it has brought them together, more than ever before.

Northern Transmissions: Hey how’s it going? Are you at home right now?

Northern Transmissions: First off, I just wanted to say congratulations in on your sophomore record. How has it been received?

Boogarins: We kind of already had a good reception about the first album, and because of the whole buzz around the band, people were already listening to it you know? This second album for me is more of a linear album, compared to the first. I guess that is a good step for our way to sound, you know?

Northern Transmissions: Have you gotten a lot of international press as well?

Boogarins: Yeah, it’s coming. The album was released in New York Times. In Brazil a lot of people talked about it but Brazil is not really mainstream or really big. It’s well known by the people who listen to alternative music, not something that plays on the radio or television. Outside Brazil I think the reception was really cool too. The concerts in Portugal were really great, in Spain…now were going on a US tour, playing for the first time in Canada too.

Northern Transmissions: You’re playing in Austin, and at the Levitation in Vancouver?

Boogarins: Yeah, I think that’s the first confirmed concert there. Probably were going to do some more, I don’t know. The one we just announced was Levitation, cause we’re playing Austin, and then Vancouver too.

Northern Transmissions: I was going to ask about the process of writing and recording the album. What was it like?

Boogarins: The second album was more of a live album. We were in the middle of a big tour in Europe and then we stopped in Spain for three weeks and recorded most of the basics on the record and mixed some stuff too. In this case the right process comes more from like some acoustic songs by our lead singer Dinho, and then we played as a band and everyone arranged some parts with their own instruments. The second album was more close to that; songs that come from something a guitar and vocals, and then Raphael creates his bassline, the drums are created. So it’s really a live way of writing? The album was recorded live as well.

Northern Transmissions: Yeah and I know your debut album consisted of a lo-fi approach, what made you decide to depart from that sound on your latest album?

Boogarins: I think as we were doing a lot of concerts on our first tour, and playing a lot, and we never had the opportunity before to record something live, with a good sound you know? I don’t know I think it was a natural thing. We didn’t think about the aesthetic. It was just the way we could record and like what we were recording. Every time we went to the studio before the stuff didn’t sound like we wanted it to. It seems like it was just natural. Even after the recording process we even asked ourselves – that’s the kind of album we want to record, because it was pretty much a live album. Everything was recorded on tape, with a lot of old instruments, amplifiers and effects. It just seemed like the right thing to do [laughs], the time to record a live album?

Northern Transmissions: Did you have some sort of vision before hand that it would turn out like that?

Boogarins: Not even close, but I think we learned to enjoy it. Because, I mean, we recorded it in the middle of 2014, and the album was only released last October, so it was like one year, and two or three months later. At one time during this whole process, in these fourteen months, I was convinced that we wouldn’t release that. We can’t remix it, stuff like this, but after some point we changed it and everybody started to love it [laughs].

Northern Transmissions: Would you say that was one of the biggest challenges in the process of the album?

Boogarins: The challenge was really in creating the sound because we recorded everything live and tried to mix everything live too using older studio equipment. It was about songs that we were playing for like six months in a row, touring, you know? We were already addicted to a kind of sound of it, more soft, quiet because everything was recorded on tape. Everything sounded kind of distant, not as much as we were used to. We wanted it to sound more modern, more compressed. After some point we thought that it didn’t make sense to try to sound, just like that. We had to have something special about it. Some of the songs that we wrote in studio, when we wrote the songs in the studio everything just started to connect, you know? The stuff we were playing a lot before the studio, the sound of it wasn’t appropriate, but in the end we did find a way of including it. Most of the songs we wrote in the studio, we just left them as is, to have that vibe. We were writing our parts and listening to the equipment, and thinking about how it sounded. We started caring about the songs we had just written in the studio, as much as the ones we wrote before – they were maybe more cool then the others [laughs].

Northern Transmissions: Were there any main influences you drew from on this record?

Boogarins: Here I’ll give you Dinho. Well, I mean, at that time we were listening to so many things, and while touring we were watching so many concerts so it’s hard to talk about one main influence. We are on tour in the van so you’re listening to like so many albums for three days and every time you listen, it’s something new. When we recorded the second album, we were more into the band, and our friendship, and our concerts – I mean we did like 60 concerts, and after we went to record. So we are very into the band. I think the main references are ourselves, what we listen to in the van, and what we talk about.

Northern Transmissions: To expand on that, how do you find the music scene in Brazil has influenced your music?

Boogarins: I mean it’s more the way we do things, then the sound of things.

Northern Transmissions: Finally, I just wanted to finish up the interview with by getting to know your plans for the rest of the year? I know you guys are playing some big shows, do you have any other plans to write music?

Boogarins: Yeah, we might record something new, we have a lot of new songs, because like Benke said the second album was record over a year ago. So our plan is to play as many concerts as we can, and record as many songs as we can.