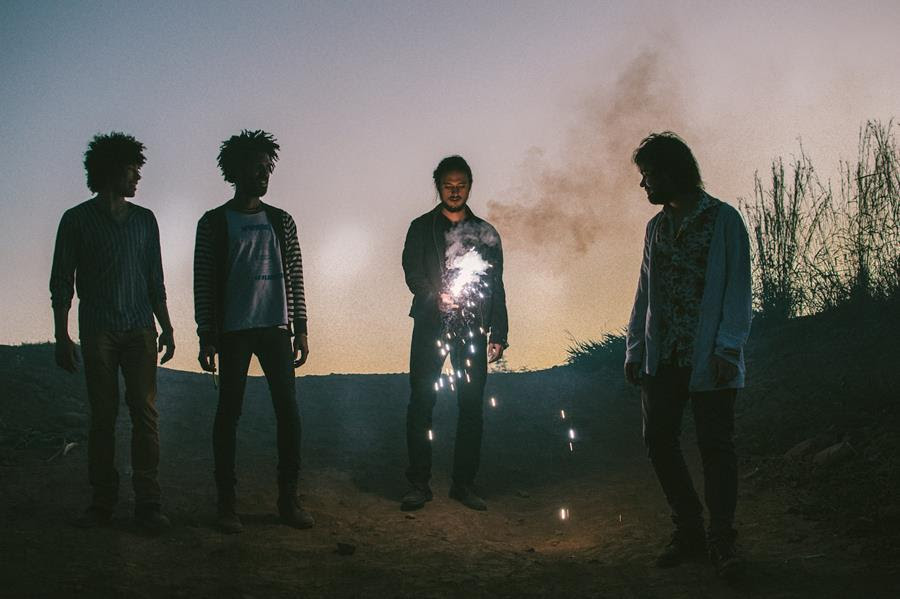 Boogarins previously released “Avalanche,” the first single from their forthcoming sophomore album, Manual. Now, you can hear the new track “6000 Dias”. Around the release of Manual, out October 30 worldwide, Boogarins will be heading out on an international tour (full dates listed below).

Fernando “Dino” Almeida and Benke Ferraz began playing music together as teenagers in the central Brazilian city of Goiânia– recording psychedelic pop in their parents’ gardens, filtering their country’s rich musical history through a very modern lens. The group’s debut LP, As Plantas Que Curam, was a decidedly lo-fi home recording pieced together in isolation, before the pair had recruited a proper rhythm section or played a single gig. By the time the album was released in late 2013 on Other Music Recording Co., Boogarins were already developing a name around Goiânia, and soon after, the now-expanded band was booking regular gigs in São Paulo and across the country. The last two years have seen Boogarins on the road continually – they toured internationally for nearly six months behind their debut, playing American and European festivals from Austin Psych Fest to Burgerama to Primavera, and headlining clubs from London to Paris to Barcelona to New York, performing alongside many great artists around the world.

Back home, where most young groups sing in English like the popular American and British indie bands everyone listens to, Boogarins spoke directly to their Brazilian audience – literally and figuratively – with their Portuguese-sung rock and roll rooted in the traditions of Tropicalismo but nurtured in contemporary global music culture. Without any proper label support or PR in their own homeland, As Plantas Que Curam crossed into broader consciousness in Brazil, topping many fan and critic lists, with the group dubbed ‘Best New Artist’ in mainstream outlets like Rolling Stone Brazil and on powerhouse GloboTV’s annual music awards show, and becoming a major live draw across the country.

In the midst of their 2014 European spring tour, Boogarins made a two-week detour to Jorge Explosion’s Estudio Circo Perrotti in Gijón, Spain, where they laid down a bulk of the tracking for what was to become Manual. Recorded to tape, the sessions caught a thrilling live band in peak form after months on the road. The group then took the recordings back to Brazil, and for several months, between regular concert dates around South America, they completed the album in Benke’s home studio, adding two new songs and layers of sound and overdubs that tied the new full-band recordings to the feel of their beloved debut. While the resulting new album is undeniably Boogarins, Manual veers into far more complex musical territory, propelled by Dino and Benke’s dense, two-guitar interplay and an abundance of deep rhythms. As well, the songwriting here is more personal and socially conscious than their debut, all the while we find the band broadening their collective vision.

In yet another country greatly divided by class, where incredible wealth, conspicuous consumption and global business culture butt up against favelas and brutal poverty, the 2014 Brazil World Cup brought huge and much-needed infrastructure investment with it. Instead of uplifting the local communities, entire neighborhoods were pushed aside as huge developments and glassy hotels went up on beaches and in areas long-established as working-class economic and social hubs, with many losing their homes or businesses. Like millions of Brazilians including their own family and friends affected by this snowballing inequality, it deeply resonated with Boogarins, and it’s reflected throughout the new record. During album-opener “Avalanche,” Dino wishes his lone voice could shake down mountains and crush the politics of greed, singing, “My cries have the strength to knock down all of the buildings/they will not let me see the sun.”
Manual has the same dual meanings in Portuguese and English: “to work with your hands” and “an instruction book.” With the full title being Manual, ou guia livre de dissolução dos sonhos (Manual, or free guide to the dissolution of dreams), the album should more so be viewed as a sort of diary or dream journal. The artwork, by artist Nei Caetano da Silva (taken from a sketchbook in which he used to draw with his children), perfectly represents the mood of the music: deeply personal, emotional, free-flowing and in the moment, tying together thoughts and dreams. Reflecting on Boogarins’ epic journey over the last few years, during album centerpiece “Falsa Folha de Rosto” Dino sings, “viver virou sonhar” (living became dreaming). Yes, Boogarins’ new LP does indeed offer a free ride to the dissolution of your dreams.