Things haven’t been the easiest for Billy Moon. Coming back from his first East Coast tour, he found himself in a hospital in rural Quebec when their car flipped twice after getting hit by a truck. By some Satanic miracle, everyone walked away unharmed, but there was still the nagging doubt that this was the end of music for Moon. Thankfully, one year later he’s come back with a his debut LP and an energetic live show that’s sure to make you realize that we’re all going to die but hey, maybe that’s ok.

Billy Moon will release his debut LP, Punk Songs, on September 14th via Old Flame Records. This album was recorded mainly by Dave Minehan (Replacements touring guitarist), production by Asher Gould (Beliefs), and mastered by Phil Bova (Bahamas, Zeus) He recently announced the release with a double single, the “White Shoes” b/w “Dingus.” This week he shared a second taste of the record, along with a video for “DWTBA.”

Having grown up outside of a bed-and-breakfast town in Ontario — where he “wasn’t even the weirdest kid, but always felt like it” — many of the tracks on Moon’s new album were inspired by his adolescent years navigating small-town Canada. A self-proclaimed music nerd, he relied on one of the more powerful radio stations in Ontario to deliver the sounds of Weezer, The Ramones, and The Velvet Underground to his tiny rural bedroom. Eventually, he moved to Hamilton and began recording a string of singles and EPs, which he supported with cross-country tours.

Moon’s live show — which he’ll bring to the US this fall — is proof of his dynamic songwriting, electric on-stage energy, and unique voice. 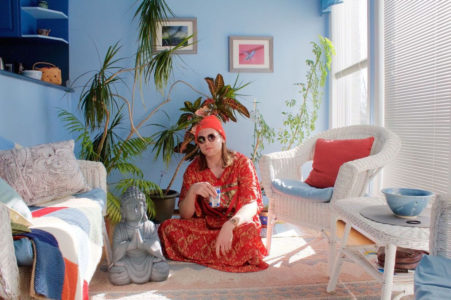