Following the release of the first four installments of Black Anything, IS TROPICAL released, Believe/What You Want via the band’s label NYC based Axis Mundi Records last March.

IS TROPICAL have now shared the video for “Believe”. As the band told Wonderland Magazine: “’Believe’ is all about the inner struggle of losing your faith and realising everything you were once taught was a lie. I was reading an article about how people are affected by natural disasters. During the Nepal earthquake locals were talking about watching religious temples and shrines fall around them, killing loved ones and as a result lost all their religious beliefs, ‘I don’t need it anymore, I can’t feel it anymore’.

With the video we created shots that mirrored the artwork for the album that David Abrahams and Christian Ashton had previously made. We wanted the video to have the same uneasy, restless feel as the song that could visual convey an inner struggle.”

IS TROPICAL have just returned home from a tour that has taken them around Europe, the US, a stop in the Moroccan desert to film the video for Follow the Sun, Lebanon and Turkey and more recently Ukraine and Latvia. They return to London on October 15th.

IS TROPICAL released their third album Black Anything in March. Originally formed in 2009 as a trio- Dominic Apa, Gary Barber and Simon Milner- the band has now added vocalist Kirstie Fleck, who was featured on the 2013 track “Dancing Anymore.” Working alongside producer and collaborator Luke Smith (Foals, Depeche Mode), IS TROPICAL set out in the summer of 2014 to record across five continents; North America, Africa, Europe, Asia and South America.

The result, Black Anything, was released in five 10” transparent picture disc installments, containing 2 tracks per vinyl. The artwork is a visual representation of both the recording process and the release with each 10 vinyl displaying the continent in which the tracks were recorded. The five vinyls when displayed on top of each other create the globe, unifying the concept as a whole with each vinyl existing as an art work and tribute to the continent it was recorded in. The band started the project in North America, building a studio during the label’s foundation in Brooklyn. 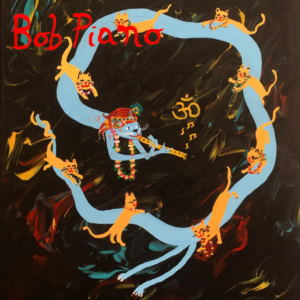