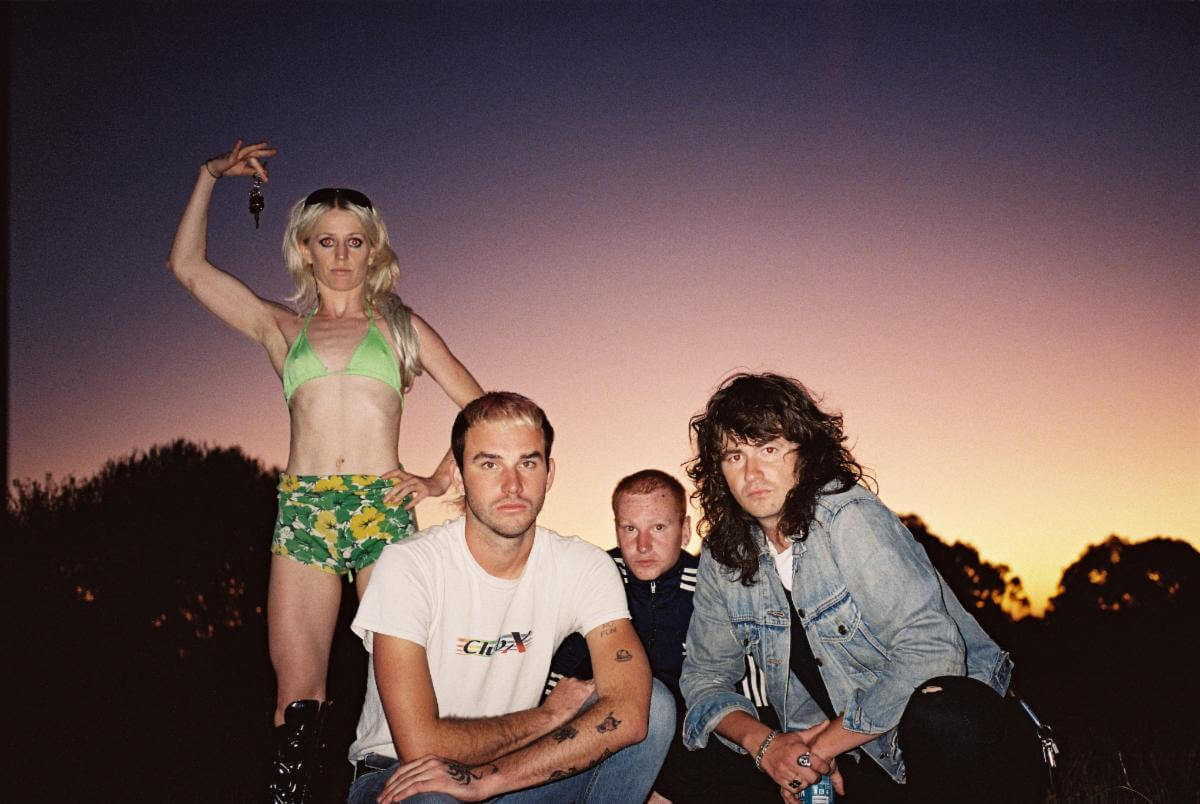 Amyl and the Sniffers release their new single “Security,” the latest offering from their forthcoming second album Comfort To Me, due out September 10 on ATO Records. Comfort To Me, which was mixed by Nick Launay (Nick Cave, IDLES, Yeah Yeah Yeahs). The Album includes the previously released single “Guided By Angels.”

​​​​Amyl and the Sniffers are Amy Taylor (vocals), Dec Martens (guitar), Gus Romer (bass) and Bryce Wilson (drums). Formed in a Melbourne share house in 2016, the Sniffers wrote, recorded and uploaded their first EP, Giddy Up, in the space of 12 hours. They followed with the Big Attraction EP in 2017, which featured the whip smart and iconic track I’m Not A Loser, the punching oi punk of Westgate and the pugnacious violence of Mole (Sniff Sniff). These early EPs had a grab bag of influences, from Australian rock to rap to 70s punk.

A statement by Amy Taylor on Comfort to Me:

All four of us spent most of 2020 enclosed by pandemic authority in a 3-bedroom rental in our home city of Melbourne, Australia. We’re like a family: we love each other and feel nothing at the same time. We had just come off two years of touring, being stuck in a van together eight hours a day, and then we’re trapped together for months in this house with sick green walls. It sucked but it was also nice. We spent heaps of time in the backyard listening to music, thrashing around in shorts, eating hot chips. The boys had a hard time being away from the pub and their mates, but it meant we had a lot of time to work on this record. Most of the songs were really intuitive. Main thing, we just wanted it to be us.

In the small windows we had in between lockdowns, we went to our rehearsal space, which is a storage locker down the road at National Storage Northcote. We punched all the songs into shape at Nasho and for the first time ever we wrote more songs than we needed. We had the luxury of cutting out the songs that were shit and focusing on the ones we loved. We were all better musicians, as well, because that’s what happens when you go on tour for two years, you get really good at playing. We were a better band and we had heaps of songs, so we were just different. The nihilistic, live in the moment, positivity and panel beater rock-meets-shed show punk was still there, but it was better. The whole thing was less spontaneous and more darkly considered.

The lyrics I wrote for the album are better too, I think. The amount of time and thought I put into the lyrics for this album is completely different from the EPs, and even the first record. Half of the lyrics were written during the Australian Bushfire season, when we were already wearing masks to protect ourselves from the smoke in the air. And then when the pandemic hit, our options were the same as everyone: go find a day job and work in intense conditions or sit at home and drown in introspection. I fell into the latter category. I had all this energy inside of me and nowhere to put it, because I couldn’t perform, and it had a hectic effect on my brain. My brain evolved and warped and my way of thinking about the world completely changed.

Having to deal with a lot of authority during 2020 and realising my lack of power made me feel both more self destructive and more self disciplined, more nihilistic and more depressed and more resentful, which ultimately fuelled me with a kind of relentless motivation. I became a temporary monster. I partied more, but I also exercised heaps, read books and ate veggies. I was like an egg going into boiling water when this started, gooey and weak but with a hard surface. I came out even harder. I’m still soft on the inside, but in a different way.

All of this time, I was working on the lyrics. I pushed myself heaps and heaps, because there were things that I needed to say. The lyrics draw a lot from rap phrasing, because that’s what I’m into. I just wanted to be a weird bitch and celebrate how weird life and humans are. The whole thing is a fight between by my desire to evolve and the fact that somehow I always end up sounding like a dumb cunt.

So anyway, that’s where this album comes from. People will use other bands as a sonic reference to make it more digestible and journalists will make it seem more pretentious and considered than it really is, but in the end this album is just us — raw self expression, defiant energy, unapologetic vulnerability. It was written by four self-taught musicians who are all just trying to get by and have a good time.

If you have to explain what this record is like, I reckon it’s like watching an episode of The Nanny but the setting is an Australian car show and the Nanny cares about social issues and she’s read a couple of books, and Mr Sheffield is drinking beer in the sun. It’s a Mitsubishi Lancer going slightly over the speed limit in a school zone. It’s realising how good it is to wear track pants in bed. It’s having someone who wants to cook you dinner when you’re really shattered. It’s me shadow-boxing on stage, covered in sweat, instead of sitting quietly in the corner.

Amyl and the Sniffers
Comfort To Me
ATO Records