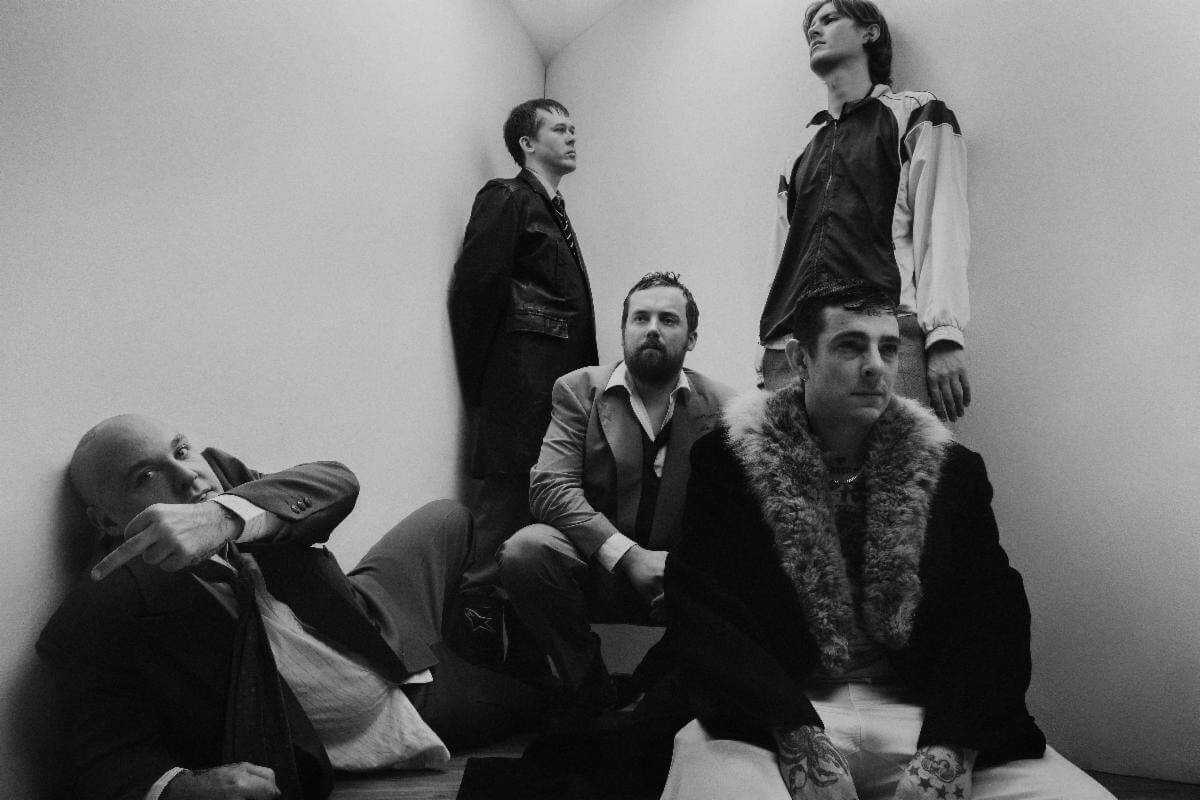 It’s easy to peg Swedish septet Viagra Boys as a novelty act. Their pulse-pounding, sax-driven punk songs are rife with absurd lyrics about lurid characters at their lowest – bottomed out speed freaks, adulterers busted by their spouse. That’s not to mention singer Sebastian Murphy’s recurring fixation on dogs, chickens, and shrimp. Flitting between a cold deadpan and maniacal nihilism, he gives off an ironic air, even though he mostly improvises his words based on personal experience.

But on Viagra Boys’ followup, Welfare Jazz, Murphy sings with explicit sincerity. He’s cleaned up his life. He’s kicked his speed addiction and taken up exercising, even though they lampooned fitness on their most beloved song, the sardonic “Sports.” Murphy is done with partying and apologetic about having been an asshole in the past. Though Viagra Boys have taken on a more serious tone, Welfare Jazz still contains plenty of humour. Hear the band’s first cover and collaboration, a take on John Prine’s cheeky “In Spite of Myself” with Amy Taylor of Australian rock band Amyl and the Sniffers. And the album’s title comes from the term “welfare jazz people,” how Murphy and his friends jokingly refer to free jazz musicians in Stockholm who rely on financial assistance from the government because their gigs don’t pay.

I spoke with Viagra Boys drummer Tor Sjödén over Zoom while he cooked dinner for his family. The day after our chat, he, his wife, and their three-year-old daughter expected to welcome a new baby boy into their lives. Talk of Sjödén’s family, as his dinner prep crackled in the background, launched us into a conversation about “To the Country,” a song whose narrator yearns to live a quiet, rural, party-free life with his girlfriend and dogs.

Northern Transmissions: When I first listened to “To the Country,” I thought it would have been a perfect way to end Welfare Jazz. But the more I listened to the John Prine cover, “In Spite of Ourselves,” the more I thought that was the perfect closer, because the song captures every aspect of the album: it’s sad, silly, raunchy, sincere, non-conformist, and a little bit optimistic. Was there any debate about which song would go last? Is song sequencing something the entire band decides?

Tor Sjödén: I was always for having the cover as the last track and ending the album really, really strong. But there was some debate. We’re six people in the band. There are a lot of decisions, and sometimes we let our management make some decisions. The older I get, I tend to not care so much, because I trust the people I work with. It feels good to step back a bit and let other people decide. I think that’s very healthy. Trying to decide every little detail is so frustrating. No one cares in the end.

NT: Speaking of country, it’s just one of the genres the band dips into on the new album, along with disco and straight-up jazz. A lot of people are surprised by the band branching out into these styles. Are you tired of people being surprised musicians like a wide variety of genres outside of the music they make? I mean, its 2021. Music is so available now. More people than ever have diverse tastes.

TS: I think some kinds of people like to put music in a very narrow box, because [it makes them] feel secure. They say we play post-punk and compare us to other post-punk bands, and I find that very uninspiring. Everyone in the band listens to very different music. Me and [saxophonist] Oskar [Carls], we’re classically jazz trained. We went to some music schools. It’s funny to see people like, “Whoa, they listen to country!” For us, it’s so natural. We don’t even think about it.

NT: And listening to the John Prine cover, even lyrically, the themes – there are so many similarities to Viagra Boys there. You mentioned your classical jazz background. You’ve said that it’s sometimes hard to keep your drumming simple when playing with Viagra Boys. Has it gotten easier the longer you’ve played with the band?

TS: It was definitely a challenge. Playing the same beat for 10 minutes sounds easy, but it requires a lot of concentrating. And I think I’ve gotten better at it. For me and all the other guys, we sometimes discuss if there’s going to be a crash or not, leading into the chorus. The drums are really thought out. We’re really picky. And it’s hard to replicate [them] live when you’re full of adrenaline. But if you’re succeeding after five, six minutes, you get [into] this sort of trance mode. It’s been a lot easier after a while, but it’s a funny thing: it’s rare that someone comes up to me and says, “Yeah, great drumming! because I just play the same thing all over again. [laughs]

NT: Was rock drumming more challenging than you had expected? Like, even though it wasn’t jazz, you still had to be on your feet.

NT: Between the band taking off and the pandemic, were you still playing in jazz ensembles?

TS: Me and Oskar, we have a jazz band together with a lot of other people. Viagra Boys has helped us with finding new people to play with. [Viagra Boys] have some stand-ins when members had kids and stuff, and all of our stand-ins had jazz backgrounds, so we ended up starting this Stand-In Boys jazz band.

NT: Sebastian said Welfare Jazz was a weird album to make because you recorded it over a long period of time, across several locations, and you were all in “weird places.” Are you able to speak to what he might have meant by that?

TS: We were doing a lot of touring, so writing the album was not so focused. We recorded some things in our rehearsal space, and in New York, and out in the countryside of Stockholm. The hardest thing for me being on tour is that you lose a lot of inspiration to write music. That’s really hard because that’s basically all my life. And when you don’t have that drive, you feel kind of lost. We did over 150 shows or something, so you really felt inspiration draining. And the album happened during that time, so it was kind of weird.

NT: I imagine also the difficulty of being away from your families.

TS: Yeah. But me and my wife can agree that it was worth it because it feels like [the band is] going some places. [laughs] It’s not playing in a cover band.

NT: It’s not being a welfare jazz musician.

NT: Sebastian says he doesn’t intend to write political songs, he just freestyles whatever comes to his mind. But when the other guys hear his lyrics, do you read anything into them? Do you hear his lyrics and think about how listeners might interpret them?

TS: His lyrics feel so clear. I’m hooked on them immediately, because they feel so easy to understand. I don’t really try to understand them on a deep level. I mean, I’m not a native English-speaking person; I listen to his lyrics a lot, yes, but I don’t go up to him like, “What do you mean here? Some kind of criticism of the government? ‘The frogs’?” It’s just pure enjoyment from start to finish. I love his lyrics. I think they’re amazing.

NT: So from a listening stand point, you’re kind of the same as how he comes up with the lyrics, which is you take them for what they are.

TS: Yeah, exactly. But absolutely, you can see some deeper meaning, of course. We have recorded some more material, and he’s gotten better and better.

NT: I recently spoke with Jason Williamson from Sleaford Mods. Their new album has a couple of their first collaborations, and one’s with Amy Taylor (Amyl and the Sniffers), too. How did your collaboration with her happen?

TS: We get grouped with all these bands, and Amy’s band was one of them, so we knew about them. We met them at several festivals in Europe and hung out with them a lot. We became friends, and it was all Seb’s idea that he wanted to do this cover, and it was a duet.

NT: Has that opened the idea for doing more collaborations? Who’s someone you would like to work with in the future or who you think would work well with the band’s sound?

TS: I don’t know, really. Anyone that has something interesting to say. Run the Jewels, maybe? I’m up for anything.

NT: You could dream all day.

NT: Sebastian has talked about the personal lifestyle changes he’s made between Street Worms and Welfare Jazz. Have you undergone any major changes between the two albums, for better or worse?

TS: No, I was a family man [then], and I’m a family man now. And I’m still lacking a lot of sleep, so I’m just the same person.

NT: And about to be even more of a family man.

TS: Exactly. We all have evolved as musicians, and we work together now as a band better than we ever have before. We’re on a very good level of collaborating. We haven’t been that good before, so it’s very inspiring for the future.