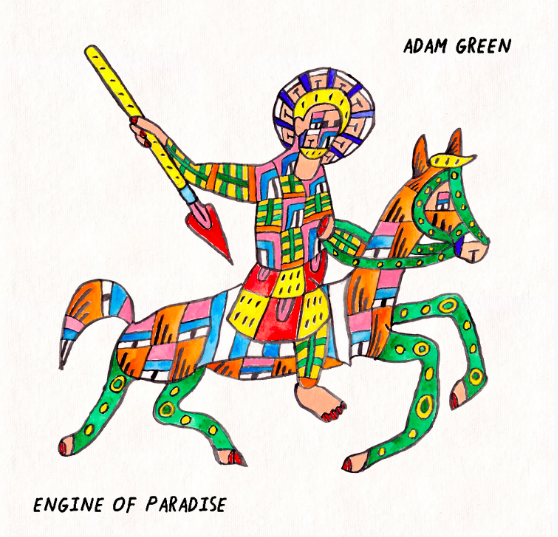 Adam Green has dropped a new video for “Cheating On A Stranger”. Directed by Pete Voelker, was filmed in another universe that Adam discovered. The song contains an eerie backup vocal by Florence Welch. “The song is about finding yourself submerged in a wasteland, some kind of second-life where there are empty replacements for everything you knew. You try to embrace this new world, but the more you squeeze it, the more the air comes out,” says Green.Adam Green’s Engine Of Paradise comes Out Sept. 6th Via 30th Century Records

Along with the release of Green is also releasing his first graphic novel, a psychedelic war epic called “War and Paradise” set in the colorful universe of his film “Adam Green’s Aladdin.” The graphic novel will be released concurrently with the album.

Adam Green is a songwriter, filmmaker, visual artist, and poet. As part of New York’s downtown antifolk scene at the end of the nineties, Green made up one half of The Moldy Peaches, who later enjoyed mainstream success via the 2007 Grammy-winning Juno soundtrack. As a solo artist, Green has recorded 10 albums, many of which have become cult hits. His songs have been performed by artists as diverse as The Libertines, Carla Bruni, Kelly Willis, Dean & Britta, and Will Oldham.

His second feature film, Adam Green’s Aladdin (2016) — an immersive fantasy film starring Macaulay Culkin, Natasha Lyonne, Alia Shawkat, Jack Dishel and Francesco Clemente and shot entirely on papier-mache sets — was described by Buzzfeed.com as “the trippiest movie ever made,” while RogerEbert.com called Aladdin “a movie that belongs inside a museum.” An instant cult hit, the movie was screened theatrically in a midnight movie context, at over a hundred of Green’s concerts around the world, as well as the Andy Warhol Museum in Philadelphia.