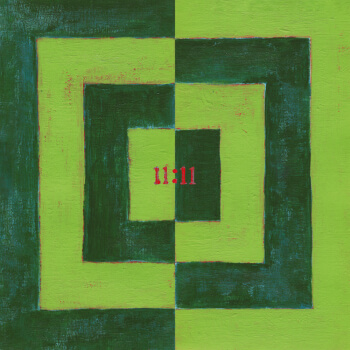 11:11, the simplest pattern, a line of trees, people shoulder to shoulder, the letter ‘I’ itself, the pinegrove, myself. the time that most resembles corduroy, one minute in the morning (& if you’re lucky, again at night) when the portal opens & you briefly see through the ethereal smoke to something actual. I lean the painting against the window. trees wiggle like toothpicks in the background. the painting is absorbed in scene, forest print green couch, knit heathered spring green blanket. watching last summer’s fires glowing in the west through my little glowing rectangle. videos of cops brutalizing people protesting police brutality. this summer’s smoke diaphanous today across the Catskills. Orlando pressed medusalike against the kitchen window. hazy afternoon, but beautiful.

That’s what Evan Stephens Halls writes about Pinegrove’s new 11-track album 11:11. He’s a skilled writer, and his writing has shown up a couple of times, like in his clever and humorous and depressing band film, “Amperland, NY.” But it is his music, a combination of hardcore and country music and indie rock, with his signature voice and prescient lyrics that keeps us coming back for more. I’ve been hooked since Cardinal, and the boys (and girls) never seem to disappoint, or run out of thought-provoking, heart-thrilling material.

Like on many of their other albums, this album is steeped in self-reflection: about the pandemic, about climate change, about being a good (or a bad) friend. Iodine makes a couple of appearances and even has a track named after it. In the song Halls reflects on his pride and being “weighed down.” But iodine seems to reflect some sort of cure or “solution” that we’re running after. “I’m spiraled up inside / my iridescent mind / is reaching up for something pure & or / actual.” There is also the reoccurring image of a ladder to the sky.

Halls’ efforts have always been to live the “good life,” whether that’s loving his neighbor, loving nature, loving his nation, or loving himself. As he strives, something in us strives with him, and after all of his doubts and misgivings, we feel it when he sings, “I wanna be alive / I wanna live my life / out.” In one song he sings, “no one’s gonna rescue us / no one’ll care if we spend our lives up / but I care now / I’m not gonna let you / down.” And in the next he sings, “I let you down today.”

Halls is an expert observer and purveyor of life’s complexity. Senators who won’t act on climate change, but highlight their efforts to curb crime. The darkness and depression found in the woods where he seeks comfort. “& I’m walking / outside nothing feels good / take a blue meander into the woods / where nothing’s shining like I feel it should.” He seeks comfort where it can’t be found, and offers comfort where we need it most. And then talks about how little comfort he’s able to add to a crumbling and desperate world. At least someone’s trying, right?

The music on the album always shines. With full arrangements on every song (to contrast with many of the stripped down videos of Halls and just his acoustic that they’ve released for this album), it is a visceral treat. Whether it’s lap steel or distorted guitar, piano or Halls’ howling voice, they always know how to fill the space. And this, like all of their other albums, promises to be a dynamic and moving live show.

Whether it’s the fate of the world, the fate of a country, or the fate of the individual, this album, more than any other of Pinegrove’s albums, communicates that we are in a dire place and like the Lorax says, it’ll take people who really care to turn this fateful ship around. But Halls’ poetry, (he takes on the age old challenge of rhyming “orange” in this album to great affect,) never beats you over the head, but communicates the world as he sees and grapples with it. His music is a wrestling match, and even if he (and we all) get pinned in the end, at least he put up a worthy fight.