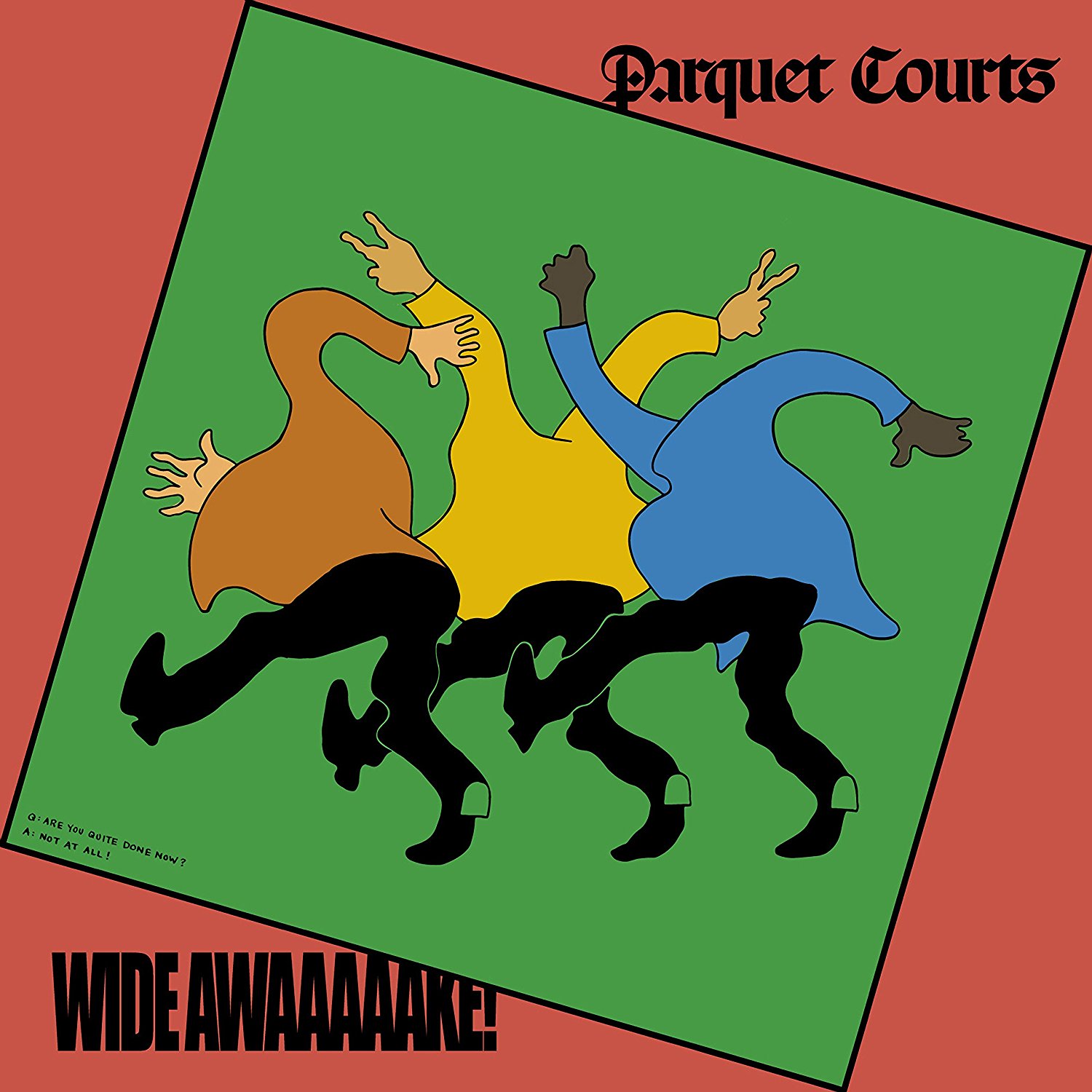 For album six, Parquet Courts have done what they do best, what you least expect; ever the contentious bunch ‘Wide Awake!” is a combative, damning state of the world address that’s fun (yep you read that right, it’s fun!). The record is both lyrically progressive and sonically evolutionary whilst still maintaining the band’s ‘pick up ‘n’ play’ scrappiness. Oh yeah, and they roped in some guy called Danger Mouse on production, well, the A- list producer contacted the NYC band. You can hear the famed knob-twiddler’s trademark taut drumming and creaking organ sound throughout ‘Wide Awake!” but it’s not the Danger Mouse show by any means; this is Parquet Courts at their most free and unencumbered.

‘Wide Awake!’ rolls out as zeitgeist for right now; musically it’s a varied animal, touching on the band’s notorious garage rock but it also pivots on a deft funkiness, as well as being hazy and melancholy, while there are times narratively where the quartet’s ire burns at a scorching temperature. ‘Violence’ a song propelled by interlocking bass rumbles, precise drum licks and head-bobbing organ trills has frontman Andrew Savage blurting out his infuriated lyrics like a man who can’t get his words out quick enough. Taking on a hip-hop like rapidity, Savage name checks himself and in doing so delivers a knockout blow right on the nose of one of modern day’s most omnipresent problems “Savage is my name/because savage is how I feel when my radio wakes me up with the words ‘suspected gunman’” while the track’s hook-line is a faux-horror-like voice stating “violence is daily life” and when you think of recent shootings in the States, bombing runs in Syria and the constant threat of ISIS, you can’t help but be sucked in by Savage’s macabre observations. I said this album was fun, right?! ‘Before The Water Gets Too High’ dials down the aural intensity for a woozy organ and bass inflected rumble as Savage’s sardonic tone depicts a culture of greed and ultimately when the money is gone and it’s a level playing field – what’ll happen to the powers that be “before the water gets too high/add up the bribes you take/and no time can be bought by the profits that you make/before the waters gets too high/to float the powers that be/or is it someone else’s job until the rich are refugees?”. Quick-fire, stop-start punk rock is the fuel in the tank where ‘Almost Had To Start A Fight/In and Out Of Patience’ is concerned, a song that came to life when Savage looked out into an audience in Atlanta, only to see someone wearing one of Trump’s ‘Make America Great Again’ caps. This is where the band are pondering whether to react with force or to let it slide that one of their fans would also be a backer of the abomination that’s leading the free world into oblivion. Should they lower themselves to Trump’s standards or rise above it as Savage can be heard barking about being “tired of being polite” as if wanting to tell the Trump supporter to get the fuck out of their show.

Ok, so you’re probably thinking ‘Wide Awake!’ doesn’t sound fun at all – well it is! The New Yorkers have done what all great bands do, merge poignant, provocative lyrics with upbeat music; ‘Normalization’ rattles and rolls with a garage-rock strut but under the surface the band are questioning what is normal and to quote Savage “what do I call bullshit?”. Ramping up a quasi-carnival vibe the title track injects an insatiable groove that’s buoyed by choppy guitars, a funk bassline and a liberal dollop of percussion. Then you have a Gnarls Barkley penchant that bleeds into ‘NYC Observations’ trembling, serrated guitar bursts and the weird hymnal bounce of ‘Back To Earth’. The album is closed off by ‘Tenderness’ a song that’s indebted to a summer-breeze piano line but it has Savage ruminating at the ever-increasing march of time and how modern life has become a vacuous voyage through consumerism and nihilism.

‘Wide Awake!’ is the sound of band unafraid to push themselves, both creatively and socio-politically. In these uncertain, homogenised times – God bless Parquet Courts.