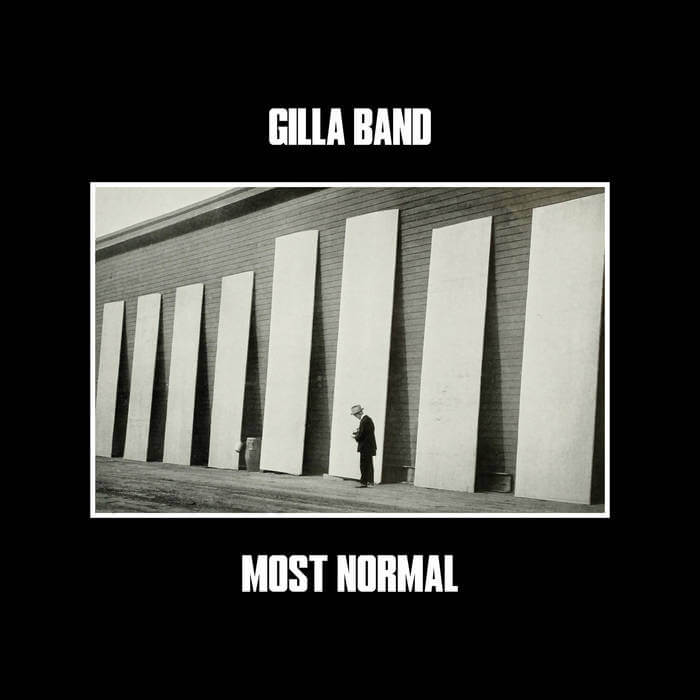 Gilla Band’s (FKA Girl Band) sound is forged in a world of extremes. It’s where violent sonics collide with acerbic fragments to create a landscape that’s volatile and nightmarish. Noise rock, techno, post-rock, shoegaze and industrial tendencies jar against one another to manifest a tour-de-force through aural manipulation and something closely resembling an endurance test for the listener.

This might all sound disparaging towards the Dublin quartet but that couldn’t be further from the truth. The unit’s lust to push themselves creatively is what makes them such a beguiling prospect and if we’re talking about extremes, their third LP ‘Most Normal’ finds them challenging their own boundaries with wanton abandon.

Gilla Band haven’t had the easiest start to their career; after releasing their debut LP ‘Holding Hands with Jamie’ in 2015, frontman Dara Kiely’s mental health was fraying at the seams as 2017 began, which lead the group to cancel all band commitments until Kiely rehabilitated himself. 2019 saw the quartet remerge with ‘The Talkies’ but Covid put paid to the album’s promotion. Suffice to say Gilla Band’s lifespan hasn’t been without its bumps in the road.

‘Most Normal’ is Gilla Band burrowing into the surrealism of dreams and all their befuddling peculiarities. Kiely provides some context around the album’s narrative “reality gets distorted in a dream. An elephant might walk past you and say: “how are you?” and you just accept it.” These themes are conveyed by the outfit’s penchant for noise and their frontman’s stream of consciousness lyrics, which sometimes appear random, while on other tracks whack the nail firmly on the head, or in some cases are indiscernible underneath the group’s cacophonous racket. ‘The Gum’, the record’s opener, is a volcanic eruption of violent techno-infused noise rock that has Kiely howling like a man possessed, while ‘Backwash’s undulating noise manifests like a battle between serenity and chaos with light and dark textures locked in a perpetual death grip. During the album’s midsection there’s a 1-2 punch of ‘The Weirds’ and ‘I Was Away’ that typifies ‘Most Normal’s sporadic tendencies. Both numbers undulate between ambient undertones and devilish blasts of noise which push the songs to the verge of collapse. ‘Almost Soon’ is a good example of Kiely’s unrestrained word vomit as he blurts out lyrics like “you’re dead but not dead enough” and “what the fuck’s in my eye?” while harsh static waves converge with scratchy shards of jagged guitar. Album closer ‘Post Ryan’ is the record at its most direct. This is where Kiely lays himself bare and conveys his mental health vulnerabilities. “I’m in-between breakdowns” and “I’m just the same prick” speak for themselves and the soul searching “took it for granted/gonna end up homeless/hid behind the surreal/I’m a bit too much” certainly illustrate the frontman’s recent state of mind and the issues he’s thankfully overcome.

You’ve got to love the dichotomy of the album being entitled ‘Most Normal’ because Gilla Band’s third outing is anything but ordinary.