Heaps are a collective from the Kawartha Lakes, Ontario. Today, the quartet has shared their new single “You Were There.” The track is off the quartet’s forthcoming release What Is Heaps, out August 28, via Birthday Cake. Recorded at Union Sound with Leon Taheny (Fucked Up, Owen Pallett, Weaves) and James Bunton (Donovan Woods, For Esmé, Vivek Shraya), the result is an eclectic, rhythmically swelling collection of conversations and questions as observers in uncertainty

vocalist Warren Frank on “You Were There:”

““You Were There” is an attempt to understand and process fear. Can we ever move past our insecurities if we won’t first acknowledge them? The song works to navigate the dynamic that creating and performing music can bring about. Can one be authentically vulnerable when they know an audience will be receiving their work? How can one prepare themselves to handle the flippant negativity that can so easily come from those who care so much less than you? It’s a rally for ourselves. A reminder to abandon self-consciousness and care deeply, whether people are looking or not.”

The video for “You Were There” came about as a result of being a band in COVID-19. “With no shows to play over these last few months, we have had to readjust what the ‘business’ and everyday life of the band looks like,” the band says. “No shows means less income, which means we can’t hire anyone to do video work with us. The inability to hire outside work challenged us to prepare for our upcoming releases in a more D.I.Y way than ever. We looked inward and decided to take on the entire production of the video by ourselves, from directing and filming to editing and colour correcting. The experience has produced a video that we are very proud of and exemplifies what our group is about; collaborative creation. Through making this video we pushed what we thought our group was creatively capable of and will inform our creative process outside of song-writing in a way we likely couldn’t have imagined before.”

In addition to the new single “You Were There”, the band are also sharing another new zine to accompany the track, just as they had done with previous singles “Hazy Shores”, inspired by the current global situation. “As the song ‘You Were There’ focuses on fear and doubt, the zine released alongside the track serves to highlight specific areas of discomfort experienced by each band-member,” the band says. “The hope is that speaking vulnerably will allow the band to connect with audiences in a new, uncommon way. Use of textural noise and grain, paired with distorted imagery and an infusion of ‘controlled-chaos’ aims to showcase the frantic presence that fear and self-consciousness can impose on the minds of the affected, slowly eroding the thoughts and goals that were once clear.”

Heaps
What Is Heaps
Birthday Cake

Softly
You Were There
Get It Back
Foreign Time
Slowly, Surely
Salt
A Warm Request
Hazy Shores
Crime
So Soon
Someday

Pre-save What is Heaps here 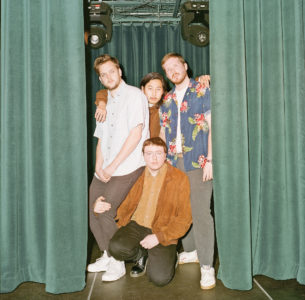