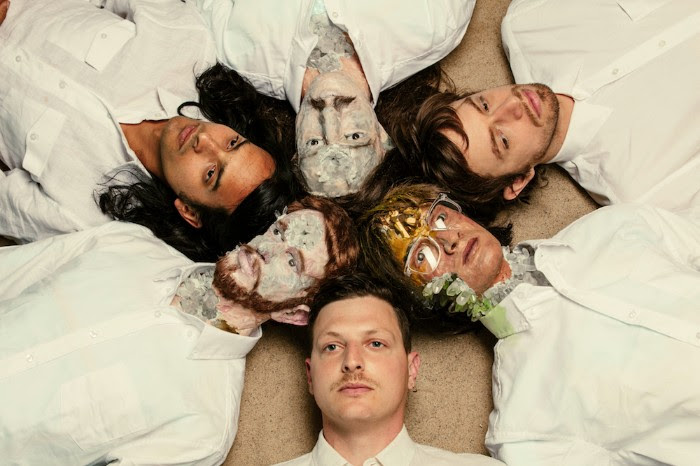 Today Yeasayer reveals the complete gatefold album artwork for their fourth studio album, Amen & Goodbye, out on April 1, 2016 on Mute. The album design features sculptures, actors, and digital images by the New York-based Canadian artist David Altmejd, who worked directly with the group to create the record sleeve.

Moloch, an ancient god of child sacrifice, a silent movie starlet, a breastfeeding mother, characters from the band’s songs past and present, and various other pop-culture and religious characters all take the stage for the cover art. “It’s Sgt Pepper meets Hieronymous Bosch meets Dali meets PeeWee’s Playhouse” say Yeasayer. Altmejd, whose work is a major influence on the band, said the following about their collaboration: “I’m not very comfortable thinking about image and graphic design. I decided to offer them a sort of landscape filled with as many details as possible. I thought about a series of objects that would be inspired by characters that came from Yeasayer’s albums… but also characters that come from the news. There’s really fake looking sculptures, there’s printouts representing cartoony characters, there’s naked people… For me what’s very important is that the image offers enough visually for people to be really absorbed in the observation of details.”

Yeasayer also share a trailer today, entitled “Amen & Goodbye 6.” The new teaser is a more comprehensive behind-the-scenes peek at details from Altmejd’s tableau, ending with a final zoom out to reveal the entire mise-en-scène.

Amen & Goodbye is the follow-up to 2012’s Fragrant World. Moving away from a digital-heavy approach, Yeasayer recorded Amen & Goodbye to tape at Outlier Inn Studio in upstate New York, then brought on board Joey Waronker (drummer – Atoms For Peace / Beck) to deconstruct everything to make the final document.