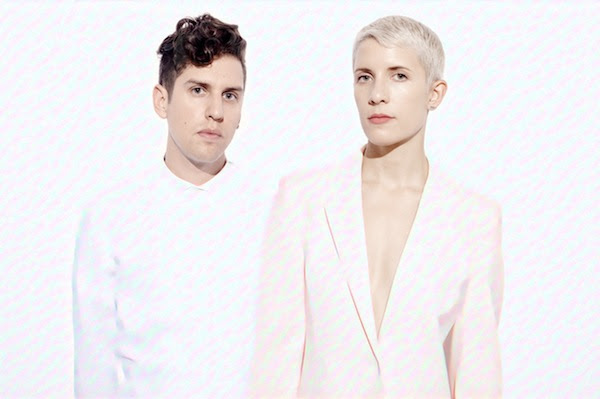 YACHT are excited to announce their new album, I Thought The Future Would Be Cooler, out October 16th on Downtown Records.

In an exclusive interview, YACHT’s figureheads, Jona Bechtolt and Claire L. Evans, spoke with Billboard about the album and the unique technological subversions they have been executing around its release.

For those who haven’t been following along: YACHT first teased the album by dropping a Google Maps pin on a location in LA, which led fans to a billboard that says, “I THOUGHT THE FUTURE WOULD BE COOLER.” The day of the announcement, Claire & Jona stood at the foot of the billboard interacting with fans IRL and streaming live via Periscope.

Finally, the duo released the album’s artwork, shot by photographer and filmmaker Luke Gilford, by sending an edition of 300 prints of the artwork to fans directly, via fax. To do this, they built a web app that finds fans’ location and sends a fax to the nearest retail office center (FedEx, Staples, etc) for them to pick up. Each fax was individually numbered and included a cover sheet essay. The fax edition disappeared quickly. More info about the project can be read in an exclusive feature on The Verge.

YACHT’s new album, I Thought The Future Would Be Cooler, is a critique of the 21st century. YACHT’s knowing references to technology, feminism, and media are layered in complex arrangements in songs about holograms and phones, police violence and identity, sex and the future.

I Thought The Future Would Be Cooler is the first YACHT album that Bechtolt and Evans didn’t create in a vacuum. The pair wrote the album from the ground up with their longtime collaborator and bandmate Rob Kieswetter, who also produced the album with Bechtolt (a first: Bechtolt has been YACHT’s sole producer since 2002). The result is a surprising and heterogeneous collection of songs. Grammy-winning Irish producer Jacknife Lee (REM, Bloc Party, Robbie Williams, Taylor Swift) stepped in as a hypercolor shaman of sorts, creating his own album-wide credit of “objective overseer and structural mechanic.” The album’s title track was co-produced with Justin Meldal-Johnsen (Beck, M83, Tegan and Sara) and its string arrangement was put together by pop polymath Jherek Bischoff (David Byrne, Caetano Veloso, Parenthetical Girls). The album was recorded over two years in Los Angeles at a handful of studios (Jacknife’s technicolor compound in Topanga Canyon, Meldal-Johnsen’s studio in Atwater Village, Red Bull’s studio in Santa Monica, and YACHT’s home studio) as well as in a former cavalry bunker in Marfa, Texas, at the Marfa Recording Company.

The band will be touring this fall, bringing their computer rock show to New York, Los Angeles, and more—all dates are below.