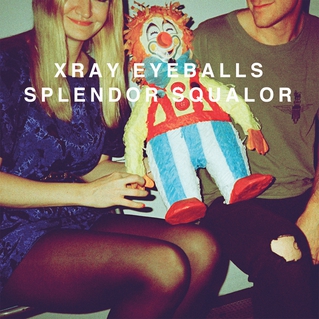 There is nothing there. If you’re gonna do something, do it all the way – that’s what I always say.X-Ray Eyeballs’ sophomore LP is one of the safest records I’ve ever heard. Plenty of exciting bands use their naivete to their advantage, and break conventional songwriting rules without hesitation, because they don’t know the rules.This band clearly doesn’t know the rules, but they’re pretending they do. It’s not aggressive enough. It’s not cute enough. It’s just as far into the middle of the road as you can get. I remember being in bands in middle school and high school that use the same formula these guys do: picking three guitar chords at random and running it through a the funniest effect built into your pawn shop Digitech pedal station. I remember it sucking.

Like I said, it’s not necessarily a bad thing to be unaware of the rules. Some people know what an orthodox pop song sounds like, and proceed to do what you don’t expect. This isn’t that. “Gator” is one of those middle school compositions. That progression is dissonant if I’ve ever heard dissonance. Of course, disharmony can be complimented beautifully if it’s bookended with an explosive release at its tail. There’s no tail on this gator.It just keeps going, and it’s meaningless. The New Yorkers explore that concept–vacant repetition–until you want to throw your waffle iron through the nearest window on album closer “Summer Daze”. A girl and a boy alternate various nostalgic phrases like “ice cream”, “Diet Coke”, “flip-flop” and “Coke” in a particularly obnoxious monotone. This is the longest song on the record at nearly five minutes. Inconceivable.

Surely there’s something worth another listen on this record. For all the ink I’ve just spilt about how their songwriting inability and lackluster musicianship, there is still something to be said about putting out a record (although I have to ask, why the hell are some bands so lazy when it comes to album artwork? You can’t think of anything better than a found photograph and the title in Helvetica?). I have a hard time being critical of any piece of music that a group of people worked hard on releasing; it takes courage and endurance, and even if the result is a pile of turds, they’re going for it. But again… I don’t feel like they’re actually going for it. I think that’s what makes me so mad when I listen to this record. The band is clearly enjoying a certain degree of success on Kanine Records, but I don’t get a sense of caveman joy like you might experience when listening to Beat Happening or the Thermals, both of whom employ extremely simple formulas and repeat it, album after album. I don’t believe in XRay Eyeballs. This just feels phoned in.