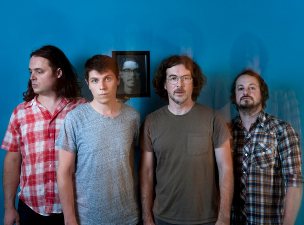 Chicago band Health&Beauty have signed to Wichita Recordings, who will release their forthcoming album
NO SCARE on August 5.

Today, the band have shared the lead-single from NO SCARE, “Wartime.” The original version of the song featured a lyric and melody borrowed from Neil Young’s “Hey Babe” (from American Stars and Bars) which Neil would not clear for usage and which were replaced instead with a pedal steel solo, played by Matt Schneider of Moon Bros, and new vocals sung by Emme Williams of Fastness. Brian J Sulpizio said the following about the track:

“A young man who lived in my neighborhood in Chicago was about to graduate high school and he was telling me about how the best option for him was to sign up for the Army. He was also considering becoming a truck driver but I never saw him after the one time so I don’t know what he decided. I wrote the song with the volunteer army in mind. I really liked having the Neil Young line at the end; tied it together in a way. We’re still doing that live, which I think is legal.”

Health&Beauty is the name under which Brian J Sulpizio has released music since 2003. The current lineup of the group has been playing together since 2012, featuring pianist Ben Boye (a constant collaborator since 2009, who also plays with Will Oldham, Angel Olsen and many others) and drummer Frank Rosaly (a regular collaborator with Peter Brotzmann and many other jazz and experimental music greats). This version of the group along with bassist Anton Hatwich, made up the band on Ryley Walker’s Primrose Green.