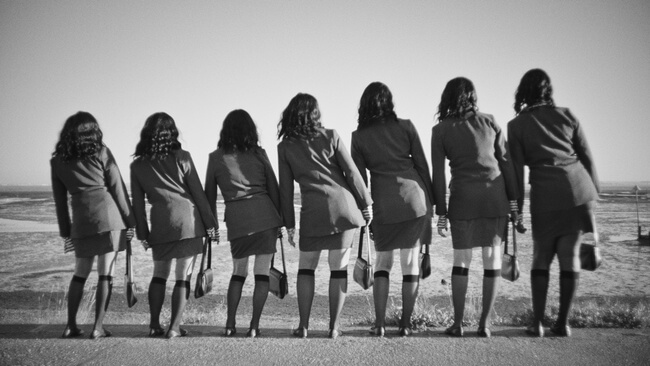 Warpaint have shared a new video for their track, “Hips,” directed by Jim Hosking, the song is lifted from their first album in six years, Radiate Like This.

“’Hips’ has a scuttling intensity to it,” Hosking says. “It sounds like someone desperately trying to find something. Or at least that’s what it seemed to me. I listened to it repeatedly and kept seeing women desperately searching for each other in a seaside town. Ideas present themselves and it’s not about logic or reason, it’s about emotion. And here the emotion suggested identically dressed women finding each other in an old seaside town in England called Southend On Sea. “ “We are thrilled to share this strange and beautiful video for ‘Hips’ from the brilliant mind of Jim Hosking,” the band says. “Give it a watch.”

Warpaint is currently on the Radiate Like This Tour, which picks back up in North America tonight at The Observatory in Santa Ana, California following a run of European dates. Goldensuns and JennyLee will support on upcoming dates.

Physically separated by the pandemic in 2020, the band began work on what would turn out to be a wholly different Warpaint album. Each musician recorded her parts separately—often in makeshift home studios—before sending on to the next, creating songs layer by layer. Deciding to delay the release until they could tour allowed them to further hone each track, spending more time building and rebuilding than they had in the past. The result is a body of work that is sharper and more focused than their previous projects but still captures what has always been the magic of Warpaint—the delicate interplay of four separate parts coalescing in motion.