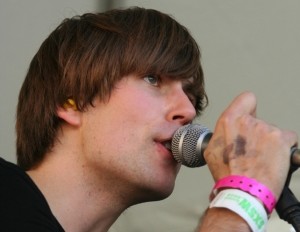 From the safety of a tour van somewhere down the West Coast, Islands frontman Nick Thorburn took a few patient moments to explain to Northern Transmission’s Julie Colero how a mellotron works and how its sound, combined with the cosmic delivery of the perfect cover art, came to shape the band’s latest album, Ski Mask.

JC: I read that your last album, A Sleep & A Forgetting, was an album written with “pain and a piano”. If you had to choose one emotion and one instrument to represent Ski Mask, what would they be, and why?

NT: I would say… murderous rage and a mellotron? I’m just trying to be alliterative – I don’t think murderous rage is accurate. But there is a lot of mellotron on the record, though… Maybe morose? Morbid? Moribund? The mellotron is not something we have access to on a regular basis, but we were in the studio, where they had a real, live mellotron. For Islands, in previous years, we’ve had more instrumentation – strings, violin – a little more classical. Now we’ve whittled the band down to four members, and something like the mellotron, its whole purpose is to create that instrumentation. And that’s exactly what we used it for – really, for its primary purpose. It’s a keyboard that was built in the early 60s and it simulates different instruments. There’s a component of the mellotron and you put in a piece of tape that is a recording of each note played on that instrument corresponding to the notes on the piano. It’s a very old-fashioned, but at the same time pretty advanced and cool piece of technology. It gives a real sample of the instrument. We couldn’t afford a marimba player on “Wave Forms,” so we popped in the marimba tape loop.

JC: Had you had the chance to play with one before?

NT: They make simulations, digital, fake plug-inny ones, and I’d fooled around with those. But this was maybe the first time I’d used a real one. You try not to get carried away. It’s just that it’s been done – the Zombies, the Beatles. They put their name on it. It’s a very trademarked sound.

JC: How will this Mellotron-heavy approach change the make-up of the band on stage?

NT: We’ve got a lot of keyboards on this tour, a lot of synthesizers. The Gordon Brothers, who are the instrumentalists who have been with me for the last three records, they really just are trying to handle all that stuff, whether it’s fit to play with a synthesizer or not. They’re handling all that instrumentation. We’re about to start. We have played a couple of these songs live in the past, but, for the most part, these songs we haven’t even played outside of recording the record. We made this record a while ago, and we’re just now re-learning the songs that we hadn’t thought about for a while. It all feels very fresh.

JC: Have you already moved on to composing more tracks since this album came together?

NT: Yeah, we have a few extra songs. Well, I have a few. I haven’t brought them to the band yet officially. Maybe six songs for the next record. We’ll see if they stand up, if they hold up for that long. Up until now, yeah. Evan and Jordie [Gordon] are more than just session players; they’re terrific songwriters in their own rights. I have floated the idea by them that we actually write together, do some collaborating, or that they maybe write something and bring it to me. Until now, Islands has been this very solitary exercise. I thought it might be refreshing to open it up, to keep it from being too stagnant. It’s too much of a monologue. I thought it might be cool to have more of a dialogue with the band. For now what we have is [that] I have six songs, and generally I write the songs and then bring them to the band in whatever state of completion they’re in, and they always bring something magical to the process.

JC: I read about your trip in April of this year, where the band went to Malawi and participated in an after school musical education program. Can you talk a little bit about that experience?

NT: It was insane. It was my first time in Africa, and it was quite a shock, quite a change of lifestyle. I feel like I run the risk of sound naïve or something, or that I’ll have a first-world block over things, but despite the deep poverty, it seemed like a really positive place. We were in a small village in the country of Malawi, and there was no running water, no electricity, and most people just lived in these thatched-roofed huts, and they didn’t have anything. But what they did have was this sense of community that was way more in touch with their own happiness and their own life than anyone in North America. Coming back to North America was so depressing. Everyone’s so caught up in their own narcissism. It was drastically different coming back here and it made me sort of depressed for a few weeks. L.A.’s pretty much the extreme.

JC: You’ve done quite a bit of coastal hopping, from Vancouver Island to Montreal to New York to L.A. Do you get different inspirations and passions in each of these different cities? Or is it more about looking for a change of pace every few years?

NT: I like to keep moving, I guess. Basically, I’m a wanted criminal and I’ve got to keep on my toes because they’re after me. I don’t know…I just sort of let the events unfold. All my reasons for moving around have been, you know, circumstantial. Events would happen in my life and I would be confronted by a decision to move, whether it was for relationships –to get out of relationships, or to get into them, or whatever – that’s the thing. I left Vancouver Island, I wanted to get as far away from my home town of Campbell River as possible. It’s really fortunate that I was able to go to Montreal. It was a huge growing opportunity. I guess I just like fresh, new things, new environments. But L.A., I think I’ll be here for a while.

JC: We’re talking fresh and new – you’ve mentioned freshness a couple of times. Your mantra for the band is “Islands are forever.” Which elements of the band are about transition and change, and which ones are about permanence?

NT: I should have a thesaurus handy if I keep saying the word “fresh”! I think there are constants, like in any part of life, that orbit around us. And then there’s change, which keeps things new and different. The most obvious constant in Islands is me. Everything else is subject to change. And that is what it is. I try to make everything else feel different and exciting. Mostly for me – I’m not doing this to keep anyone else interested, but I like the idea of being able to move within these confines and limitations that I have to try and achieve new things. I like trying to discover different types of songs or to make different kinds of records. The idea is to continue using the name Islands as a banner.

JC: Finally, can you explain what we are looking at on the cover of your new album? It looks as though you’ve somehow found a photographic realization of your own comic characters.

NT: It is a still from a film from 1988 called “Ozone! Attack of the Redneck Mutants”. It’s a B-Movie, beyond B. It’s about as low-budget as you can imagine, but it’s really quite something. It’s a home-movie style horror movie and I came across the image online on an art blog or something and just fell immediately in love with it, probably for that reason, that it’s a manifestation of my inner mind, and the director of the film, Matt Devlen, was kind enough to let me use the image, but it’s just this weird… that’s what I liked about it, actually. I couldn’t make sense of it. His face, it’s melting, and it looks like a galaxy of stars. I saw that image maybe two-and-a-half years ago, and I knew that that would be the cover, and I knew that the album would be called Ski Mask. It was kind of all cosmic.